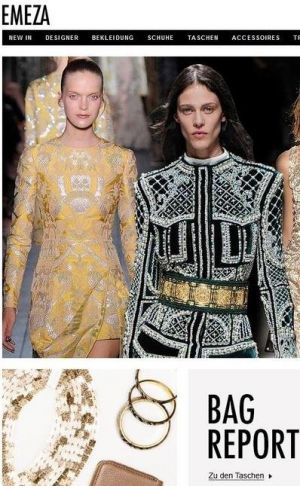 by Juliette Tafreschi — January 07, 2013
Emeza is the new luxury shopping platform of online retailer Zalando. In comparison to the previous aggressive commercial campaigns for the Zalando website, this time the company seems to choose a calmly soft launch. According to a Zalando speaker the press release and an official launch will be out at the end of February.

At the moment Emeza offers only womenswear, shoes, bags and accessories from about 30 designers such as 7 for All Mankind, DKNY, Halston Heritage, Just Cavalli, Love Moschino, Michael Kors und See by Chloé. Zalando, through Emeza, are aiming at a  new target group. Some brands from Zalando Premium e.g. 7 for all Mankind, DKNY, Michael Kors and Missoni, are overlapping with Emeza. The exact difference between Zalando Premium and Emeza is yet to be answered by the company at the moment, however plans to avoid an overlap between the two online platforms have been made.

Delivery and returns are free at Emeza. The conversion period is 30 days. CEOs of Emeza are Zalando CEOs Robert Gentz, David Schneider and Rubin Ritter.