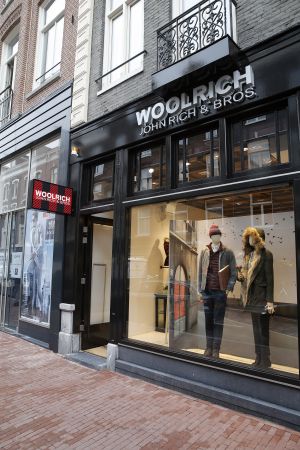 Woolrich to debut with a new store concept

Most recent openings of the premium sportswear brand are their second flagship store that opened in The Netherlands, in the heart of Amsterdam, and its second American store, in Boston.

After 2014, when they opened flagship stores in Prague, Hamburg, Sylt, Tokyo, New York and Brescia, for 2015 they are focusing on both Europe, including Amsterdam and Berlin, and the US, in Boston. The expansion program managed by WP Lavori in Corso, has planned openings in Italy, Europe, US, Canada and Japan with the aim to reach a total of 80 stores by 2020.

The new Amsterdam Woolrich Store has opened in one of the most important fashion shopping districts, a few steps away from Museum Plein, in PC Hoofstraat 36. On 190-sq-meters, spread over two levels, the street level one is dominated by a huge daylight glass ceiling. Its basement floor is smaller and hosts a small lounge area.

This store is characterized by a new image and was designed by prestigious Japanese architecture studio Wonderwall under Masamichi Katayama’s direction. It is their second Dutch store after Maastricht which will soon be followed by other store openings in Benelux.

The Woolrich Store in Boston opened at 299 in Newbury Street, in the city’s main shopping street. This 70-sq.-meter location has opened inside a historic palace with huge window panes. It is subdivided in three rooms that mix contemporary and heritage design together.

After the opening of the second American store the brand plans to open in San Francisco, Chicago and Aspen.