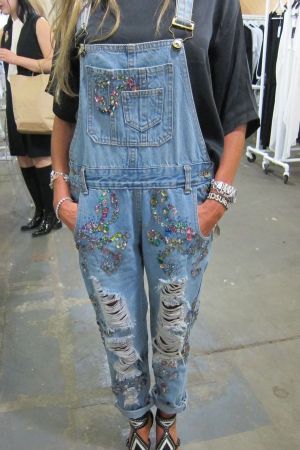 by Christopher Blomquist — September 24, 2015
Although there was a slight feeling of fall in the air, the focus was on spring 2016 at the women’s trade shows in New York, which officially wrapped with the final day of Coterie’s three-day run on Monday. As usual, there was a vast, enormous array of offerings across multiple shows, making it pretty impossible to see everything . Here are highlights from three of the main events: Coterie, Capsule/Axis and Designers and Agents.

Scroll down to view links to all trade show galleries. 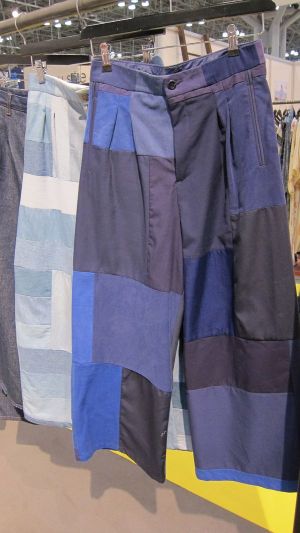 Rodebjer patchwork at Coterie
Spanning three levels and featuring more than 1,400 designers, UBM Advanstar’s Coterie show returned to the Javits Center for a three-day run Saturday to Monday. New to the show was the Active @ Coterie section, an area for brands such as Beyond Yoga, Steve Madden Activewear and For The Win that bridge contemporary sportswear and activewear. As always, newness was also found in the TMRW section for up-and-coming brands. Highlights this season included J. Won, a cute and affordable line based in London, Suzie Winkle, another London-based brand getting buzz and testing the US waters for the first time, and Rxmance, a 10-year-old line of T-shirts and tops that spoofed school athleticwear this season with “team shirts” for sports such as Basket Weaving. Swedish brand Rodebjer was also in TMRW and impressed with its patchwork denim creations for the season.

Key premium denim brands from Paige and Hudson to 7 for All Mankind to DL 1961 showed in the main section and offered mostly distressed or retro looks for spring. DL 1961 introduced its new line of women’s collared shirts, The Blue Shirt Shop, which are in natural fibers and will retail for $158. Paige showed suede jackets and sweet sheer tie-front tops as complements to its denim. Hudson had a wide variety of looks from nautical stripes to neon-colored jeans while Ström offered the standout piece of the show, a denim jacket with open-weave vertical denim strips at the bottom. Another denim highlight at Coterie: a “best of the season” Isko-sponsored exhibition called “Blue” which returned for the second time. It welcomed visitors in the front lobby and whet their appetites for all the splendid denim looks to be seen inside the show. 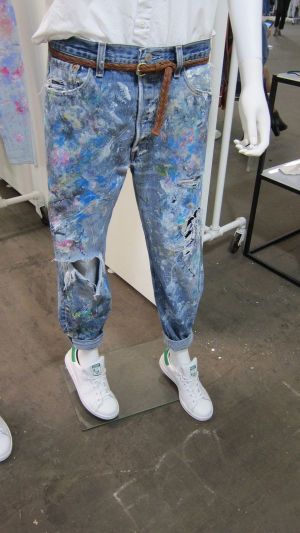 Rialto Jean Project at Capsule
Capsule held the biggest version of its New York women’s show (with approximately 700 brands) ever this season with a three-day run at Pier 94. Although the show was heavy on contemporary up-and-comers and featured a large accessories section, there were also notable denim brands to see there, including Etienne Marcel, Cult of Individuality , Neuw, top-selling Japanese brand Red Card and Naked & Famous, which is putting new emphasis on its women’s offerings. Cult of Individuality, described by sales rep Charles Anderson as “the anti-basics company,” reported that white denim and destroyed looks were key trends for spring 2016. Eye-catching denim looks were also seen at new Italian brand Mad Almadal, which specializes in hand-embroidered destroyed jeans, and Rialto Jean Project, a new line where creative director Erin Feniger makes one-of-a-kind designs by hand-painting or hand-embroidering vintage denim. Rialto is already stocked by such accounts as Barneys, Lane Crawford and Nordstrom.

At Axis, a technically separate show of about 100 brands that shared space with Capsule, a slightly younger customer was the target. Key choices for her were the cute chambray looks from New Zealand brand Thing Thing and the trendy, directional pieces from new LA brand Hidden Denim, which offered a slew of destroyed and distressed shorts, jeans and dresses and affordable price points.

DESIGNERS AND AGENTS
Even early on Saturday morning, the second day of the show, the (admittedly narrow) aisles at Designers and Agents, once again held at two nearby locations in Chelsea, were filled with eager buyers. Exhibitors said that the show had been well attended, especially from Japanese accounts. D&A once again featured mostly smaller clothing and accessories brands that are perfect fits for contemporary women’s boutiques but no big heavy hitters, which only adds to the event’s charm. Two notable D&A exhibitors were Banago, a colorful line of bags from The Philippines that uses straw or recycled plastic bags to create sturdy totes and other designs, and Italian brand Closed, which offered a sophisticated collection based on 1970s-inspired safari looks.