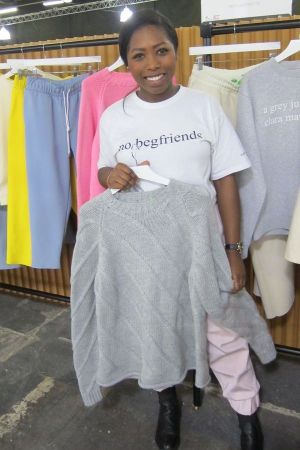 What New York's men trade shows had on offer for fall'16

by Christopher Blomquist — February 02, 2016
The fall/winter 2016-17 round of New York’s menswear trade shows, which concluded on Thursday evening, were definitely a mixed bag this season. Those that ran Sunday through Tuesday (Project and MRket) were impacted by the blizzard and got a late start on their first day–one that all exhibitors said was extremely slow due to the weather. The snow was mostly cleared for those that ran Tuesday through Thursday (Liberty, Capsule and MAN) yet many exhibitors said that foot traffic was still off this season. Here’s a look at specific highlights from each show.


Scroll down to view links to all trade show galleries.


MRKET
MRket returned to the Javits Center with a fresh new look, including completely redesigned brighter, whiter booths. The show also launched a new section in its Vanguards Gallery area called Move, which was co-sponsored by the Equinox gym and fitness brand and featured eight activewear brands such as Brandblack, Masterclass Apparel and Rhone. Other noteworthy new brands on display included Alstad, a line of handmade leather accessories from Orange County, Bucks Club, a line of Italian-inspired but Made in the USA belts and shoes that retail for $139 and $399 respectively, and Tumi Outerwear, a licensee of the famous bag line. Made for travel, Tumi’s Pax series of lightweight down jackets fold up into a plane-ready neck pillows and retail for $195 each. Other impressive outerwear was shown by Benson and Cockpit USA, which offered coats named after the US Army’s Tenth Mountain Division, a long leather trench inspired by zeppelin pilots and a blue shearling jacket created with hip Brooklyn brand and store Kinfolk. 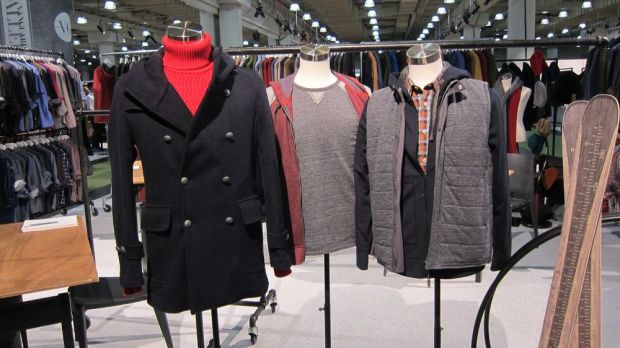 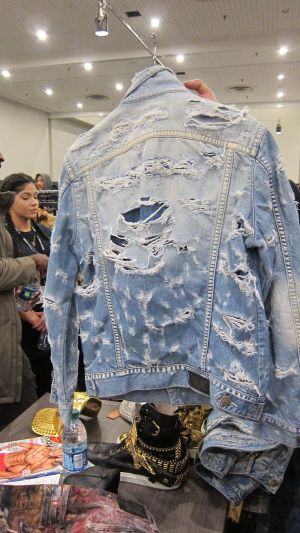 Robin's Jean at Project
Featuring approximately 140 brands this season, Project was a tightly edited show this time. Although it was extremely quiet on Sunday, most exhibitors said on Tuesday, the show’s last day, that traffic had been brisk. Victor Lytvinenko of Raleigh Denim Workshop reported that his brand booked about 35 more sales appointments than usual at Project this season and said that sales of standard denim compared to other bottoms offerings remained strong for the label. Denim was also the main ingredient at S.M.N., a completely brand new LA-based jeans line that “believes in the simplicity and beauty of the five-pocket jean” and which stands for Simple, Modern, Nonpareil. It uses Japanese denim and produces in the US and Japan with retail prices running from $184 to $250 for Made in the USA jeans and $358 and up for Made in Japan models. Other jeans-centric brands at Project included Paige, which showed plaid shirt and new cotton tees along with its jeans, Robin’s Jean, which again offered its signature blinged out looks and lots of distressing, and Gilded Age, which had flannel-lined corduroy pants as a highlight for fall.

One of the best collections at Project was from Baldwin. Designer Matt Baldwin explained that being a CFDA/Vogue Fashion Fund Finalist last year forced him to really up his aesthetic and quality (and price point) for the season and his fall offering is his most sophisticated yet with a wide range of luxe fabrics and materials in addition to denim. 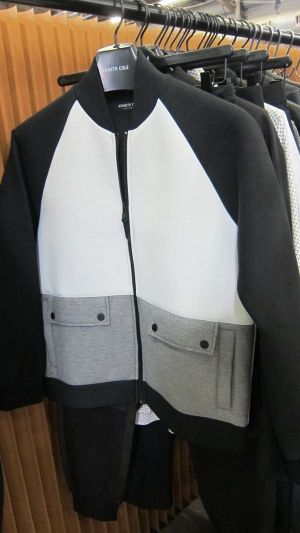 Kenneth Cole at Liberty
One of the best laid-out of the shows last week, Liberty returned to its home at Pier 94 and again offered a nice mix of more commercial and fashion-driven pieces. For the most part, brands there offered rather dressed up looks versus casual ones, including a new more upscale Black Label collection from longtime designer Kenneth Cole, which includes tech-driven and modern colorblocked jackets. Another New York based brand, 8.15 August Fifteenth, showed impressive jackets and various suiting pieces for modern urbanites. So did Descendant of Thieves, which has added fantastic suit separates to its offer. There were also several foreign brands showing including the German bag brand Aunts & Uncles and Clara Martin, an up-and-coming British designer whose colorful, streetwear-inspired looks (including a pair of quilted pink wide pants) refreshingly stood out from the pack. She and seven other brands from the UK made their Liberty debuts thanks to a cooperation sponsored by the UK Trade and Investment Partnership. Also new to the show was Anybrand, a just launched line of basic tees.

Other Liberty exhibitors who have upped their game for fall included By Robert James, who showed sophisticated suiting and Schott, which has created some amazing 1970s-inspired leathers for fall.
Keeping with the somewhat dressy nature of the show, denim looks were generally rare but were offered by brands such as Shockoe Atelier and Farah. 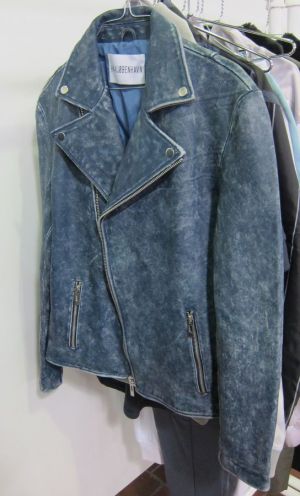 Han Kjobenhavn biker leather jacket at Capsule
Capsule Men’s move to a new home, Pier 92 (next door to Pier 94 where Liberty was held), was met with mixed reviews by exhibitors and visitors. While the location was certainly convenient and the mix of brands was impressive, the show floor often seemed cramped and messy and the bare tile floors were not very aesthetically pleasing. One exhibitor even pointed out that the booth numbers were out of order in his aisle and said that buyers had difficulty locating him. Despite these problems the show did have some treasures, including a new line of footwear called Clearweather and Selvadge, a denim line founded by Abdul Ahad Tumbi that packages its jeans in cardboard tubes and encourages people to mail back their old jeans for recycling. Directional European brands at the show included several from the UK, such as Maharishi, and Wood Wood from Denmark. Canadian denim brand Naked & Famous also returned and showed heavy “elephant” jeans and collection of whimsical printed shirts. And Han Kjobenhavn showed lots of retro-looking washed out denim along with sports-inspired looks.

MAN
The always intimate MAN show featured 46 brands this season and most said they were pleased with the event and traffic. Highlights of the show included the US debut of the French brand Bleu de Paname, which produces a lot of its clothing in its own factory in France. Likewise, footwear designer Jilleen Liao introduced her new line, Onto NYC, a collection of mostly clean, sleek-looking sneakers that retail in the $200 range.

Daniel Dugoff returned with his Ddugoff collection, which featured numerous bright green items for fall along with a stunning patchwork coat. And hip Brooklyn-based brand and store Kinfolk was also there and showed impressive workwear-inspired pieces along with a print shirt with Oscar and Grammy Awards graphics. Finally, up-and-coming menswear brand Matiere made its first ever appearance at MAN and, as usual, wowed with its unique and impressive selection of fine fabrics.