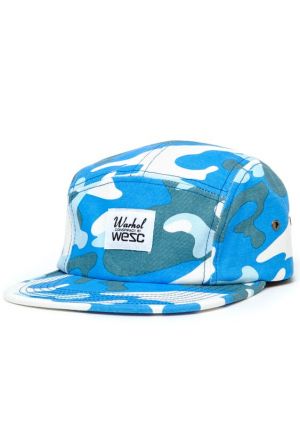 by Christopher Blomquist — October 09, 2014
It’s WeSC meets Warhol.
Swedish streetwear brand WeAreTheSuperlativeConspiracy will launch a new collaborative collection with the Andy Warhol Foundation for summer and fall 2015. Called Warhol Conspiracy by WeSC, the collection will include numerous products based on six of the late pop artist’s “Camouflage” series of paintings and prints. There will be two seasonal assortments each featuring three different camouflages on jackets, shirts, shorts, socks, hats, hoodies, bags, backpacks, headphones and limited edition skateboards. There will also be a small selection of T-shirts with Warhol quotes and self-portraits. 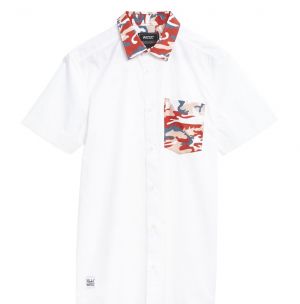 Warhol Conspiracy by WeSC shirt
The first items will drop in stores in March 2015 in the US, Canada and Asia and most of them will also be available in Europe and worldwide via WeSC stores and distributors.
“WeSC is proud to present this product line in collaboration with The Andy Warhol Foundation,” said WeSC’s chairman, Theodor Dalen, in a statement. “We have had many interesting artist and activist collaborations through the years but none of the collaborations have been as spot on for the brand for ‘Intellectual Slackers’ as Andy Warhol’s Camouflages. Warhol is one of the original Intellectual Slackers and besides being one of the most important artists of all times, perhaps the most important, he is as relevant to contemporary culture today, 27 years after his death, as when he started.”
A portion of the proceeds from the new collection will go to the Warhol Foundation’s endowment, which supports contemporary art.