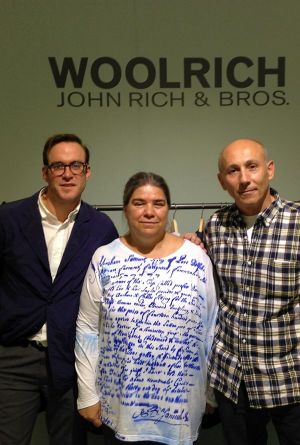 by Maria Cristina Pavarini — June 24, 2014
WP Lavori, the Italian company that holds the license to design, produce and distribute Woolrich in markets including Europe and Japan, has signed a long-term agreement with the US historical outdoor apparel and wool specialized brand.

“This agreement was meant to give the business longevity while starting a long-term relationship similar to a merging between the business of two families, the Rich family, still owning the brand since its foundation in 1830, and the Calori family that founded WP Lavori In Corso in 1982,” commented Andrea Cané, Creative Director, WP Lavori in Corso.

The agreement involved Cristina Calori, owner of WP Lavori In Corso, and Joshua W. Rich, Executive Vice President of Woolrich, and representative of the Rich family’s 8th generation, after a year and a half of pre-agreements. It will become effective from s/s 2015. Based on this agreement, WP Lavori in Corso will manage the European, Japanese and Korean markets. Woolrich will manage activities in the US and Northern America, while both partners will be involved in coordinating activities in China.

The two families have founded a committee that will be joined by both parts and will handle all strategies for product, distribution, retail, logistics, etc.”We are now thinking as if we are part of the same company,” commented Joshua W. Rich, “and will be acting now pursuing common goals. For instance, we want to re-launch our woolen fabric manufacturing in Pennsylvania, which is one of the few historical operating mills left in the US.”

At present, the Woolrich brand perception differs according to market areas. A common goal will be the strengthening of all aspects of the brand’s heritage, image and products globally. “At present the Woolrich name is most associated with its wool manufacturing heritage and blankets – especially in the US and in parts of Japan – and only in parts of the outdoor apparel segment,” explains Cané. Differently in Europe and Japan, Woolrich is mostly associated with its highly functional parkas and outdoor clothing. A common goal is to let both components of the brand’s identity be widespread and sold worldwide.

“Our Woolrich Pennsylvania mills hosts an archive of 3,000 unique patterns of wool fabrics and blankets. For this we will be implementing our fabric production and add to the existing fabrics mostly made with wool (85%) and nylon (15%), more fabrics made with 100% wool, but also more refined fabrics also made with cashmere and other noble fibers as well as fabrics to be employed for interior decors,” continues Rich.

Another goal will be spreading Pennrich more thoroughly in Europe. The younger-minded and more affordable brand costs about 30% less than Woolrich and has a great potential for growing in Europe, especially Germany, one of the major European markets for Woolrich.
The upper sportswear brand Woolrich Woolen Mills will be managed by Woolrich directly from the US with a major focus on the US market.

Also part of the overall project is to enlarge the Woorich retail network. Their first US store will open by end of August 2014 in New York, in Soho, at the corner between Wooster and Prince Street. Other openings will happen in Prague by end July; Hamburg will follow soon and Tokyo is due to open beginning of October. In addition, two more openings in Germany and at least one more in the US are planned.