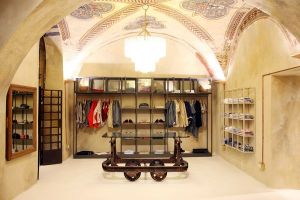 by Maria Cristina Pavarini — March 10, 2011
Italian company WP Lavori in Corso continues pursuing its retail opening strategy. The company is simultaneously working on developing the distribution of its portfolio of brands - be them licensed (Woolrich, Woolrich Woolen Mills), distributed in Italy (Pennrich, BD Baggies, Save Khaki, Barbour, Blundstone), or their own (Avoncelli). After having opened two new WP Stores in Riccione and Varese in Italy in 2010, a new store now followed in Florence.

The next concept stores will open in Rome in April, close to the central Piazza di Spagna, followed by stores in Pescara, Verona and Padua within September of 2011. In 2012, the company will open three more boutiques in Italy and their first US-based WP Store in New York.

WP also continues opening Woolrich flagship stores and corners. In 2010, they established shop-in-shops at Bon Marché in Paris, Selfridges and Shop at the BlueBird in London and NK in Stockholm, and will continue opening them Europe-wide from f/w 2011/12.

The new WP store in Florence with 250sqm is located inside a beautiful historical building on the prestigious Via della Vigna Nuova. The new location, designed by art director Luca Caccioni, on the one hand respects the origins of the location, while on the other hand it looks at the future evolution of retail identity through the materials used and the professionals involved in its construction.

Andrea Canè, Creative Director WP Lavori in Corso, commented: “The United States has always been a fertile growth environment for us. Now, Japan is another country that is offering us noteworthy creative stimuli.” For this reason, the group is strongly focused on its further international expansion.