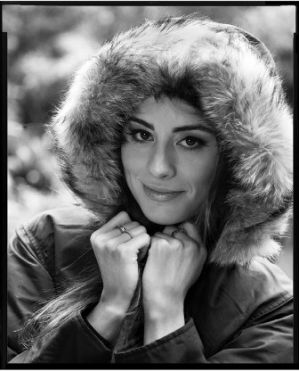 by Maria Cristina Pavarini — October 01, 2010
Woolrich celebrated its 180th anniversary with a special initiative within the events hosted during recently held Milan Fashion Week. A double series of 18 portraits shot by photographer Douglas Kirkland were presented inside the WP store in Milan's city centre.

For this very special anniversary, he photographed 18 creative and talented personalities including producer Benedict Coutler, actress Dominik Garcia (daughter of Andy Garcia), and actress Elle Fanning. All of them were photographed wearing the iconic Woolrich Arctic Parka. In order to emphasize the different dimensions of the classic outdoor brand, there's one series of a close-up black and white photograph and a series of an edgy digital portrait in full color.

Douglas Kirkland started his career at Look and Life Magazines in the '60s and '70s, a golden age for photo journalism. Among the celebrities he has photographed in the past are Marilyn Monroe, Elizabeth Taylor, Jack Nicholson, Angelina Jolie and Antonio Banderas. He also shot the backstage of movies like "Butch Cassidy", “Out of Africa", "Titanic", "Moulin Rouge" and "Australia".