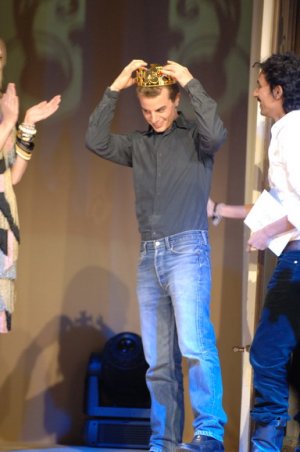 — December 08, 2005
For the sixth time the Swiss Textiles Award was given to a young designer. This year’s winner is Belgium designer Christian Wijnants (pictured), who was awarded the prize at a gala event in Lucerne, Switzerland on November 26.

The Swiss Textiles Award is Europe’s biggest fashion prize: it provides €100,000 in financial backing to a young, independent fashion designer each year during a critical period of his or her career. The sum is not paid out in cash but rather will be used to provide substantial assistance in the shape of material benefits (such as press relations, show production etc.) for the winner. Previous winners were designers Haider Ackermann in 2004 and Raf Simons in 2003.

On the evening of the awards, the six finalists unveiled their latest collections to the international panel of judges and national and international press. The equally prominent panel of judges decided the winner that very evening. Assessment criteria include creativity and innovativeness, marketability and the collection’s commercial potential. Among the 13-member jury were: Serge Carriera, buyer Galeries Lafayette/Paris, Margareta van den Bosch, head of design H&M/Stockholm, Alexander Slumsky, general producer Russian Fashion Week/Moscow and several international fashion editors.

During the gala event Swiss fashion magazine Annabelle awarded for the second time a fresh Swiss student-designer with an one year traineeship at German Wolfgang Joop’s Wunderkind atelier.

In the past, the bestowing of the Swiss Textile Award and annabelle Award were part of the Gwand Fashion Festival. However, since the Gwand Foundation has now been dissolved due to debt problems, the Fashion Festival has been cancelled. To not neglect the promotion of talented newcomers, but rather to consistently support their progress, the Swiss Textiles Association and annabelle have decided to launch their own fashion platform – independently of Gwand – and to award their prizes there.