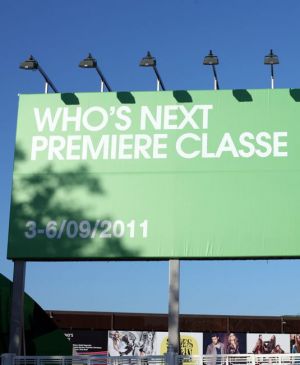 Who's Next Paris
Stories

WHO'S NEXT REORGANIZES TRADESHOW CONCEPT

by Maria Cristina Pavarini — October 27, 2011
Who's Next has announced a whole new reorganization strategy regarding its own events in order to increase its internationality both in terms of visitors and exhibitors. In addition, it aims at promoting a new urban and menswear-oriented fashion and accessory section – Mr. Brown – also supported by bringing their dates forward in 2012 between Pitti Uomo and Bread & Butter.

Aim of the reorganization is not only to present all of its shows on the same dates and at one location in Paris Porte de Versailles, but also to put a reconsidered focus on top-end quality brands.

For this, the overall organization, lay-out and exhibiting space will be divided into six different fashion segments and dedicated areas – such as womenswer (Fame and Private), menswear and urban style (Mr. Brown), fashion accessories (Première Classe), leather and footwear distributed through specialized retailers (Le Cube and Mess Around). The new asset will present a total of about 2,500 brands, of which 60% are international, on a space of 120,000sqm. Aim of the initiative is to increase the rate of visitors from abroad from currently 35% to about 50% within two years.

From beginning of 2012, all shows related to Who’s Next will be moved to earlier dates and take place from January 21-24, 2012, and between June 30 and July 3, 2012, in order to support buyers in making their orders in advance, providing anticipated information on womenswear – earlier than Première Vision and Paris Fashion Week, two French main attractions for international buyers happening later during the year (Sep./Oct. and February). For the second half of the year, there are two editions of Première Classe, The Box and L’Atelier (gathering about 420 brands), taking place between March 2-5, 2012 and Sep. 28-Oct. 10, 2012. The only exception will be the show Mode City dedicated to beachwear that will also take place within all the other shows from 2013 onwards.

Last May, WSN Developpement, the organization behind Who's Next, Première Classe, Prêt-à-Porter and Mess Around, had acquired the operative direction of the shows organized by Sodes (Prêt-à-Porter, The Box, Atmosphere, Living Room and The Train trade shows) and bought 50% of the Mess Around fair.