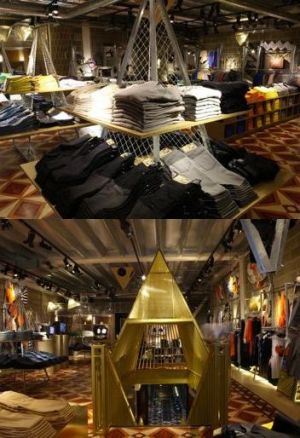 by Anastasia Dyakovskaya — October 11, 2012
Leading trend and style forecaster WGSN recently announced its Global Fashion Awards nominations with Swedish label Cheap Monday’s London shop up for “Best New Store/Refit.” The competition aims to honor fashion’s most inspirational and innovative individuals and businesses and will announce winners at its award ceremony on November 5. The Best New Store category recognizes the best new standalone store that has an "environment that pushes boundaries in terms of design and customer interaction, but which also stays true to and reinforces the essence of the brand."

Cheap Monday’s Soho store, which was designed together with architecture agency Uglycute, opened on Carnaby Street in February 2012 and is the brand’s first standalone UK store. It takes up 330 sqm across two floors and carries the label’s entire range displayed along raw, basic materials such as plywood and chain metal fencing.

Håkan Ström, COO of Cheap Monday, said: "Our Cheap Monday Store in London has existed for just over half a year and has received a lot of attention during this short time. The WGSN Global Fashion Awards nomination is a recognition from the industry, which we are proud and thrilled about. It is an additional acknowledgement that our store concept works well, and encourages us in future store openings.”

Next to Cheap Monday in London, Alter in Shanghai, C. Wonder in New York, Puma in Amsterdam and Burberry in London are on the shortlist for WGSN's Best New Store/Refit category.