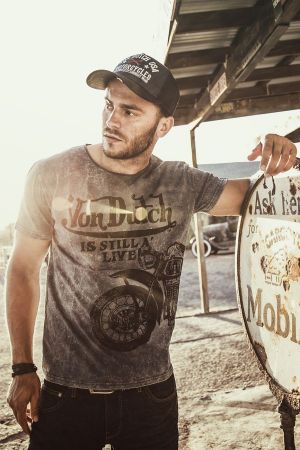 by Elena Reudenbach — October 23, 2014
Men’s ready-to-wear-brand Von Dutch announced that the Newtex company signed a European license for the brand covering France, Germany, Austria, Benelux, Switzerland, Spain, Portugal and the principalities of Monaco, Liechtenstein, Scandinavia, Greece, Czech Republic and Andorra. AZM will handle distribution for most of the countries.

In late 2009, Group Royer, a French footwear wholesaler and holder of the worldwide license for Von Dutch Footwear, acquired all rights to the Von Dutch and Flying Eyeball brands for all product categories in all countries. In January 2010, Royer tasked Olivier Mercier (now CEO of Royer Brands International S.A.R.L and Von Dutch LLC) with relaunching the brand internationally through licensing.

“We decided to first conduct a relaunch in Asia – where Von Dutch still had a reasonable presence – and let a few years go by so that we’d be in a stronger position to return to Europe, with the support of a quality licensee – Newtex,“ states Olivier Mercier, CEO Von Dutch LLC.

In Asia, Von Dutch currently runs about 30 own stores and 100 in-store concessions. Now Newtex shall help to re-establish the brand in Europe.

The new summer ‘15 collection “Von Dutch is still alive” shows the brands design roots and goes back to the original style then created by founder Kenneth Howard.  The collection will consist of caps, T-shirts, jeans, jackets and further items. For the relaunch, the brand also launched the new online store www.vondutch.fr .