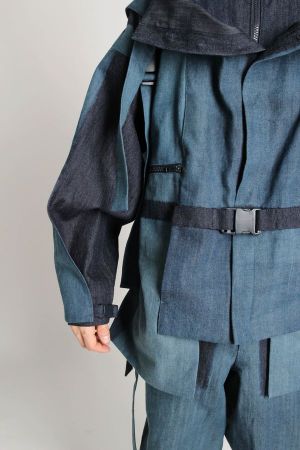 Anna-Luiese Sinning, designer at the Berlin University of the Arts sponsored by Vicunha
Stories

by Lorenzo Molina — April 12, 2016
With a clear focus on talent and creativity of the next young designer generation, Brazilian denim manufacturer Vicunha has sponsored a design project called ‘Jeans Otaku’ among students of the Universität der Künste Berlin (Berlin University of the Arts). Traditional Japanese clothing culture was the starting point of the project, which has led to out-of-the-box silhouettes and interesting layering looks.

Among the most interesting approaches were Anna-Luiese Sinning, whose idea was based on a traditional kimono revamped with utilitarian clothing influences in form of buckle straps and an incorporated backpack. Noteworthy is also the work of Daniel Jurhardt: a garment inspired by 17th-century firemen that features an all-over design using distorted skulls and crossbones while the fabric on the sleeves was burnt using flammable glue, giving the design an extra intensity.

Vicunha sponsored the denim fabrics that are the basis for the creative work of the 17 participating fashion design students. “The experimental work by the young creatives inspires the development of new ideas and approaches. An aspect you shouldn’t ignore if you wish to keep your fashion business up-to-date and relevant,” expressed Thomas Dislich, Europe and Asia director of Vicunha.