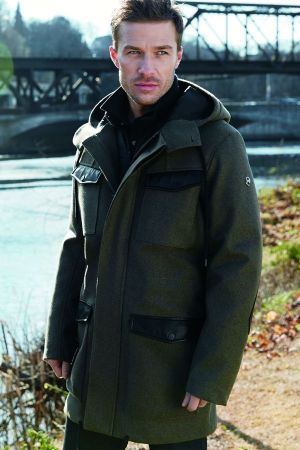 by Elena Reudenbach — January 07, 2015
As part of Victorinox's fall/winter 2015 collection, the brand's artistic director Christopher Raeburn has developed four limited edition jackets. The four models, all done by hand in small studios in Europe, are made of Italian felt wool and processed, as well as fitted with a leather trim by fabric specialist Schoeller in Switzerland.

The Victorinox Wilhelm Blouson is a modern interpretation of the classic military bomber jacket, while the Oberland Blazer is a modern variation of a traditional officer’s jacket with leather pocket flaps. The Sonder Peacoat is also a modern interpretation of the classic peacoat, made from wool. The fourth model from the limited edition is the Gallen Parka that found inspiration in Swiss military parkas. All limited edition models will be exclusively available at the Victorinox flagship stores, as well as at selected specialized retailers.


As another novelty for fall/winter 2015, Victorinox is also introducing its new Modular Liner System, offering additional layers to button into your jacket. The Matterhorn Vest can be integrated into nine different pieces of outerwear and the longsleeved Torrenthorn Line can either be worn solo or combined with any piece of the Modular System.