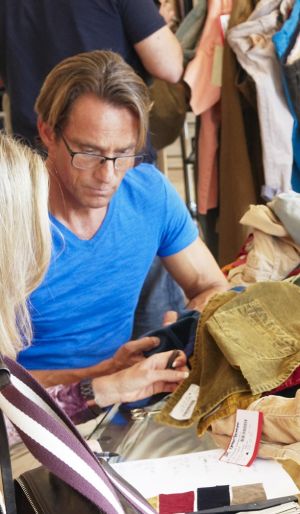 VIEW in Munich succeeds with initial Tendencies in fabric trends

by Regina Henkel — January 08, 2013
The VIEW tradeshow in Munich, the Kick-off event for the fabric sector reports more exhibitors and more visitors to Munich. Even heavy snowfall did not prevent the designers and product managers for such renowned brands as Hugo Boss, MAC, Escada, Marc Cain, Windsor, Marc O’Polo and Brax from attending the Preview trade fair VIEW in Munich before christmas (11 and 12 December 2012). Exhibited in the exclusive setting of Prisco Haus on Prinzregentenplatz were some 160 high-end fabric and findings collection for the 2014 Spring/Summer season – more than at the previous event.

The rooms on the ground floor of the left wing – Which were occupied for the first time for the show – housed first-time exhibitors such as the Italian fabric expert Weft, and the Isabella Rossi agency with fabric lines from Bonotto, to jersey specialist Fantasie Tricot. Also denim specialists like Royo were among the exhibitors, showing new soft and stretchy denims with new dying techniques in pastel and other colours. The positive response by both exhibitors and visitors alike confirms the decision of organisers at Munich Fabric Start to stick to these early in the year dates to kick-off the season. “The early dates are very important for key customers and renowned German ready-to-wear manufacturers like Boss, Escada and Rena Lange,” says Michael Hellbeck of Union Knopf, testifying to the relevance of View.

For many of those attending VIEW, focused talks had already taken shape, and tendencies were also clearly emerging, as pointed out by Philea: “What customers instantaneously rate as positive at this early point in time will remain. View is a very good indicator for the season” said Nicole Marchal. Even from abroad many a creative mind capitalised on these early dates, “We simply want to be an early mover and be inspired,” said Angeline Catteeuw of Belgian label Xandres attending View in Munich for the first time. She came in search of fabric innovations for womenswear. In this segment, already at this early stage, it became crystal clear that colour and prints continue to be a key theme.

“There’s no avoiding prints – be it photo prints, semi-graphic prints, florals – there are ideas galore to keep this theme alive and kicking,” added Frank Engler, whose agency focused on presenting Malhia Kent and Lanificio Piemontese collections. First-time exhibitor Isabella Rossi shares her view: “We still believe in prints and in colour. Admittedly, in a slightly more subdued tone with more pastel shades – but colour will definitely be staying around. Even shine is still in demand. All in all, things will become cleaner and more chic but always with a sporty slant.” Like many others Rossi will present the entire cross section and diversity of her collections in the New Year – at Munich Fabric Start from 5 to 7 February in Munich.