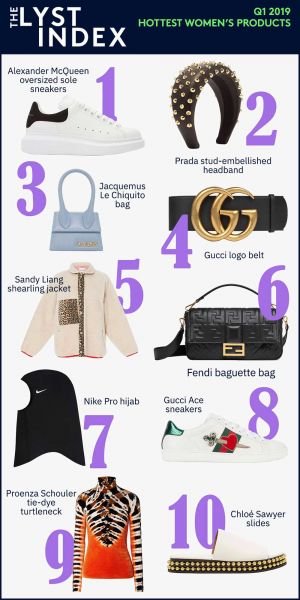 Photo: Lyst (www.lyst.de)
Lyst index of the most popular women's products in the first quarter of 2019.
Trends

Off-White, Gucci and Balenciaga are most sought-after brands

The global fashion search engine Lyst  (www.lyst.de) has identified the world's most desirable men's and women's fashion brands and products for the first quarter of 2019.

According to the Lyst fashion ranking Off-White, Gucci and Balenciaga are the most sought-after brands (for further brand placements it is worth taking a look at the index below). 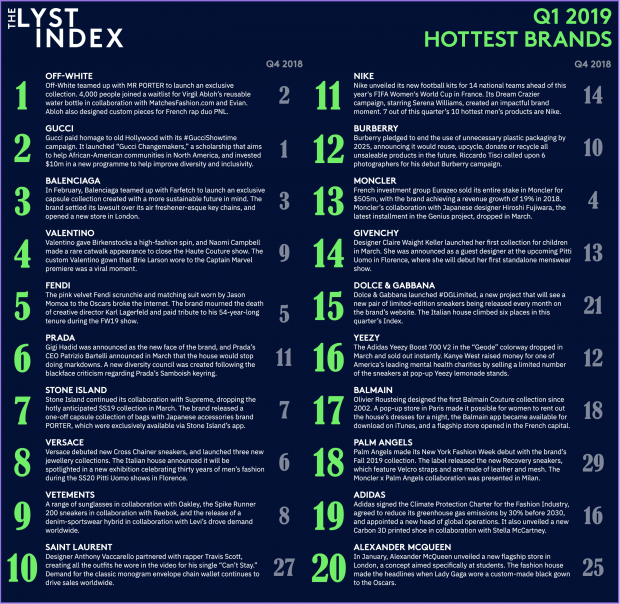 Photo: Lyst (www.lyst.de)
Ranking of the 20 most popular fashion brands in the first quarter of 2019.

Controversies are good for online business

Lyst points out that five of the 20 most popular brands were in the public spotlight this quarter and also experienced turbulent times and negative reviews in social media. However, brands involved in controversies experienced increases in global searches and sales. This suggests that intense brand criticism had no immediate impact on luxury shopper decisions.

At the end of the last quarter, Dolce & Gabbana had to cancel a fashion show in Shanghai after controversial videos and offensive private Instagram messages, allegedly sent by co-founder Stefano Gabbana, went viral on social media. The Italian designer has denied writing the messages. Nevertheless, the brand has risen six ranks in the index as searches have increased by 29%.

To find the world's most popular products, the Lyst formula filters six million articles that are mentioned in social media. It also measures search queries, page visits and sales across thousands of online stores, divides items into different colors and models and compares global demand with available inventory.

The result: Both the list of the most popular women's articles and that of the men is led by sneakers. Especially the plateau sneaker (also known as the oversized sneaker) by Alexander McQueen enjoyed strong demand. As stated by Lyst female customers are currently searching for this shoe model every two minutes in Lyst's search engine. It was one of the most sought-after fashion items among women worldwide this quarter.

The sneaker clearly dominates among men. A total of seven of the ten most popular sneakers of the first quarter of 2019 come from Nike. First place went to the React Element 87 sneaker, followed by the Boost 700 v2 sneaker from the collaboration between Adidas and Yeezy (second place) and the bestseller Nike Air Force 1. 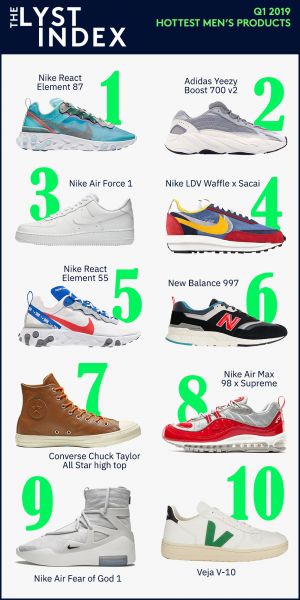 Photo: Lyst (www.lyst.de)
Lyst index of the most popular men's products in the first quarter of 2019.

Prada's studded hairband is the current bestseller among women. According to Lyst in just two months, it has generated 300% more search queries, making it the second most popular women's item in the first quarter of 2019. Just as much in demand is Jacquemus' mini Le Chiquito bag. Le Chiquito bag increased mentions of the brand in the social media by 1831% and triggered thousands of search queries at Lyst. In just a few weeks, various color options were sold out at online stores.

Photo: Lyst (www.lyst.de)
Lyst index of the most popular women's products in the first quarter of 2019.

Another product worth mentioning is the Sport-Hijab, which made it to seventh th place in the Lyst ranking among the most popular fashion items worldwide this quarter. Before the headscarf was launched in December 2017, Nike has worked with a number of Muslim athletes over the years on the Pro-Hijab. Among the athletes were fencer Ibtihaj Muhammad, figure skater Zahra Lari and weightlifter Amna Al Haddad, who provided the brand with feedback on the prototypes. Searches for the Hijab have risen steadily since its inception. Lyst's demand increased by a further 125% this quarter after French retailer Decathlon abandoned its plan to sell a sports hijab after receiving threats and a flood of complaints. This development helped Nike get 4900% more mentions in social media.

The basis of the ranking

To identify the quarter's most relevant products, Lyst has analyzed more than 100 million fashion searches from more than 80 million users worldwide. In addition to the number of Lyst and Google searches, the online search engine also looks at the number of page visits, sales and social media mentions of more than six million products.