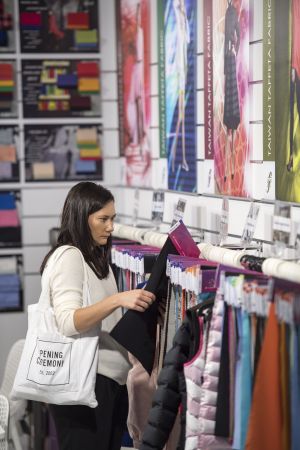 The 40th edition of Texworld Paris will take place from 6 February until 9 February, 2017 in Le Bourget, Paris.

The show will present 730 exhibitors, all weavers chosen by an expert committee, judged on the quality and research of their products.

For this edition, the show has noticed an increase in exhibitors that previously participated in the show and now are returning after skipping several of the recent editions. Among them, for instance, there are weavers from Egypt, a country specialized in cotton fabric production.

“Texworld Paris is for many a special marketplace that simply cannot be missed by the fashion sector”, commented Michael Scherpe, president, Messe Frankfurt France.

The show’s exhibitors most represented country is China, followed by Turkey (87 exhibitors) and Korea with 71 exhibitors. India participates with 53 exhibitors, while Taiwan joined with 26 and Pakistan with 19 companies.

Among newcomers there is the French company of Domotex, a specialist in prints. The ranges for shirting, jacquard, fake fur and synthetic leather will be highly diverse for the f/w 2017/2018 season.

Elite, the segment dedicated to customized solutions, will present its second show edition hosting 21 exhibitors. The majority will be presenting specialist offers adapted for European markets.

The show will also host the third edition of Frankfurtstyleaward, an international fashion competition that has been promoting young designers since 2007.

A series of lectures about the latest developments in the sector, news from exhibitors, catwalk shows and the Trends Forum area will be offering a varied and imaginative program, fueling visitors with new ideas and inspiration for their work.

During the same dates and location, other shows will also take place – Apparel Sourcing Paris, Avantex Paris, all organized by Messe Frankfurt.

Apparel Sourcing, now at its 12th edition, offers a variety of solutions for clothing and accessories production. It will host more than 300 exhibitors (30% more than in 2016) from China, Bangladesh, Pakistan, India, but also Myanmar and Guatemala.

Avantex presents a selection of innovative textiles and materials. An area will host start-ups such as Coloreel, presenting an instant dyeing machine for embroidery and Euveka, robotic mannequins to be employed for pattern making. Also noteworthy is the presence of Green Defence, a group of Taiwanese chemists, and Austrian Wolford, expert in biodegradable design production.

Messe Frankfurt is one of the world’s leading trade fair organizers. In 2016, it organized a total of 133 trade fairs, of which more than half took place outside of Germany. It generates around €648 million in sales and employs 2,244 people. The group has a global network of 30 subsidiaries and 55 international sales partners, allowing it to serve its customers on location in 175 countries.