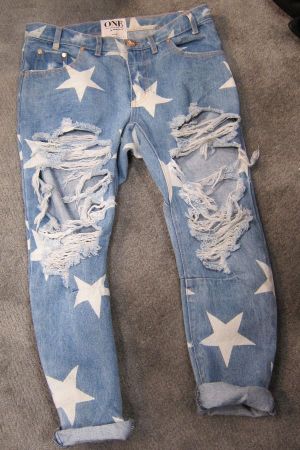 Boyfriend jeans by One Teaspoon, spotted at Coterie
Stories

Coterie
With a huge roster of more than 1,400 exhibitors on three levels, the behemoth Coterie show returned to its home at the Javits Center from Monday to Wednesday. Most exhibitors said that visitor turnout was slightly lower than previous seasons–this was perhaps due to the frigid weather–but they deemed it a success nonetheless.

Covering everything from eveningwear to activewear, Coterie put special emphasis on denim this season by launching Blue, an exhibition sponsored by denim manufacturer Isko of key items from 25 jeanswear brands. Participating labels in Blue included Current/Elliott, Genetic, Hudson, 7 for All Mankind, Paige, AG and others. The display in the main lobby offered a terrific one-stop look at innovative styles for the season ahead.

Trendwise, the 1970s came roaring back with flared jeans at Paige, Genetic, Joe’s, Hudson and Seafarer, an Italian brand that showed in the TMRW section for new and cutting-edge brands. Distressing was also a huge trend and jeans with edges that are so raggedy that they almost look like fringe were seen at 3x1 and the innovative Australian line One Teaspoon. Elsewhere, it was all about using hardware and other embellishments. Designs with decorative grommets were important at Seafarer and Hudson (which also stressed the supersoft fabric in its Elysian models) while Paige’s offerings included a pair decorated with faux pearls and another with a pair of painted white horizontal stripes at the ankle.

Capsule/Axis
Capsule Women’s emerged in a new home, Pier 94 on the Hudson River, and the new space served it very well. Running Sunday to Tuesday, the show was divided into a Ready to Wear section and a large one devoted to Accessories with brands such as Loopy Mango and A Peace Treaty. While foot traffic was slightly slow on the final day, exhibitors said that Capsule had been especially busy on Sunday when it held a morning discussion called “The Independent Mindset” featuring boutique owners Steven Alan, Jill Wenger (Totokaelo in Seattle) and Jennifer Mankins (Bird in Brooklyn) and moderated by Fashionista editor Lauren Sherman.

Once again devoted mostly to up-and-coming brands and designers, Capsule did surprise this season by having Levi’s as an exhibitor. It showed its Made & Crafted and Vintage collections. Jumpsuits, whether in denim or other fabrics, were hot items at Capsule and were offered by brands such as Shades of Grey by Micah Cohen and Artisan De Luxe, a first-time exhibitor with a vintage, pseudo-Japanese streetwear aesthetic despite that fact that it is American. Another new exhibitor was Japanese brand Ikumi, fresh off its first New York Fashion Week show last week. Its graphic black-and-white offerings were impressive as were its fur shoes. Other standouts were Australian brand RES Denim, which showed mostly distressed items, independent designer Daniella Kallmeyer, who made a denim jacket and matching pants for fall along with supersoft draped jersey tops, LA-based designer William Bradley and Anyi, a brand manufactured by Peruvian artisans. It showed fantastic, on-trend chunky knits.

Running parallel to Capsule on the same floor was Axis, a brand new show from Reed Fashion Group and directed by Vanessa Chiu. Conceived to be a multidimensional reflection of how young contemporary women shop today, this new show's first edition's exhibitors included Reebok, RVCA, Obey Women’s and Crap Eyewear, among others. Reed Fashion Group's Aaron Levant said that he was pleased with the reception to the new event.

Our favorite looks at D&A this season included Courtshop’s denim dress and overalls both of which featured large grommets. Its oversized sleeveless black denim jacket with diagonal cropped sides was also killer cool. First-time exhibitor Dept. of Culture, which is not-for-profit company based in Austin, also wowed with its hand-embroidered superfine cashmere sweaters that contain graphics created by various international artists. Limited to runs of 100 to 150, the sweaters, which wholesale for $300 to $420, help fund community-based art installations explained brand founder Lisa Jennings.

The next edition of D&A will take place in Los Angeles March 16-18.

Woman
With 45 brands, Woman returned to its home at Industria in Greenwich Village. Show co-founder Antoine Floch said that while traffic was somewhat slow this season that the buyers from the best stores did attend and write orders onsite from Sunday to Tuesday. “Many brands said that they were pleasantly surprised that they were actually writing,” he said.

Once again featuring numerous European brands such as Ecoalf and hatmaker Larose Paris, Woman this season was also the launch pad for new US brand AD Collection. Created by Lindsay Smith Dixon, formerly of Atlas Showroom in Los Angeles, the line is meant to evoke a simple yet dressy 1990s chic á la Donna Karan in her heyday. The pieces are also customizable and can be ordered with or without sleeves, for example.