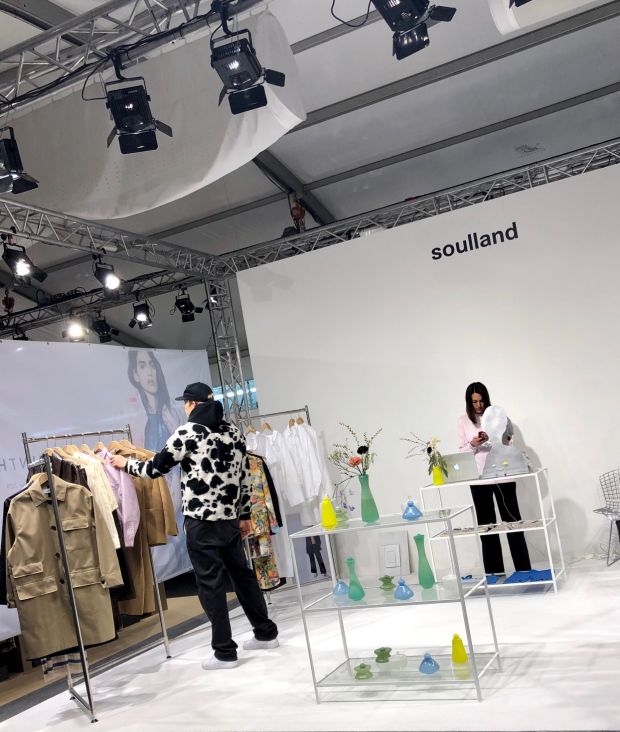 What you missed at Revolver edition FW20

Copenhagen’s Revolver tradeshow (29-31 Jan.) drew to a close on Friday afternoon, along with the rest of Copenhagen Fashion Week – an event that keeps gaining traction among international buyers and press. Following the winding down of Stockholm Fashion Week, the gravitational pull of the Danish capital is stronger than ever with an increasing number of Swedish brands joining the show schedule –Rodebjer and Stand Studio counting among the most buzzed-about names.

The Revolver Runway cluster of designers included names such as Soulland, Wood Wood, Tonsure and Henrik Vibskov, who, as always, put on what is best described as a piece of performance art. This time, the experience and accompanying collection centered on the bathroom ritual, involving a lineup of candy-pink bathtub sculptures with matching (human) bathers. Other standout efforts by Copenhagen’s designers were that of entrepreneurial brand Carcel,  which employs women in prison to craft pieces from materials local to these facilities, namely Peruvian baby alpaca and silk from Thailand. Taking a stand again mass-consumption, Carcel opened CPHFW with an empty catwalk, inviting the audience onto the catwalk to help “change the walk”. 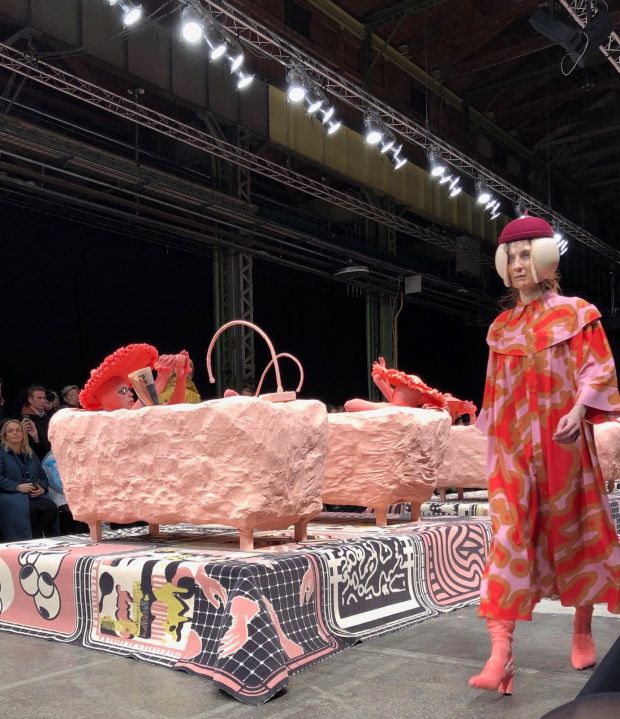 Photo: SI Team
Henrik Vibskov's catwalk show
Over at Revolver tradeshow – located in central Copenhagen’s Halmtorvet square – the first day had a steady but somewhat uneven footfall, while the second day was positively buzzing (many a tradeshow organiser’s favourite word, though it’s rarely a true reflection), and so too the final day. New for the FW20 edition, the show landscape was graced with a freshly conceived menswear section. Showcased in open, industrial-style booths with classic blue brand-signs (Pantone’s color of the year), the brand-mix consisted of both established and emerging contenders – Champion, Magnafied, A new Black, Komodo, Bobby Rocky and Revolution among them. 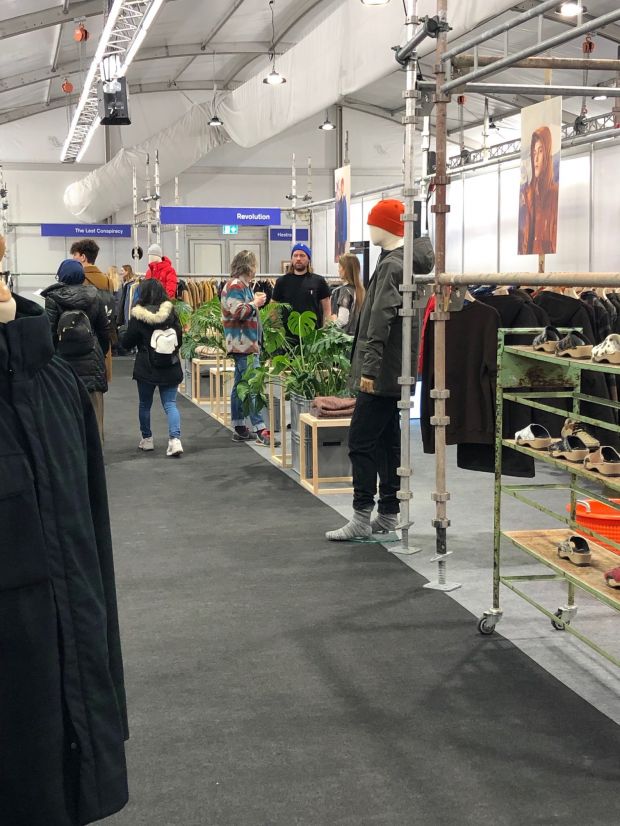 Photo: SI Team
Revolver tradeshow landscape
Revolver focuses on Scandinavian brands, with a sprinkling of names from further afield. Ethical UK brand People Tree has exhibited at the show for a few seasons and its head of wholesale Anna Birse had this to say about this season’s outing: “We don’t have a Scandinavian agent so we come here to do our selling for this market, and we’ve also met key buyers from The Netherlands and Germany. Copenhagen Fashion Week feels increasingly relevant internationally, and though we meet a lot of our UK buyers in our London showroom, I feel that they definitely like seeing People Tree in an international tradeshow setting like this as well.”

Red Wing’ booth Said Rik van Dijk, cult footwear brand Red Wing’s European marketing manager: “We work “It’s great to be in a tradeshow setting, and we have set up about 42 appointments over these three days, in addition to the people we’ll meet spontaneously. Revolver’s a really good place to check out what’s happening on the streetwear scene, in which Scandinavian brands play an important part.”

Survival of the Fashionest
Joost Jansen, the Dutch designer behind Survival of the Fashionest, wants to keep the craft of knitting alive, thus employing 250 ladies in Bulgaria to make his otherworldly and vividly hued jumpers, dresses and accessories – all of which are richly textured and abstractly patterned. The brand is now in its fifth season and counts Dover Street Market to its roster of stockists. 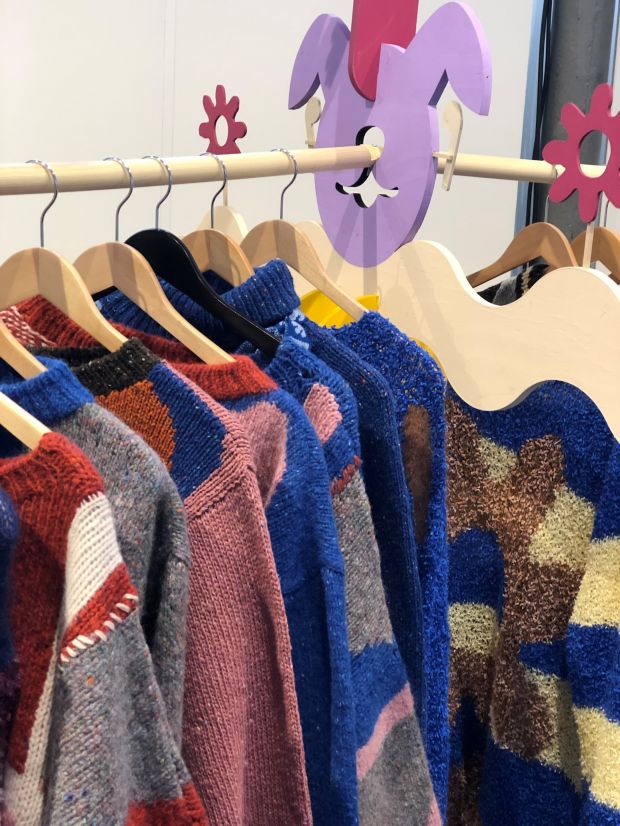 Photo: SI Team
Survival of the Fashionest
(Di)vision
Freshly launched Copenhagen-based brand (Di)vision exclusively uses deadstock fabric and second hand denim (as in the pieces that have been rejected by sorting facilities and saved from landfill) to create unique pieces such as denim jackets lined with old tees, and the pictured jeans featuring a denim front and back sections crafted from checked cotton poplin fabric. 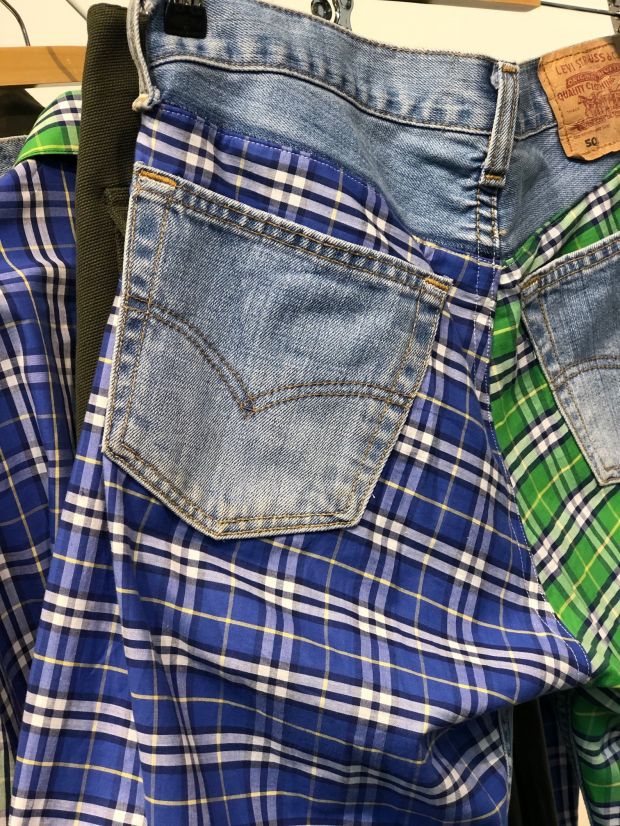 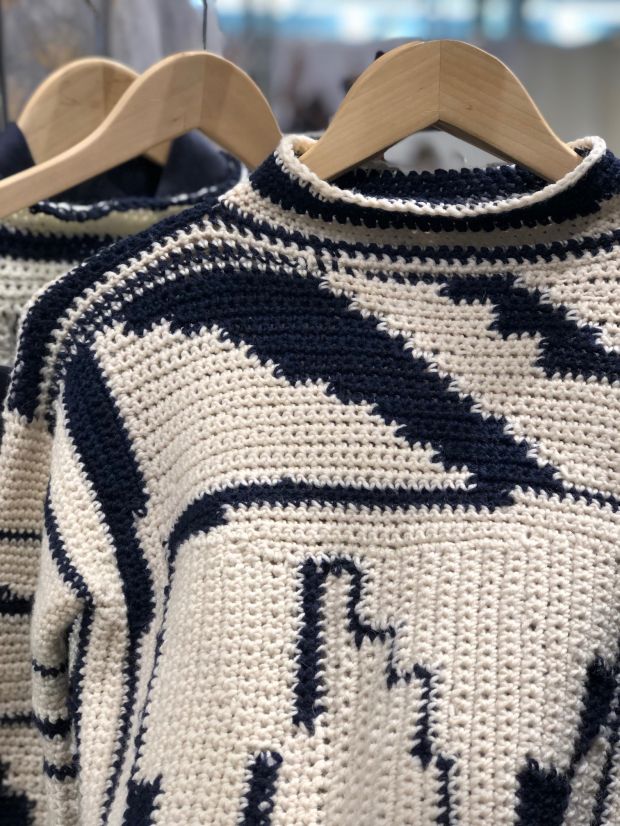 Photo: SI Team
Soulland
Tonsure
Showcasing a cluster of jeans in different washes inspired either by morning, noon or night – or all in the same pair as in the pictured style that starts off light up top and getting gradually darker towards the hem. All Tonsure’s jeans are made from 50% organic cotton and 50% recycled denim and for FW20, the tow first available are regular straight and a subtly drop-crotch fit with ease across the hip. 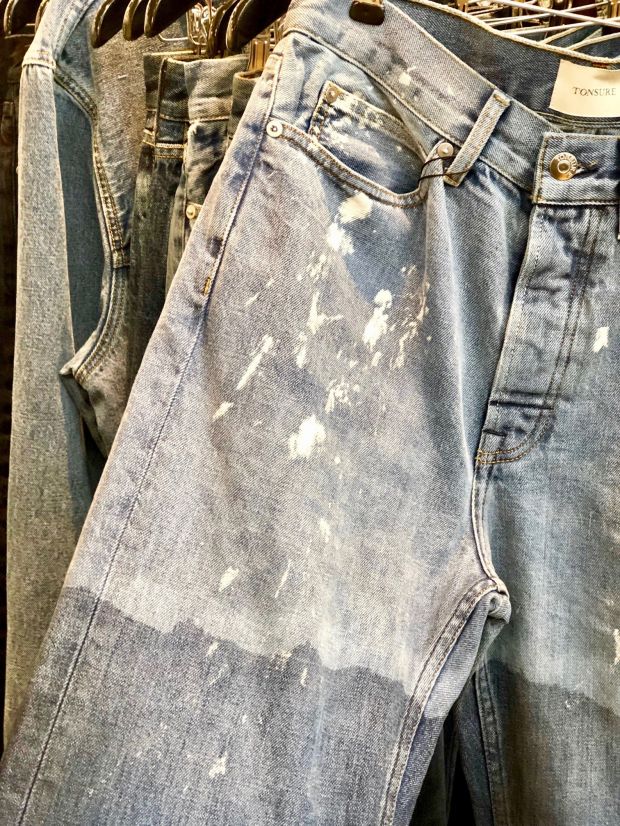 Photo: SI Team
Tonsure
People Tree
London-based ethical brand People Tree introduced a denim line a year ago, exclusively crafted from GOTS-certified denim. The range is fashion-led rather than a five-pocket affair. The cluster presented at Revolver included a wide-leg jeans and the pictured jumpsuit. 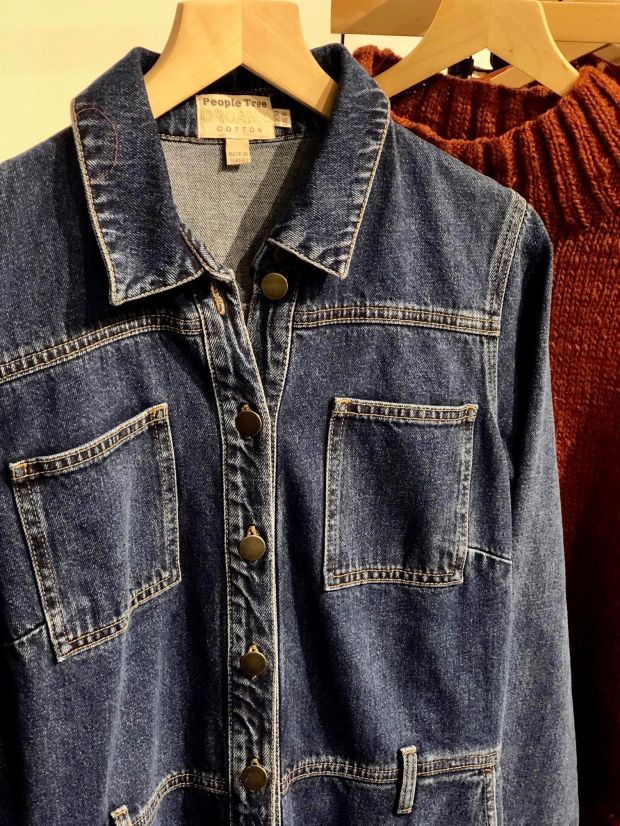 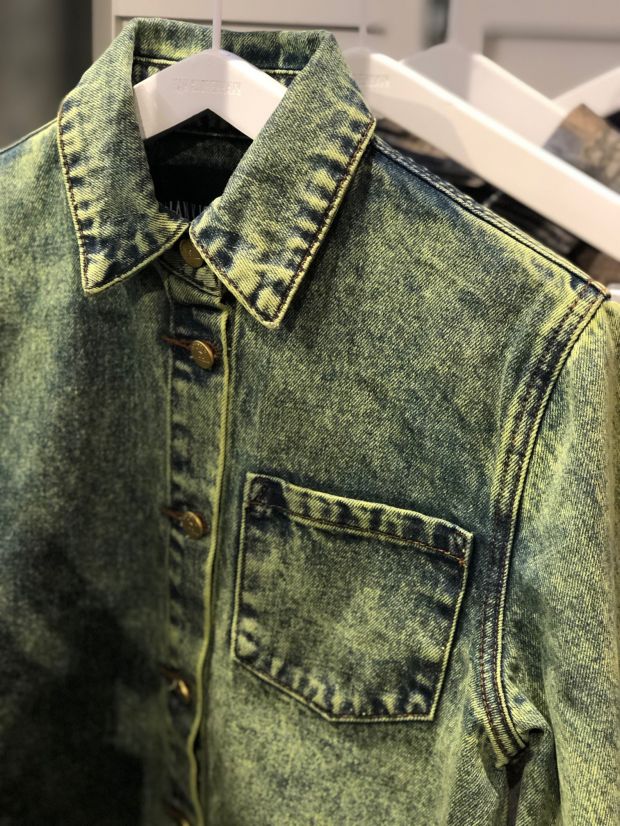 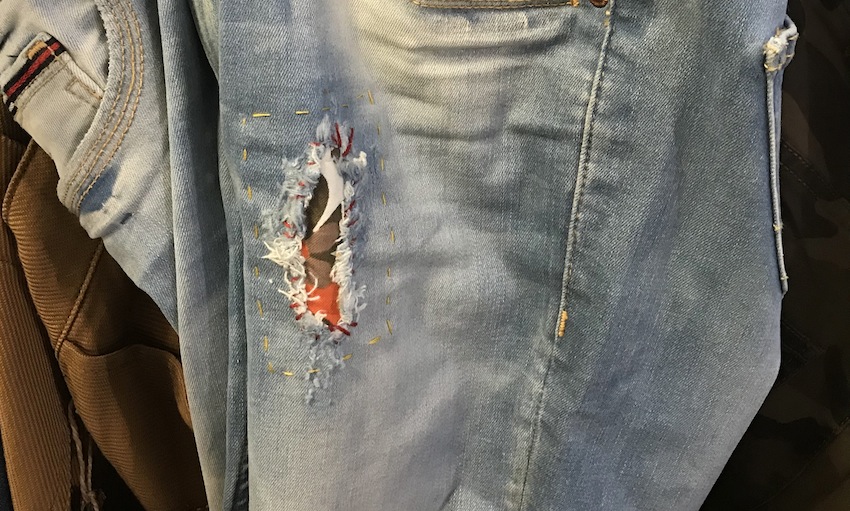 ‘Hands on’ at London’s Fashion SVP 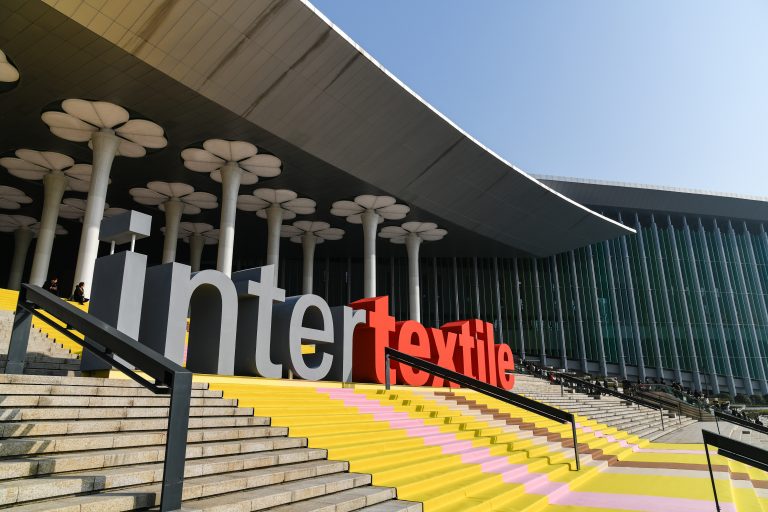 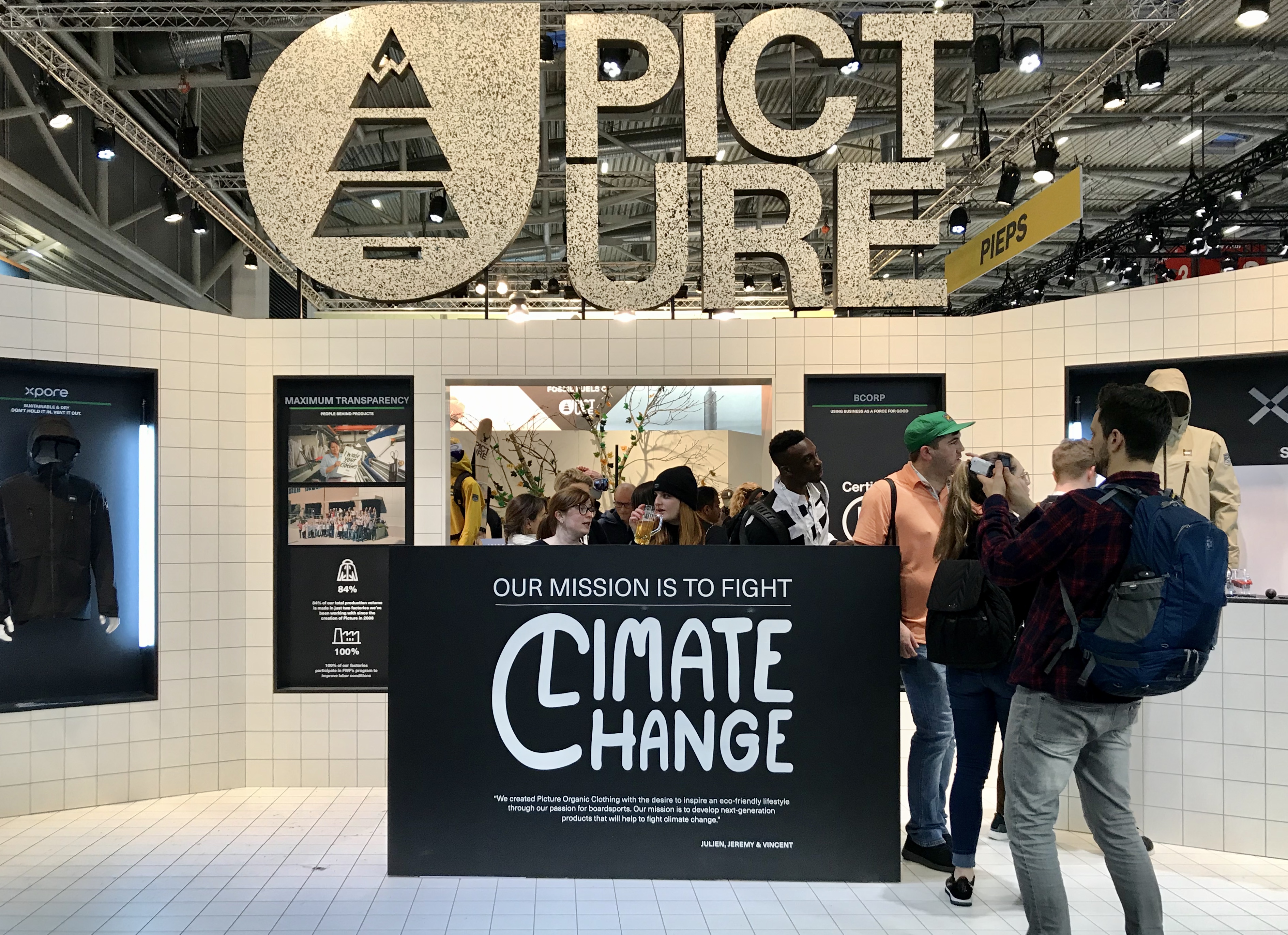