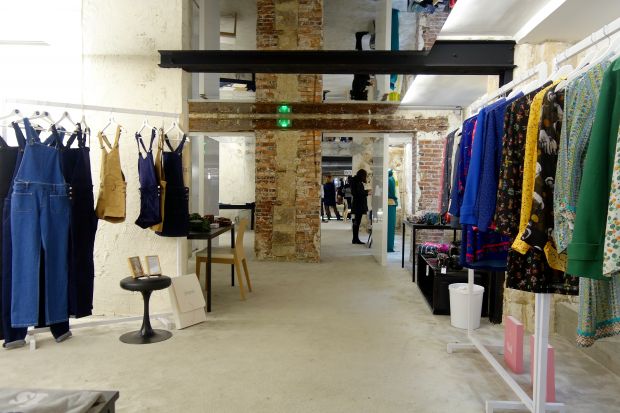 by Barbara Markert — March 10, 2017
Paris Fashion Week (PFW) attracts mostly the biggest numbers on journalists and buyers compared to all the other fashion show dates. Accordingly, there is a large number of trade fairs, which are expanded every year by new arrivals. In addition to the local, long established offers like Premiere Classe, Tranoi, Designers Apartement, Paris sur Mode Tuileries, Capsule and the Paris branch of Man/Woman tradeshow there are the country-specific showrooms, such as the Berliner Salon, Americans in Paris, Fashion Forward Dubai, FFF Hong Kong or London Show Rooms. Two new fashion fair entries this season voted for a combination of trade fair and pop-up store for consumers: Shy Projects, initiated and curated by Stella Berkofsky, shows fashion from the US, Europe and Japan, art and design objects for the interior. 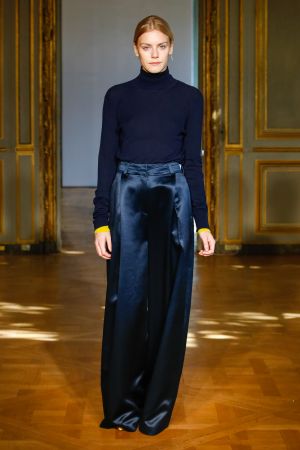 The showroom-boutique, close to the high frequented Place de République, kept opened even after the end of the fashion week and will close in early April. The second new offer named Heroes-Heroes was launched by Gerald Cohen, initator of the start-up competition Babybrand. This space of 300 square meters closed on the 6th of March and showed above all French brands. The 25 selected brands, each no more than seven years old, benefited from an ideal location between the Louvre and the Opera, close to famous concept-store Colette and the other trade fairs that had all been grouped around Place Vendôme for the first time this year. New was also a special shuttle service, which operated between the fairs in the city-center and their branches in the Marais district. 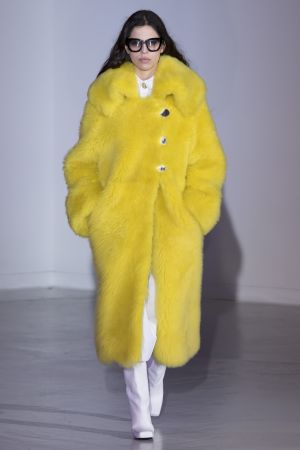 Despite the new concentrated locations of the trade shows, the rush to the fairs was limited. Due to the ongoing crisis in fashion, trade and the media, the shortened fashionshow calendar (from nine to eight days) and extremely bad weather conditions with continuous rainfall, fewer visitors were on the road. Nevertheless, the mood was good. In particular, the exhibitors at the three major trade fairs had previously agreed meetings and show-ups with their regular customers.

The Belgian knitter „I love Mr Mittens“ had already exhibited at Man/Woman in New York and wanted to pursue his engagement in Paris to find new costumers from the European and Asian market Also new exhibitors like the brand „Department Five“ from Italy, which is represented for the first time on Man/Woman, came to the show with positive expectations. Founder Nicola Silvagni: "We are just starting to build up an export. Therefore, it is important for us to participate in an international fair like this.“

See the most important trends of the fairs here: 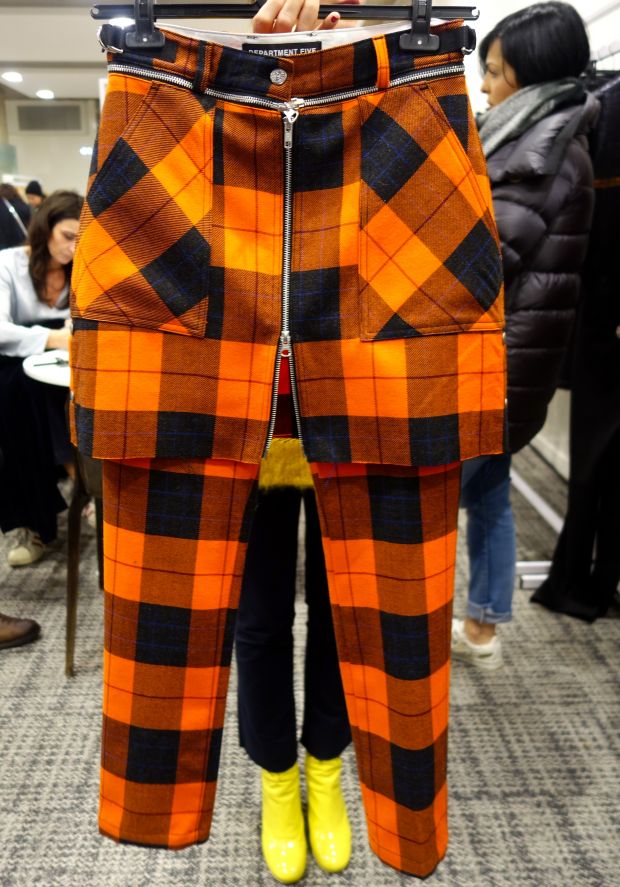 The pattern trend goes into its next winter. Checks, used until now quite discreetly for coats, are now more colorful and also more conspicuous. The Label „Department Five“ (mother company Catria Confezioni) from Ancona, Italy, converts the pattern in different shades and also shows combinations of mini skirts and pants in strong contrasts of orange with black. Also „Hope Stockholm“ continues to set on checks in coats. The young Parisian label „Victoria/Tomas“ of Victoria Feldman and Tomas Berzins, finalist at the Hyères Festival in 2013, shows plaid dresses in a gingham style. The Italian label „Maison Jejia“ relies on glencheck for women's jackets in a masculine cuts. 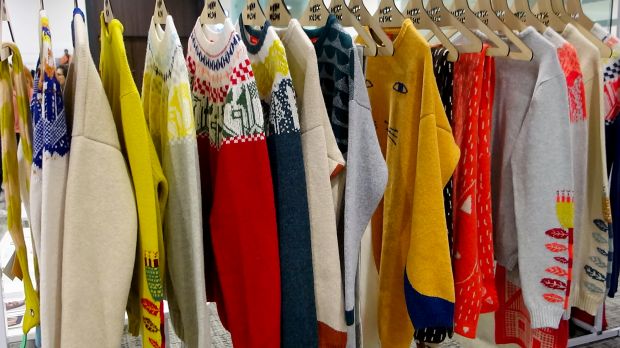 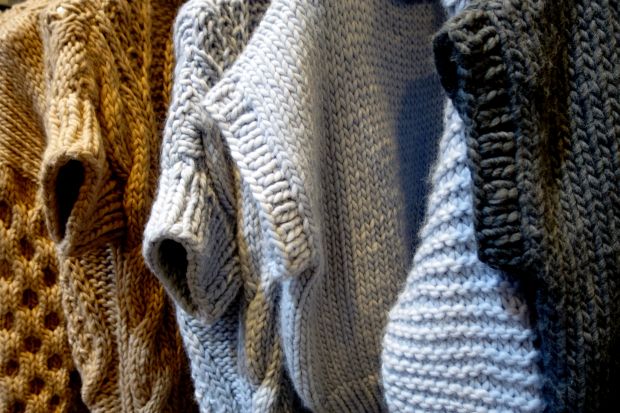 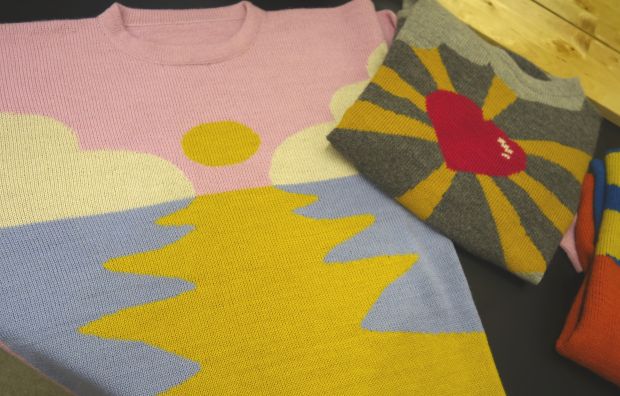 Hand knitted pullovers in the style of 70s was seen more frequently at the trade fairs, as for example at „Donna Wilson“. The London based label works exclusively with Scottish wool, which is also entangled there. The classic-cuted, multicolored sweaters have Norwegian pattern, animal or fantasy motifs. An other ways goes the Belgian label „I love Mr Mittens“ which is specialiced for heavy, chunky knits which are mainly handworked in Peru, out of 100% wool in its finest and thickest quality. Designer Stéphanie Caulier started knitting during her stay in Australia some years ago and her brand has grown up thanks to a big social media interest. The thick and soft oversize sweaters and beanies in single colors are represented in the meantime also at big online and offline stores like Matches Fashion, Isetan and Shopbop. 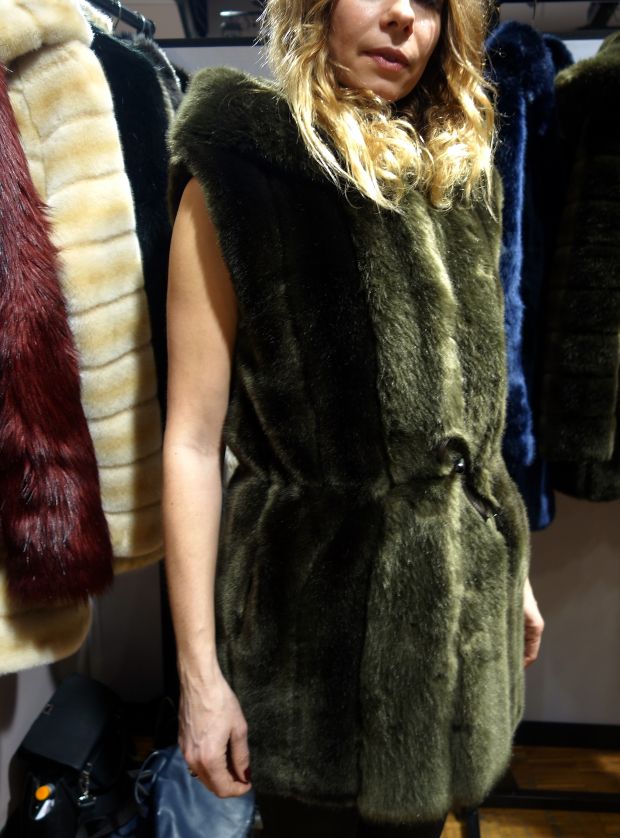 The shearling trend does not end, but it gets competition from the fake fur segment. Even Miu Miu's winter collection concentrated heavily on furs from chemical fibers. The fact that the qualities are getting better and the finished products resembles more and more to real fur, was the starting point for the new brand „Fuzz“ from Geneva. The Swiss label shows Fake Fur in the highest quality and classical cuts, with the prices quite close to real fur. 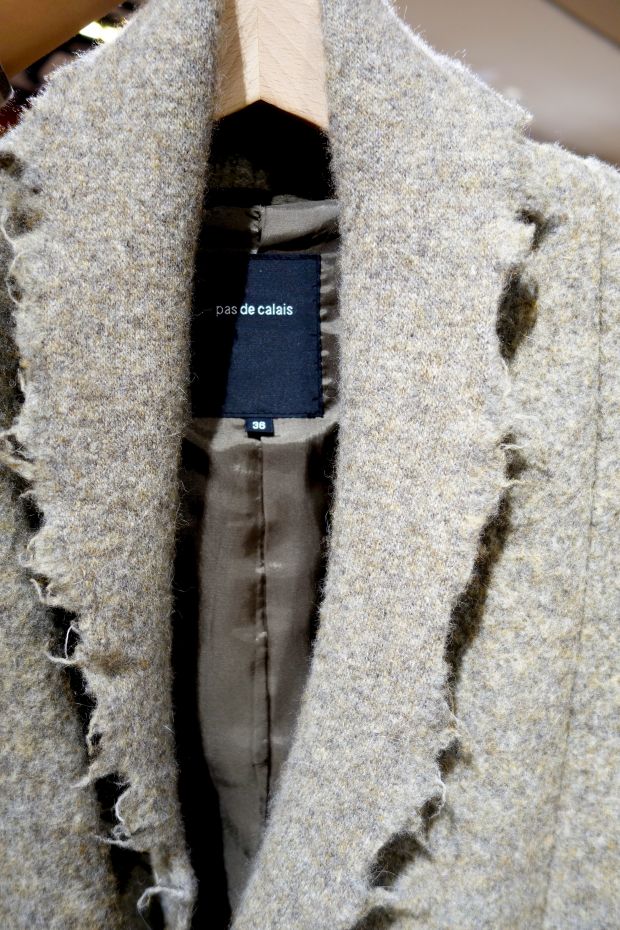 To enhance classics, many labels today rely on an elaborate finsihing with a visible, handy touch. In this approach, the Japanese label „Pas de Calai“ shows coats with frayed collars. Also „Maison de Soil“ from Tokyo worked on their clothes to create a "used" look, for example with slightly faded washings. The italian „Department Five“ create with a slightly frayed neckline on their sweaters a casual and modern vintage look. 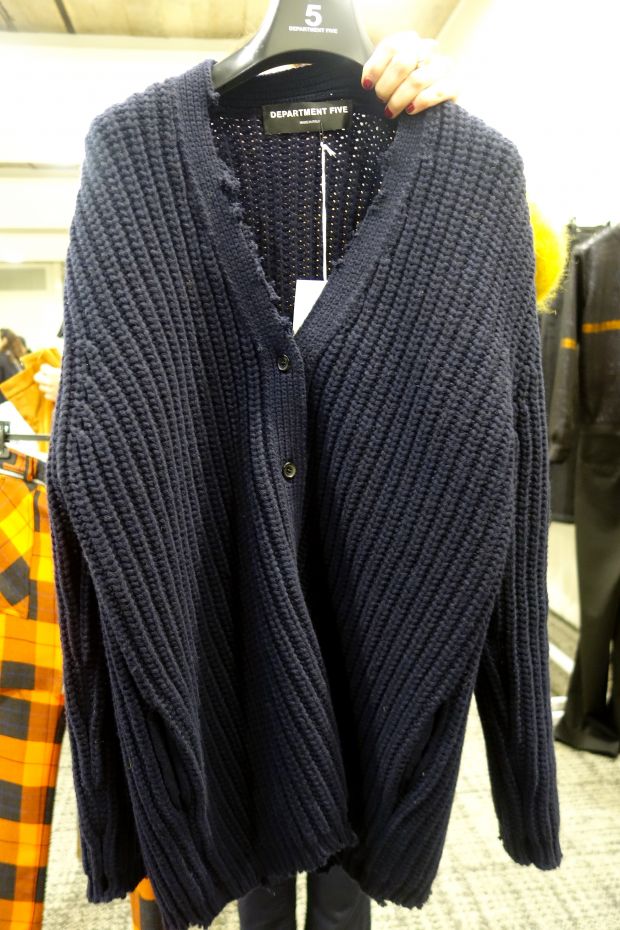 If we had to agree on the mostly shown trend color of the trade fairs, then Navy Blue is winner. Hope Stockholm, Department Five, Victoria/Tomas and many others set on this classic color, which also plays a very important role in the designers fashion segment. Dries Van Noten showed a lot of navy blue models in his winter collection for men and Maria Grazia Chiuri devoted almost her entire Dior collection to this color. 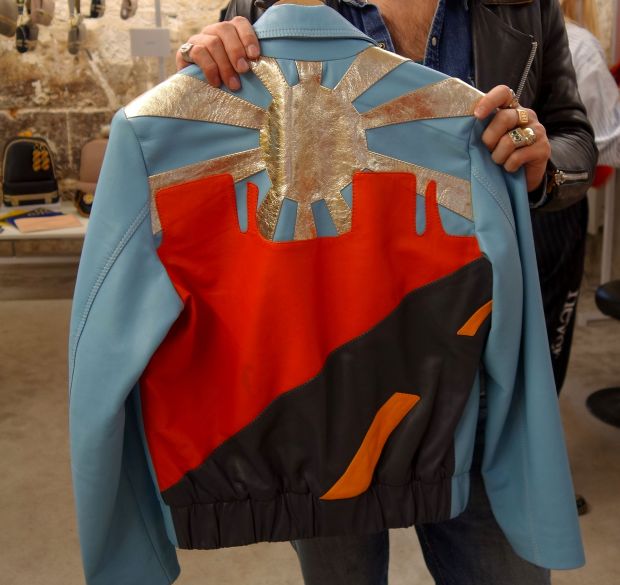 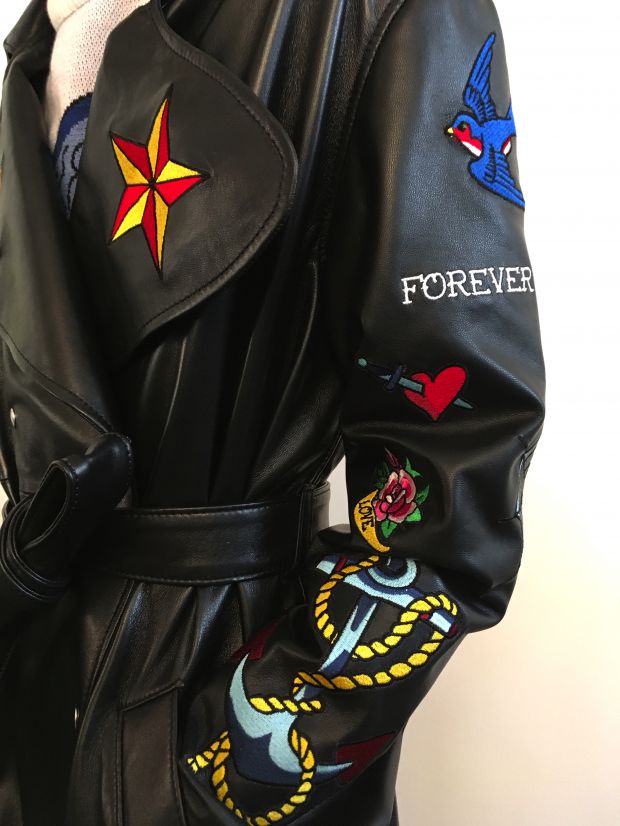 The patchwork trend in denim fashion continues to the next winter. He is also spreading to other garments: The Parisian Pierre Rioufol shows leather jackets with elaborate designs for the back, in which he designs motifs with different-colored leather using a patchwork technique. Many accessoires labels, such as Joanna Solea and Visone, also featured marquetry or patchwork on their bags and wallets. Alternative for the patchwork trend are elaborate embroidery or decorations with pearls or cristals on denim, also seen on the catwalk of Isabel Marant. 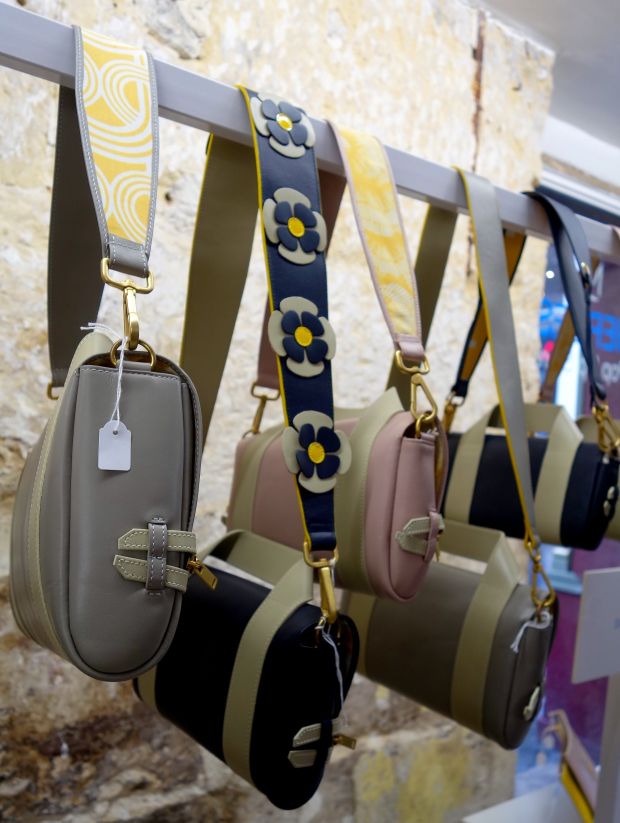 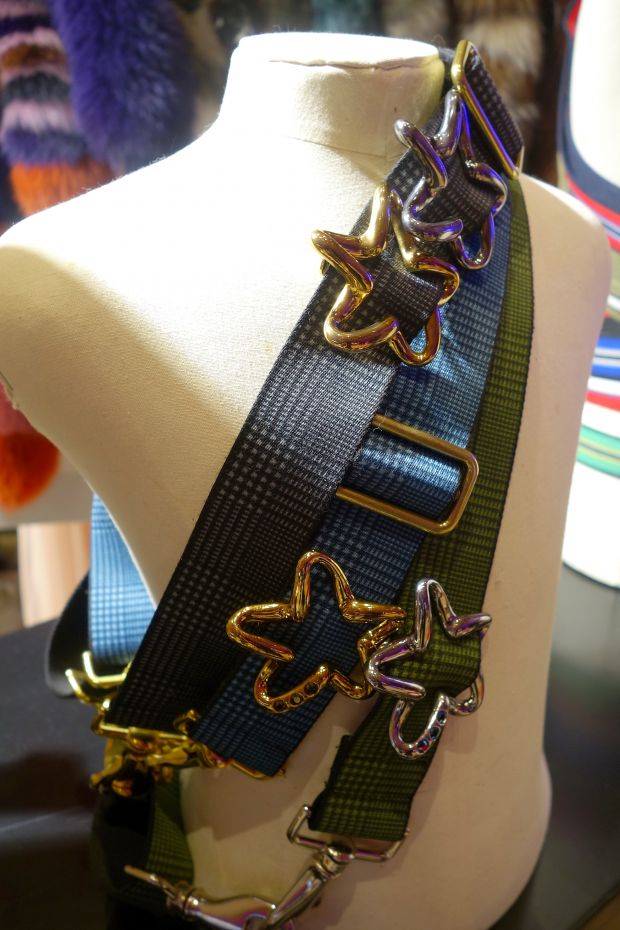 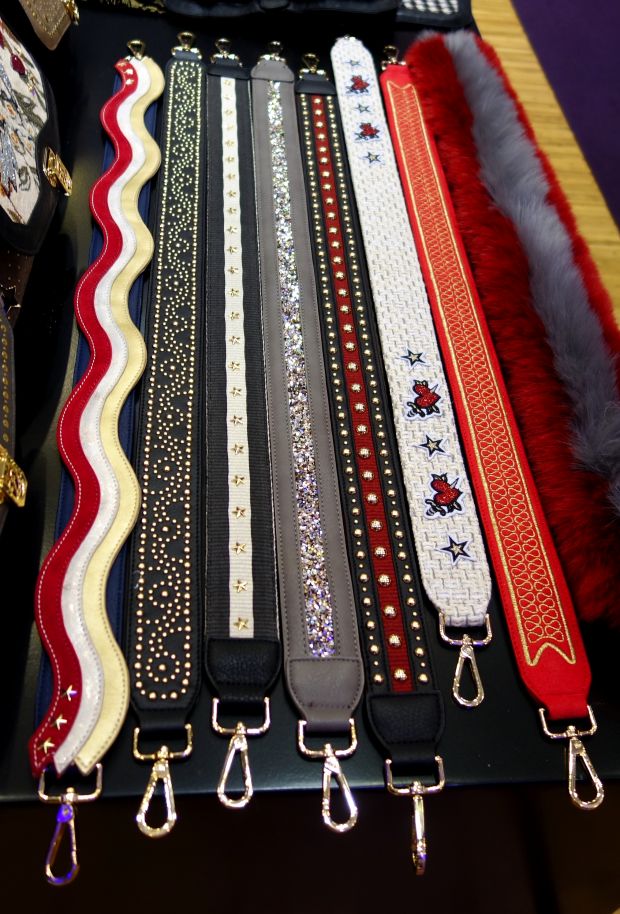 Wide and elaborately embroidered or multi-colored crossbody straps for handbags that can be purchased individually are currently in high demand. Accordingly, the range is diverse: Darris from Paris put on straps in pastel tones with decorative patches, p.e. in form of flowers. The German Gabrielle Frantzen shows plain cotton handels which are upgraded with her own jewellery broochs. The Italian accessory label Numero Venti Due has affordable cotton models on offer, which are embroidered or fitted with rivets and sequins. All of the leather are the straps of Baa from Turkey, which are embossed, embroidered or refined with sewn fringes. 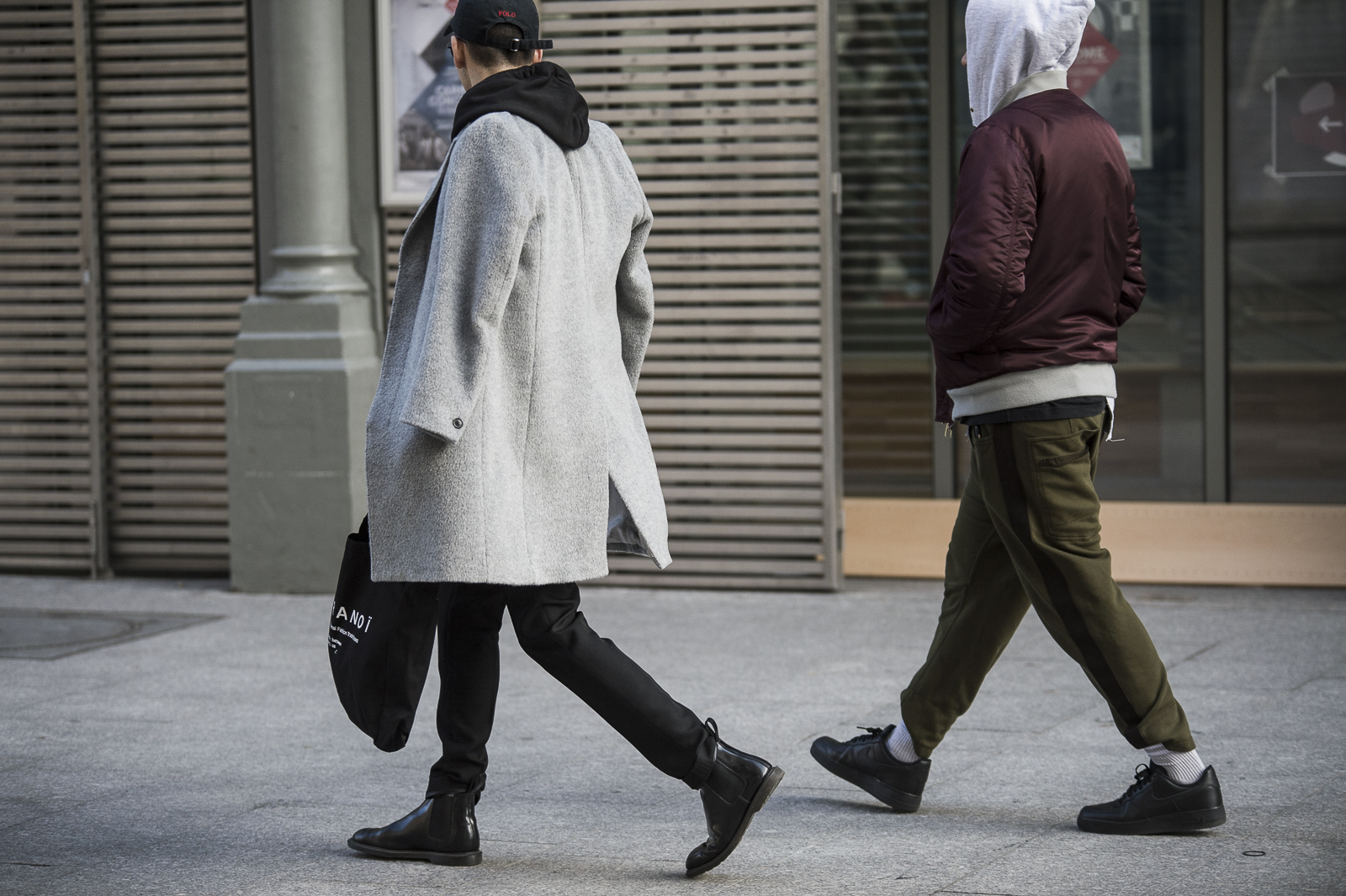 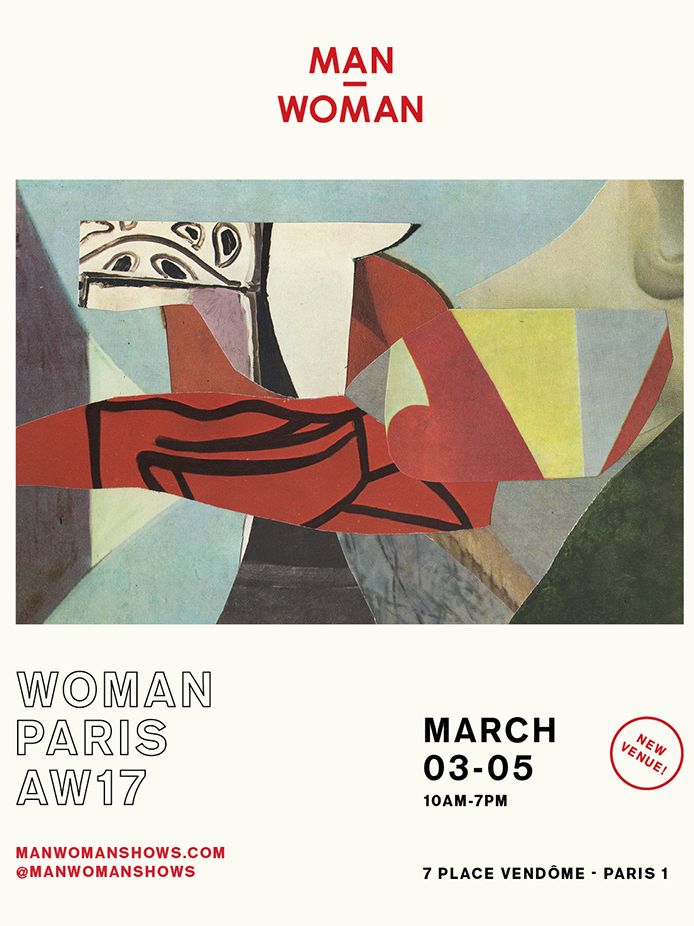