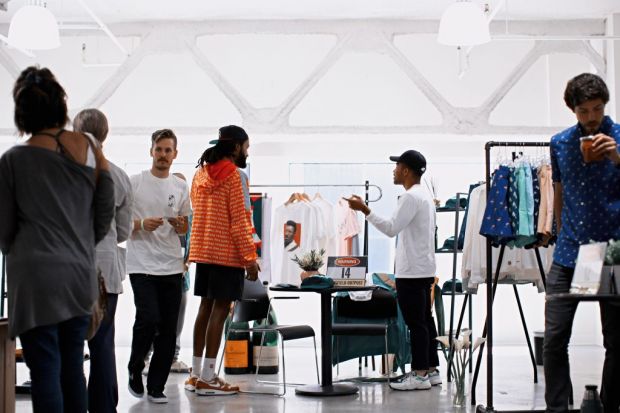 In the US and Europe, the trade show landscape will remain severely disrupted in the upcoming winter season. Here are the latest news from Amsterdam, London, Los Angeles and New York...


Modefabriek cancels its January edition
A month ago, Modefabriek had confirmed its January date and announced the move to a new location, now the organizer of the Amsterdam fashion trade show pulls the plug: Due to the latest developments regarding the coronavirus and the continuing restrictions explained by Dutch Prime Minister Mark Rutte this week, Modefabriek cancels its physical show scheduled 24-25 January.
Instead, brands and buyers can switch to the digital version on Modefabriek.nl, which was launched in August. According to Modefabriek, the digital platform will expand in the coming period with podcasts and online lectures, as well as with additional possibilities for video content and collection presentations.
The next physical trade show is scheduled 11 -12 July 2021.

Scoop and Pure London will unite for September 2021 show
After the decision to skip the February editions of Scoop and Pure, trade show organizer Hyve Group shrinks both events and announces the merge of Scoop and Pure for the September events: ’Scoop X Pure’ will take place on 12-14 September 2021 at the Saatchi Gallery with Pure leaving its established location at London Olympia.
Curated by Scoop founder and managing director, Karen Radley, Scoop X Pure will be designed to offer a “department store” atmosphere by showcasing home and lifestyle products in addition to fashion collections and labels across the Scoop and Pure London rosters.
Following the cancelation of Hyve Group’s menswear event Jacket Required for July, Scoop X Pure will also feature a selected menswear edit, with a view to showcasing labels with both a men’s and womenswear offering.

Liberty Fairs cancels physical events and partners with LA Men’s Market
Due to the ongoing restrictions caused by the pandemic Liberty Fairs has canceled its New York and Las Vegas-based physical trade shows scheduled for January and February and has announced the launch of the next season’s digital trade show  in partnership with LA Men’s Market. The two menswear events will join forces online while Liberty is again partnering with wholesale platform Joor to bring the digital format to life. The show will run for a 4-week period beginning on February 9, 2021.
“With Liberty typically geared towards fall and spring markets; and LA Men’s typically focused on summer and holiday markets, this makes for the perfect collaboration for our collective base of buyers,” says Edwina Kulego, VP of Liberty Lifestyle & Fashion Fairs.
This partnership builds on a series of LF&LF events powered by Joor during the summer and fall seasons, including Cabana, Capsule and Liberty Men’s.

Designers&Agents cancels Los Angeles and New York editions
Boutique show D&A Designers&Agents follows the example of the other US trade show hosts and decided to cancel its editions planned in January in Los Angeles and in February in New York.
D&A will continue to offer D&A Digital for the upcoming season as a virtual substitute.
The next physical event of D&A in Los Angeles is scheduled 8-10 March, D&A New York is planned to run 18-20 September.

Première Vision New York is postponed
Fabric trade show organizer Première Vision has published on its website that the New York edition will be postponed. The event was initially scheduled 19-20 January, 2021. A new date has not been announced yet. Potential visitors are asked to switch to PV's online sourcing platform PV Marketplace to get access to material and fabrics collections all year long.