‘Magic’ Trade Show to move under one roof

The Las Vegas trade show landscape is continually evolving, and in August 2019 Magic will make its next big move. Informa Exhibitions, the world’s largest trade show producer who recently acquired UBM Fashion, announced it will move all of its shows to the Las Vegas Convention Center (LVCC). Project, Project Womens, Magic Mens The Tents, Pooltradeshow, Curve Las Vegas, Stitch@Project Women’s and Children’s Club, which have been held at the Mandalay Bay Convention Center, will join WWDMagic, FNPlatform and Sourcing at Magic at the LVCC. In 2021, the LVCC will complete an expansion, aiming to make it one of the most technologically-advanced convention centers in the world.

“The move to a single venue will allow us to create unique neighborhoods, with a community feel, provide one-stop shopping for retailers and keep a variety of distinct shows that represent the most distinguished breadth of brands across all of fashion,” said Mark Temple-Smith, Managing Director of Informa Exhibitions’ Fashion business. “Logistically, the move to a single campus means a shift from two venues to one. Fundamentally, though, it’s a new perspective and a sharpened commitment to building a singular, powerful experience for our entire industry,” he added. 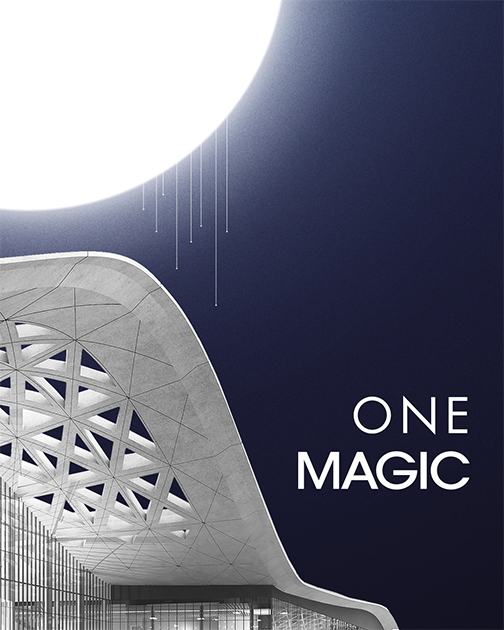 Photo: Magic
Key visual new Magic
Magic’s mens’ shows will build on the success of N:ow, the new streetwear area which debuted at Project in August 2018 and grew 83 percent this season. “N:ow is a seed level action by us to change things up and evolve the space in a smart way that helps both brand and attendee,” said Jason Peskin, Brand Director of Men’s and lead on N:ow at Project. “It’s just the beginning for us,” said Peskin, who attributes the success of the area to listening to the community. “We called all the different people that we thought were influential in that community which were young streetwear culturally relevant brands and we asked them, ‘what do you want to see?’” he explained. “We took all of that and created that space based on what we heard.” Some of the implementations included making N:ow a communal open area, providing amenities such as food and beverages and adding panels and seminars that can help brands develop their businesses.

“I think N:ow really encapsulates one of our goals and that’s to create community, connectivity and content,” said Lizette Chin, President of Men’s. “Our goal outside of N:ow is actually to look at the template... and really use it as a template across the board,” she explained. “So whether it’s The Tents community, whether it’s the District community, whether it’s Blue, which represents our denim, our goal is to really create and define communities on the floor that speak to the brands that are within that space and the retailers that buy them,” she explained.

According to Chin, the move to the LVCC is also inspired by listening to the needs and feedback from the community including buyers, many of whom presently only have time to shop one of the two venues. “Looking through our data we realized 50 percent of the retailers who come to Las Vegas choose one venue over the other. So now they don’t have to. We will provide all of the conveniences and amenities under one roof,” explained Chin. The single venue will help make the buying experience more efficient and productive, providing more opportunities for brands and retailers to connect. Thanks to the ‘One-Magic’ mobile app, which soft launched during the Feb. 5 to 7 run of the Vegas shows, buyers will be able to effectively navigate the massive LVCC venue to find relevant brands and products across all shows in addition to enjoying other digital concierge services.