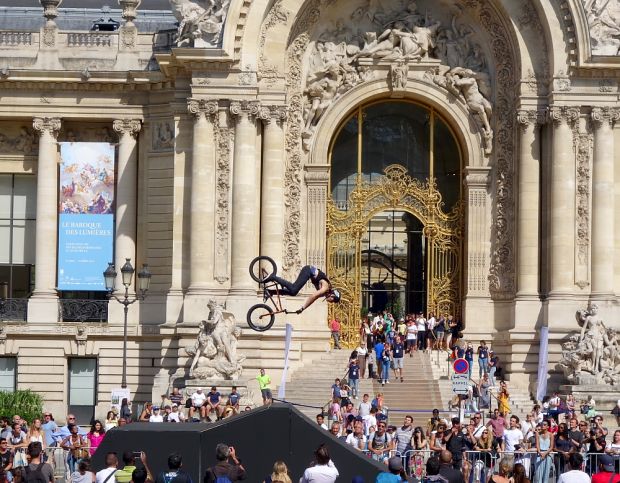 It was a difficult season for the Parisian menswear trade shows that ended in Paris on Sunday (MAN, Tranoi) and Monday (Capsule). A heat wave plus two large events turned the city into a traffic chaos with an ample blockade of the city center: during Friday and Saturday, sporting activities were built around the River Seine to support the Paris Olympic application. On Saturday, the Gay Pride on the Rive Gauche separated the city into two parts. A transfer from West to East became almost impossible. This had a negative impact on the visitor rates at the fairs. 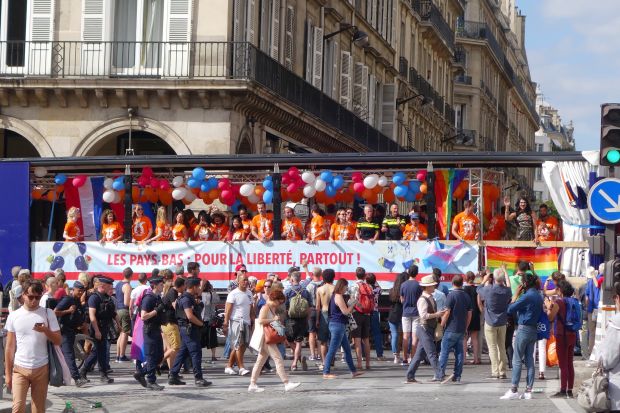 Correspondingly, at Tranoi’s Carreau du Temple location, little or nothing was happening on Saturday afternoon – even though the Marais location is offering best preconditions: Surrounded by showrooms and flushed by daylight, the former and newly renovated market hall is a popular spot for events. Marcy Szwarcburt from Belgian brand Maison Marcy confessed his displeasure: "While at Pitti Uomo, journalists and buyers can concentrate on the show because there is no other event in the city, in Paris there is an excessive supply of events and parties. The fairs are also divided into too many different locations." The situation was much better at Tranoi’s traditional location at La Bourse: Animated by several fashion shows, such as by the Israeli Hed Mayner or the Central Saint Martin's graduate Chin Men, this location attracted visitors. The outside bar was a popular spot for relaxing, too.

Altogether, Tranoi combined 250 brands at two locations, including many accessories and women's pre-collections. Compared to the other trade fairs, Tranoi presented the largest selection of women's fashion. 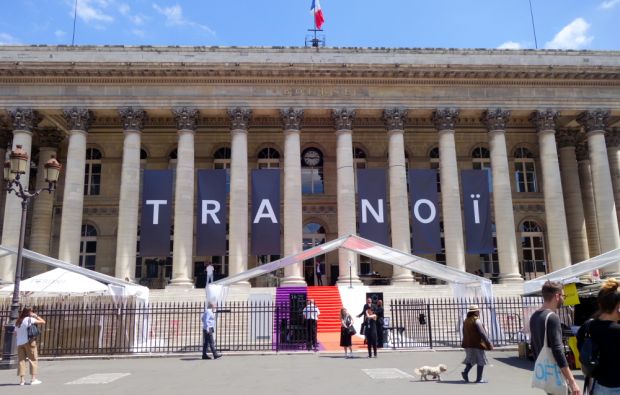 The Paris branch of trade show Man/Woman is becoming more and more established as the most important fair during the local menswear week. The move from Republique to the centrally situated Place Vendôme, which took place in March for the womenswear edition, is very well received by visitors. Around 100 brands were presented in the two locations, separated from each other by only a few minutes' walk: the Pavillon Vendôme and the splendid 18th century palace of the Hôtel d'Evreux. Particularly at the Evreux location, the relatively small rooms created an intimate showroom ambience that allowed visitors concentrated communication with the brands. Gonzalo Fonseca, founder of the Spanish accessories and footwear company Steve Mono: "It is not a mass appeal, but there are always visitors dropping in. I am quite pleased with the show. Man/Woman also offered a show room alternative in the "Espace 5 Bis" of Rue Froissart in the Marais district, where further 30 brands were able to welcome customers until today. 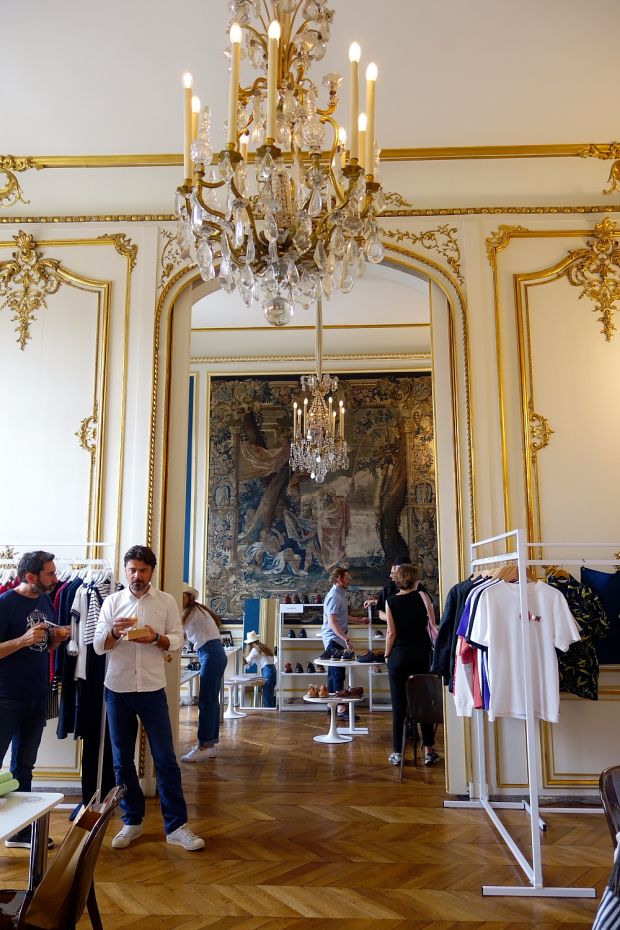 Held in the 5th arrondissement at the Maison de la Mutualité, Capsule combined 90 brands on two floors and offered the widest range of sports- and streetwear of the Paris fairs. However, due to the precarious traffic conditions during the fashion show weekend, the exhibitors also suffered from a lack of visitors. Cyrill Tourres, European agent of Bata Heritage: "It's really dead here. I asked for a stand at Man, but they were full. The Olympic events and the Gay Pride have hurt us very much." Capsule closed its gates on Monday. 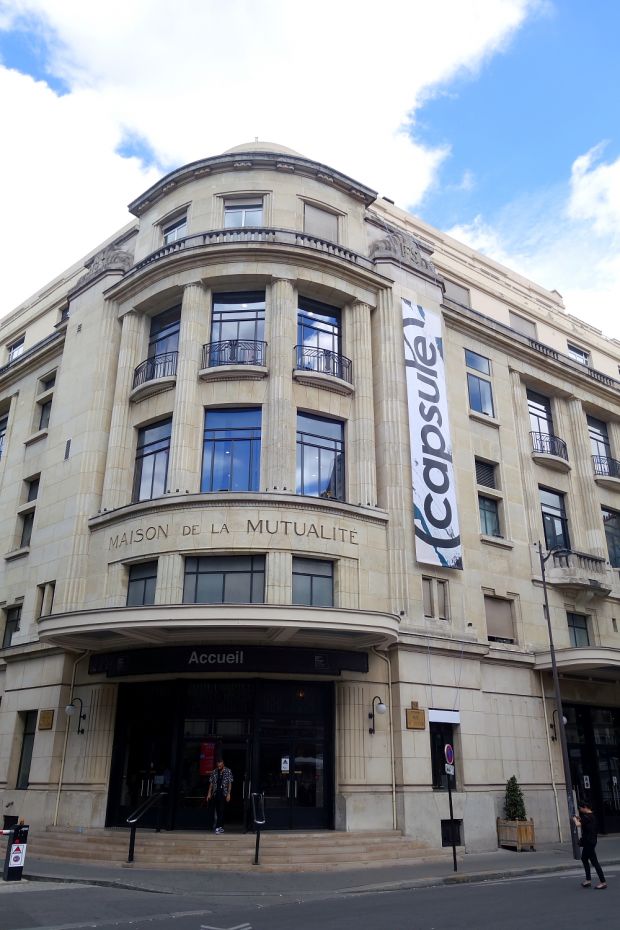 The Resident Showroom, held for the second time at the Bastille Design Center on Boulevard Richard Lenoir, had the most diversified offer of all Parisian fairs, with many start-up companies from different countries. The exhibitors were quite satisfied with the reception of this new fair, which was held very intimately due to the limited space. Also here, some brands found a space that had not been accepted at the big trade fairs. Pierre-Edouard Derain from young Parisian label Ancor: "Of course, it is a question of costs. We are a small company. We couldn’t afford the other trade shows. Resident Showroom has just started and must become more and more known.“ 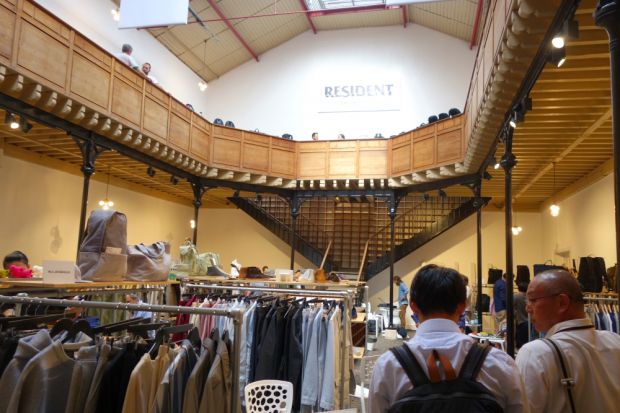 The most important trends of the Parisian menswear trade fairs

Fashion inspired by working clothes was certainly the most important trend theme at the fairs. Above all, the Japanese showed a great deal of jackets inspired by outfits from workers, fishermen or handicrafts – especially in raw denim quality. See examples of Japan Blue Co. or Garbstore from London (both Man/Woman). The French professional clothing manufacturer Vétra has teamed up with Closed for a workwear denim capsule and Nigel Cabourn has revived the old English work clothing company Lybro from 1927. 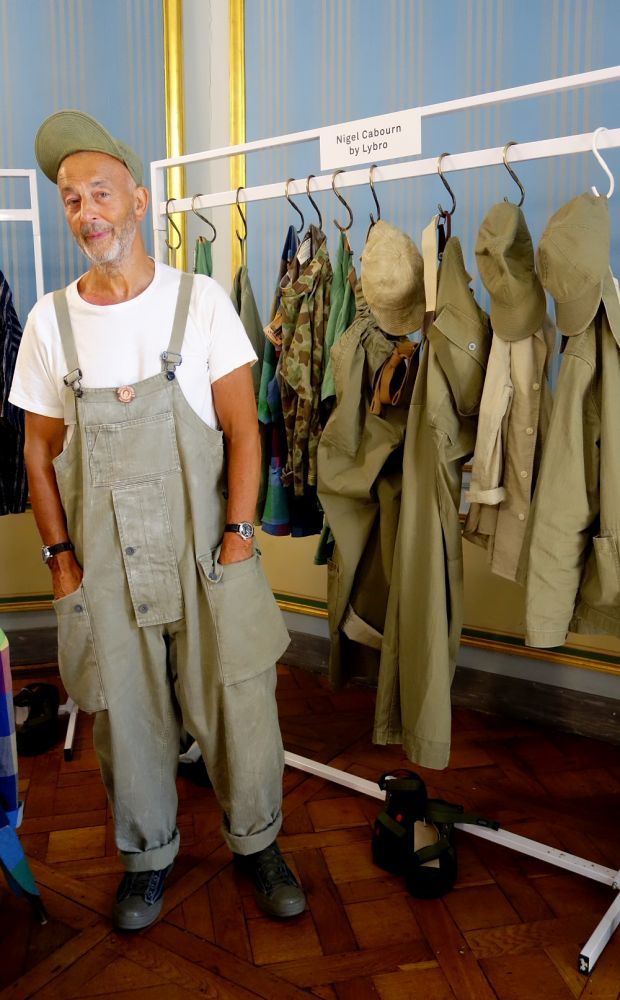 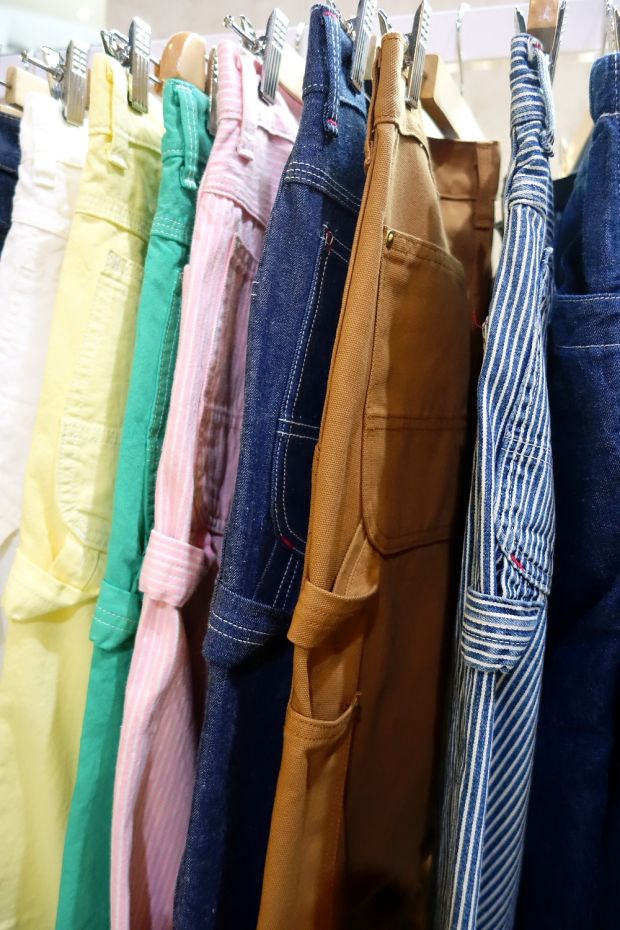 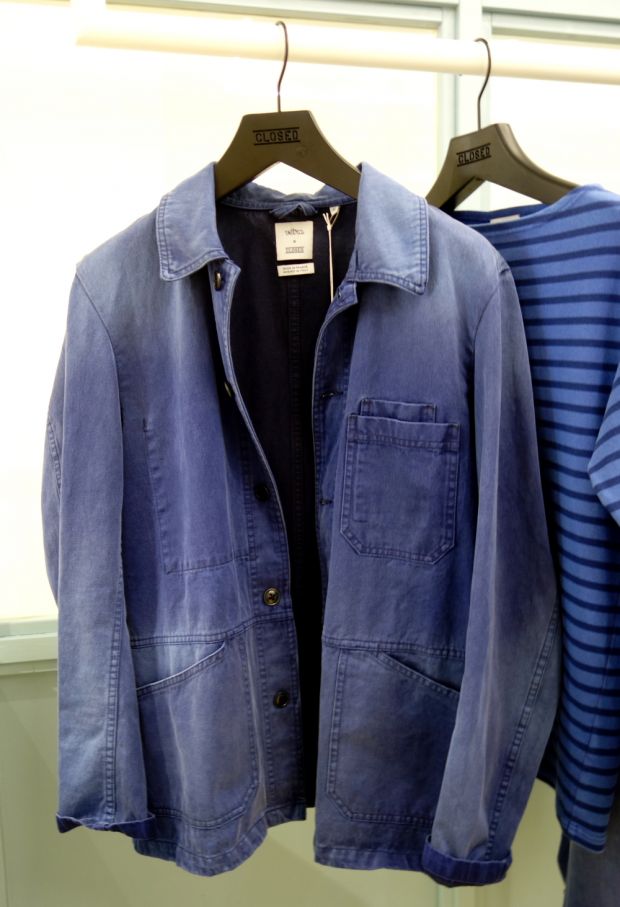 Snoopy, Mickey Mouse or the manga figure Astro Boy are popular motifs for capsule collections this season. Collaboration of this kind can be found for example at Bata Heritage (Capsule), Moa Masters (Tranoi) or Paul & Joe Sisters. The Parisian department store for men's fashion BHV Homme will even devote a special week to Disney characters this fall. 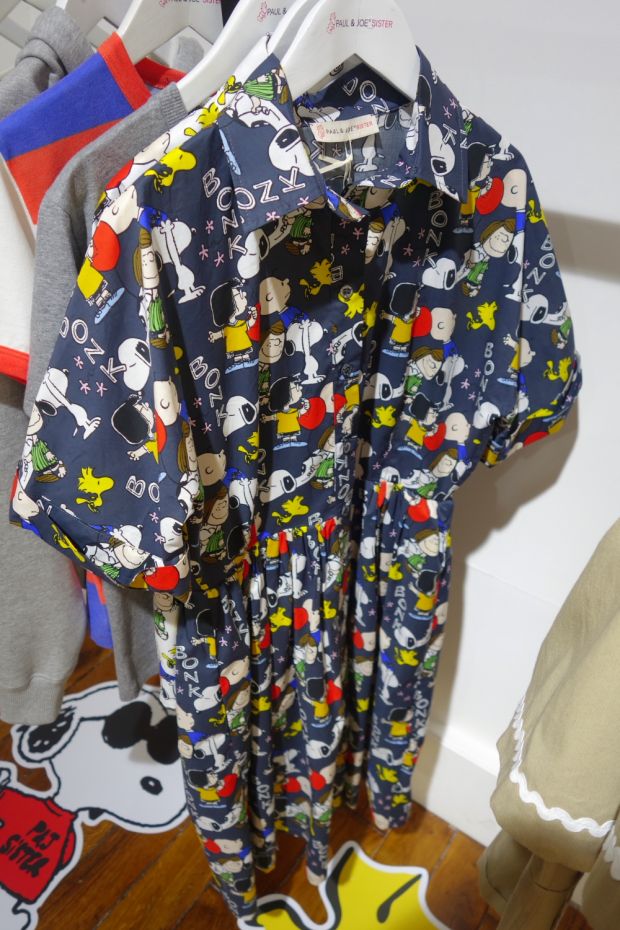 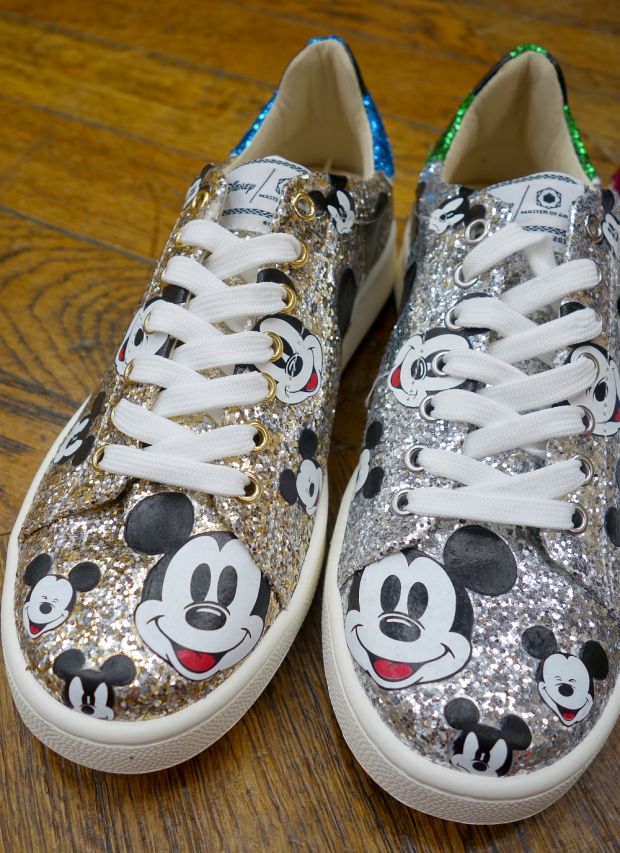 Recent discussions on a more conscious use of clothing have been picked up by many brands and worked out via vintage fashion. Atelier & Repairs (Man/Woman Showroom) from Los Angeles certainly showed one of the best approaches to the transformation of old jeans and military jackets with fabric remnants. The Japanese companies Blue Blue Japan and Bonum Tokyo are also pursuing a similar concept. Daf Dae (Tranoi) offered handpainting and special dying on its bespoke handcrafted-in-London menswear. Véja (Man/Woman) presented its new shoe model Surfrider, which is made entirely out of PET bottles. 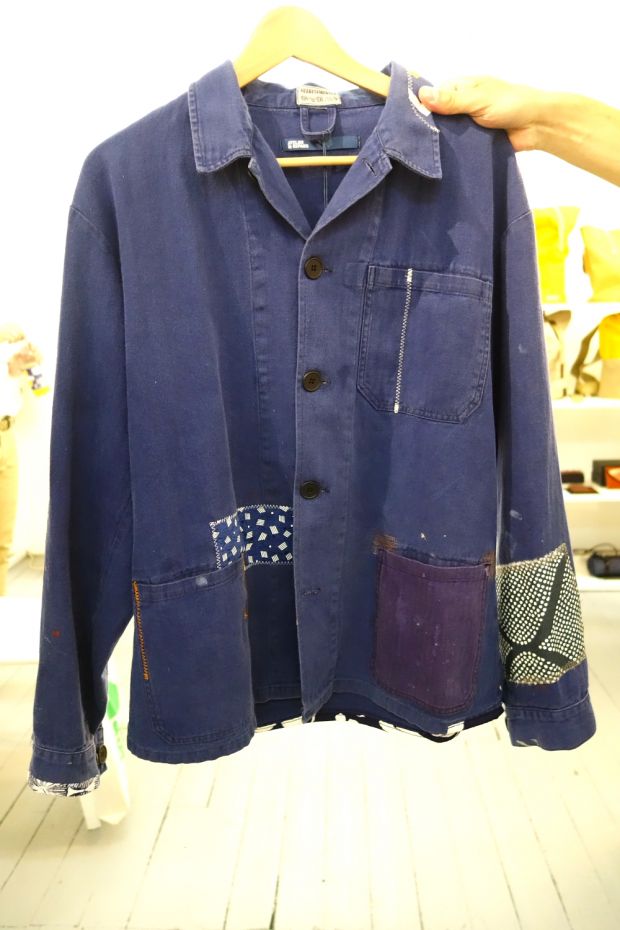 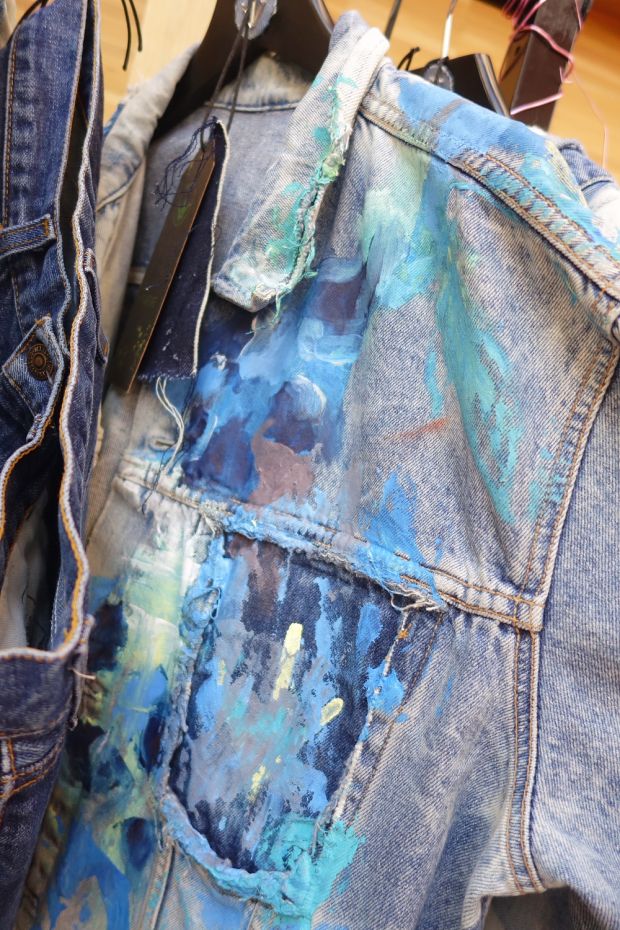 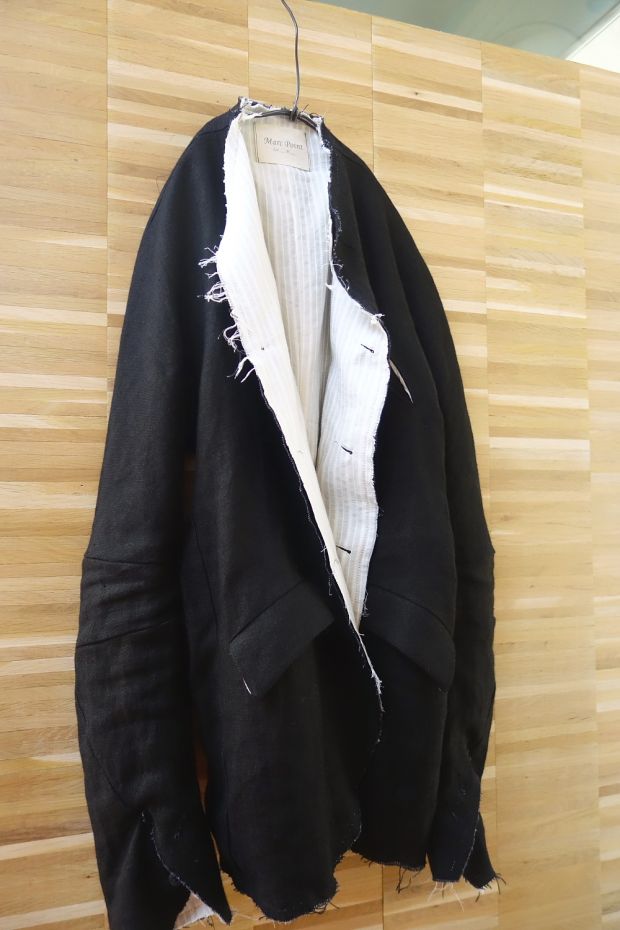 The revival of old brands which have a story to tell, are very popular with millennial customers. Therefore, many companies rely on old models like footwear company Bata Heritage (Capsule), which reissued shoes from the 1930s to 1970s (also one of Kurt Cobain’s favorite models). Reproduction of Found (Man/Woman) from Tokyo re-edit old military training shoes from France, Russia, USA, Germany and Italy. Sébastien Chirpaz from A Piece of Chic (Resident Showroom) comes from the vintage car scenery and produces scarves as they were formerly worn by convertible drivers, and he also transforms his grandfather’s underwear into tight-fitting T-shirts. 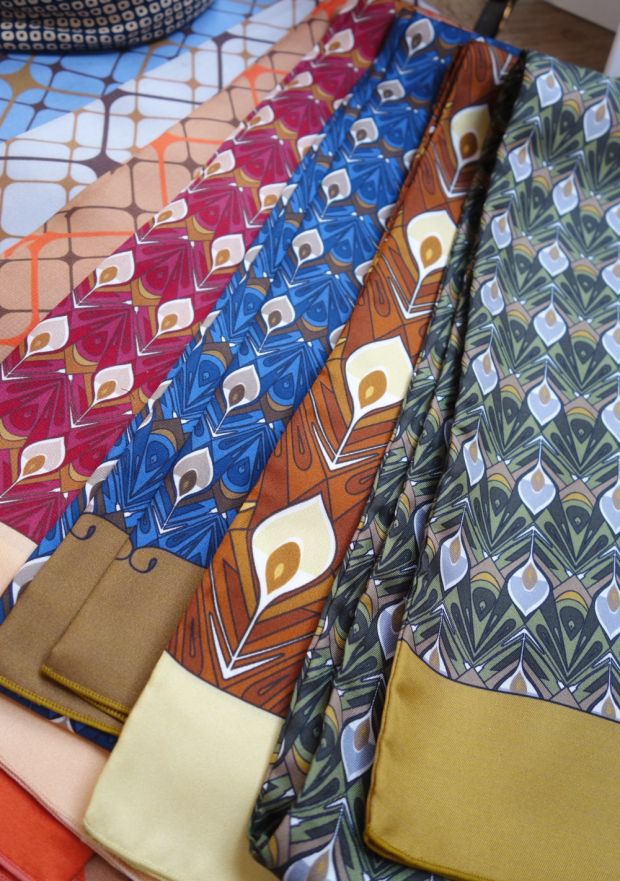 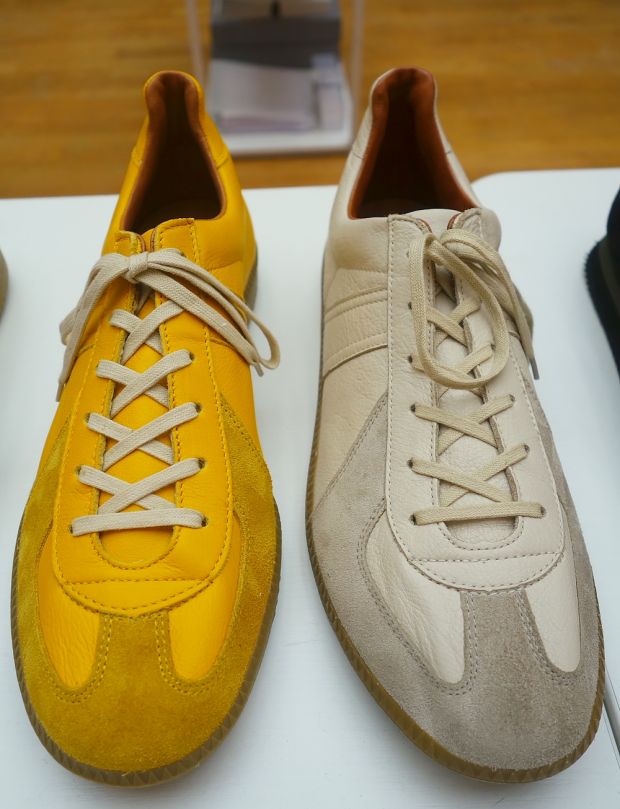 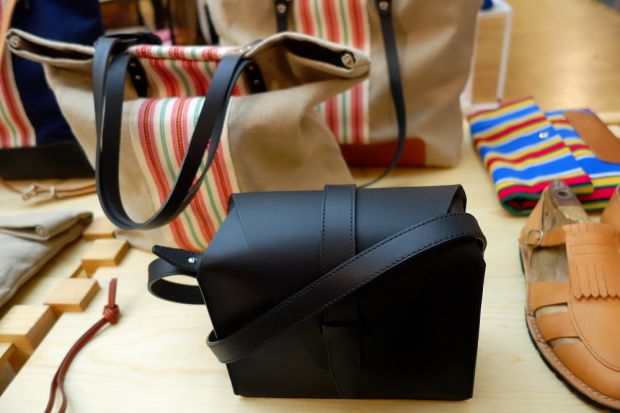 Kimonos, a big trend in womenswear, are slowly taking over the gentlemen. Maison Marcy, Pierre Louis Mascia (both Tranoi) as well as Collect by Japan Blue and Iam Kim Hono (Man/Woman) offer models in silk or linen. 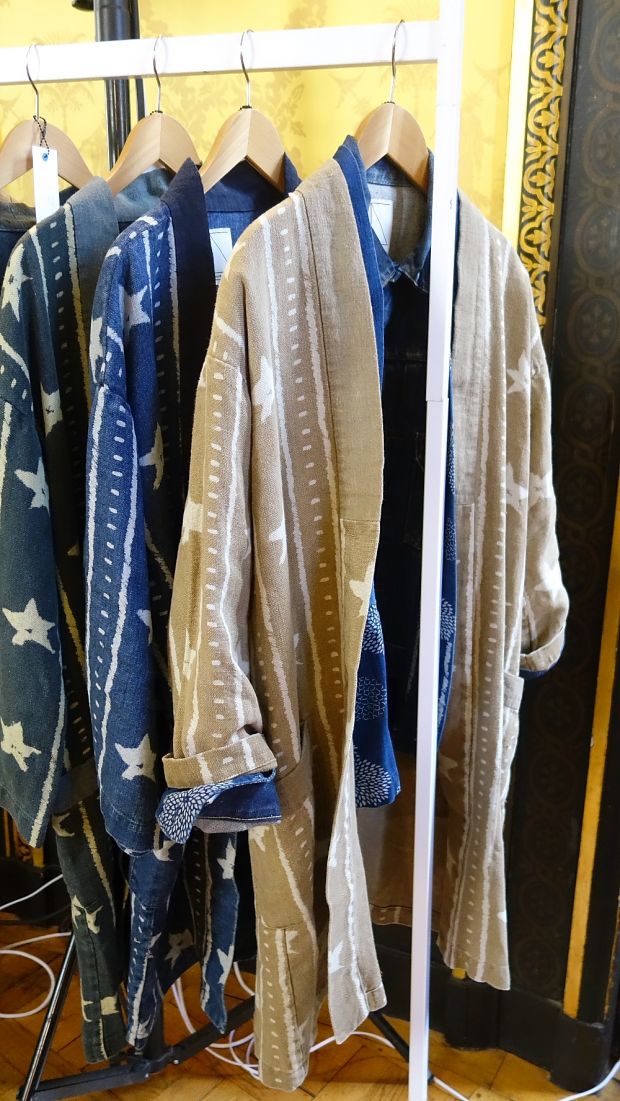 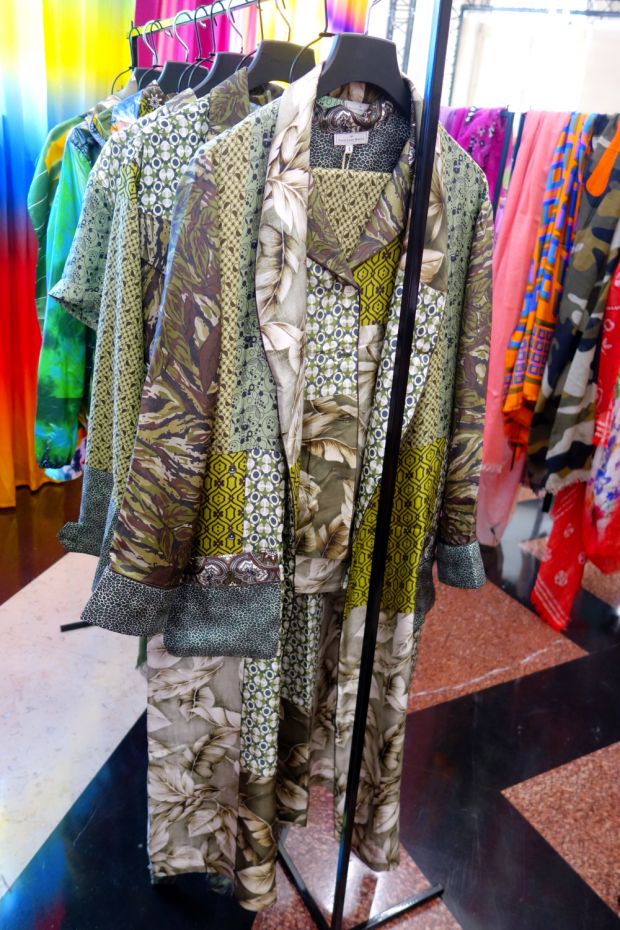 Many of the collections that have embraced the workwear trend include navy sweaters or T-shirts in their collections. Specialists in this topic are also the two French traditional brands Orcival (Man/Woman) and Armor Lux (Man/Woman), both have already supplied the French State Navy. 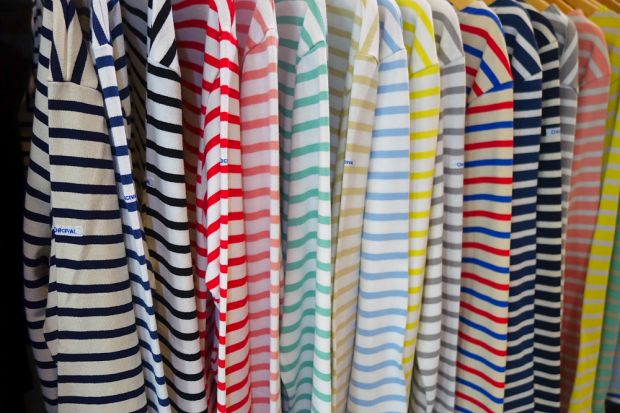 Trousers with side ribbons

Trousers and jeans with contrasting or sewn-in ribbons on the side like a tuxedo pant are another important commercial trend theme for women and men in the upcoming season. Examples are available, among others, at Maurizio Massimino (Tranoi) and Adnym Atelier (Man/Woman). 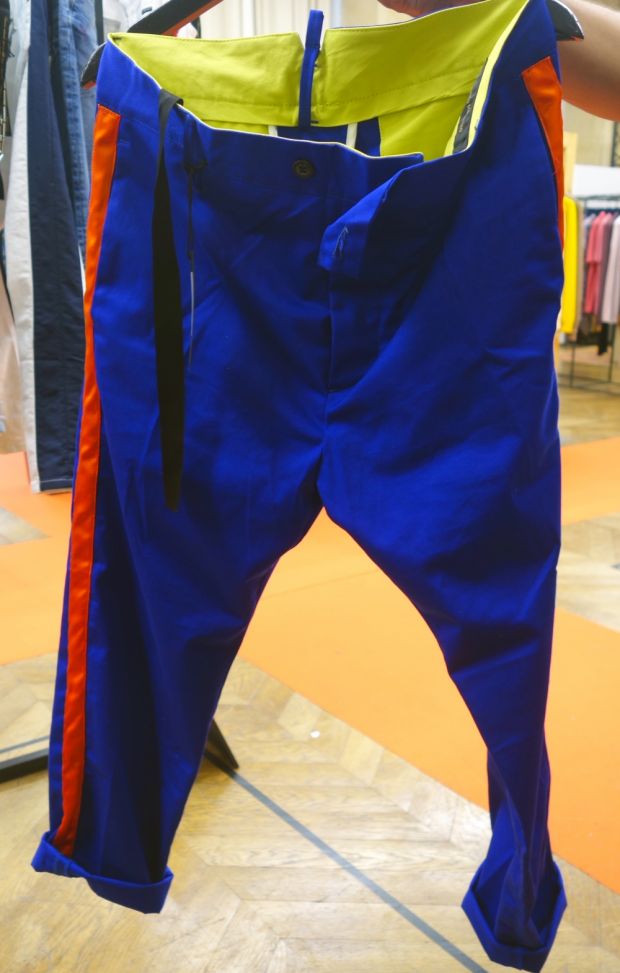 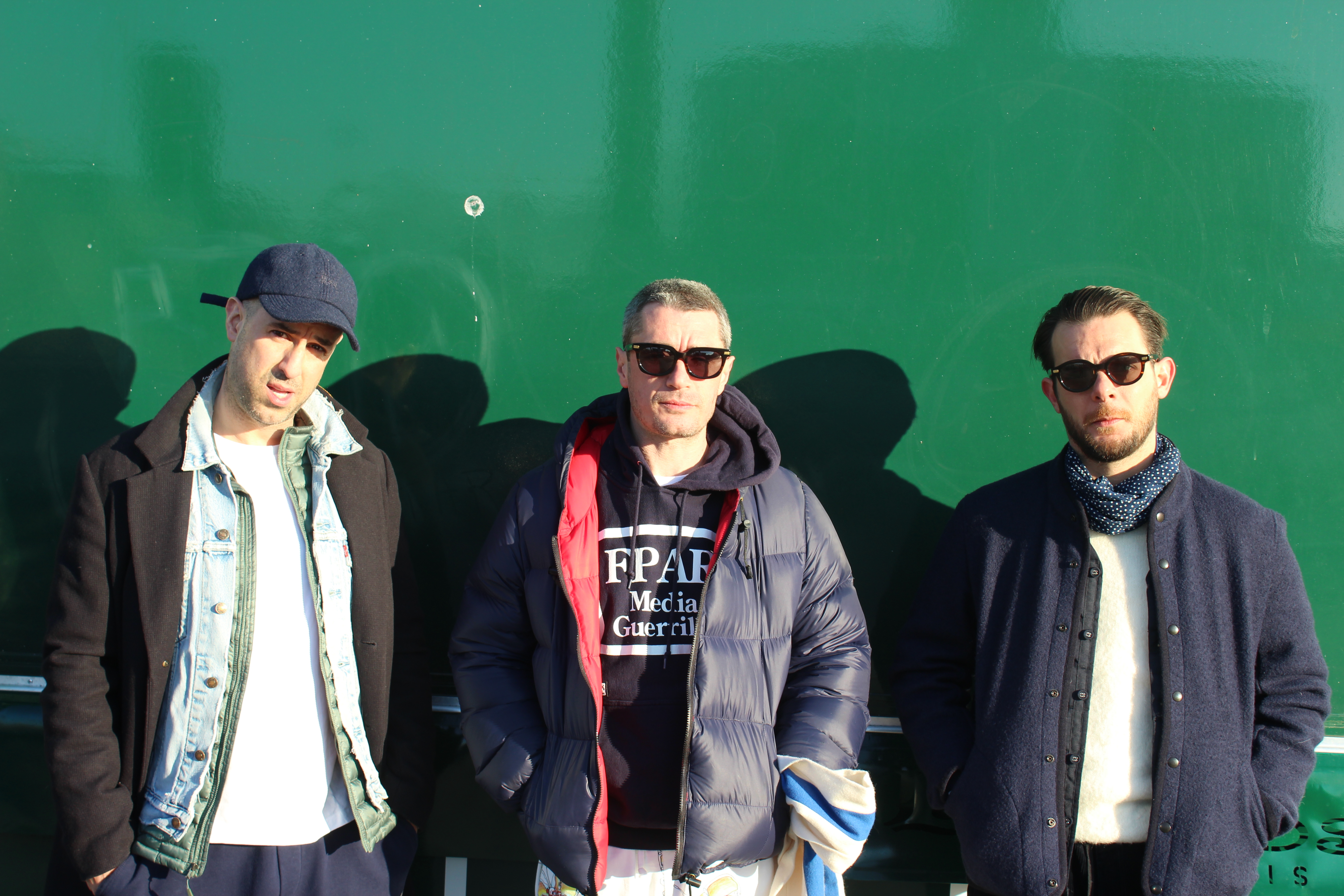 Keeping it real at Resident Showroom 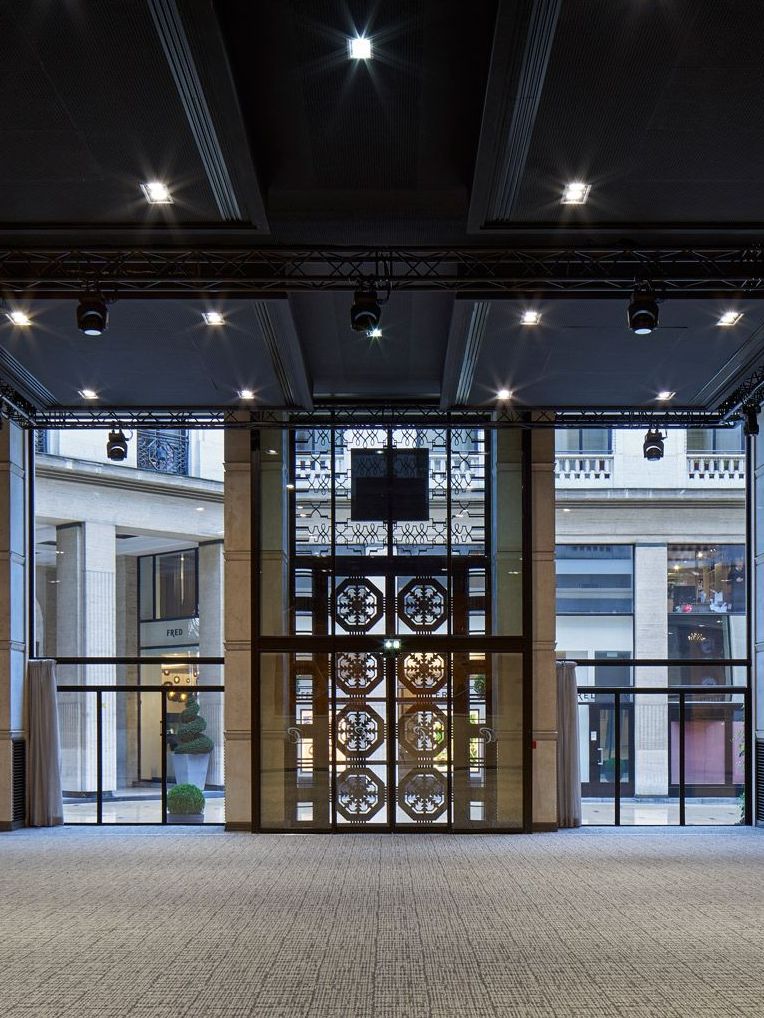 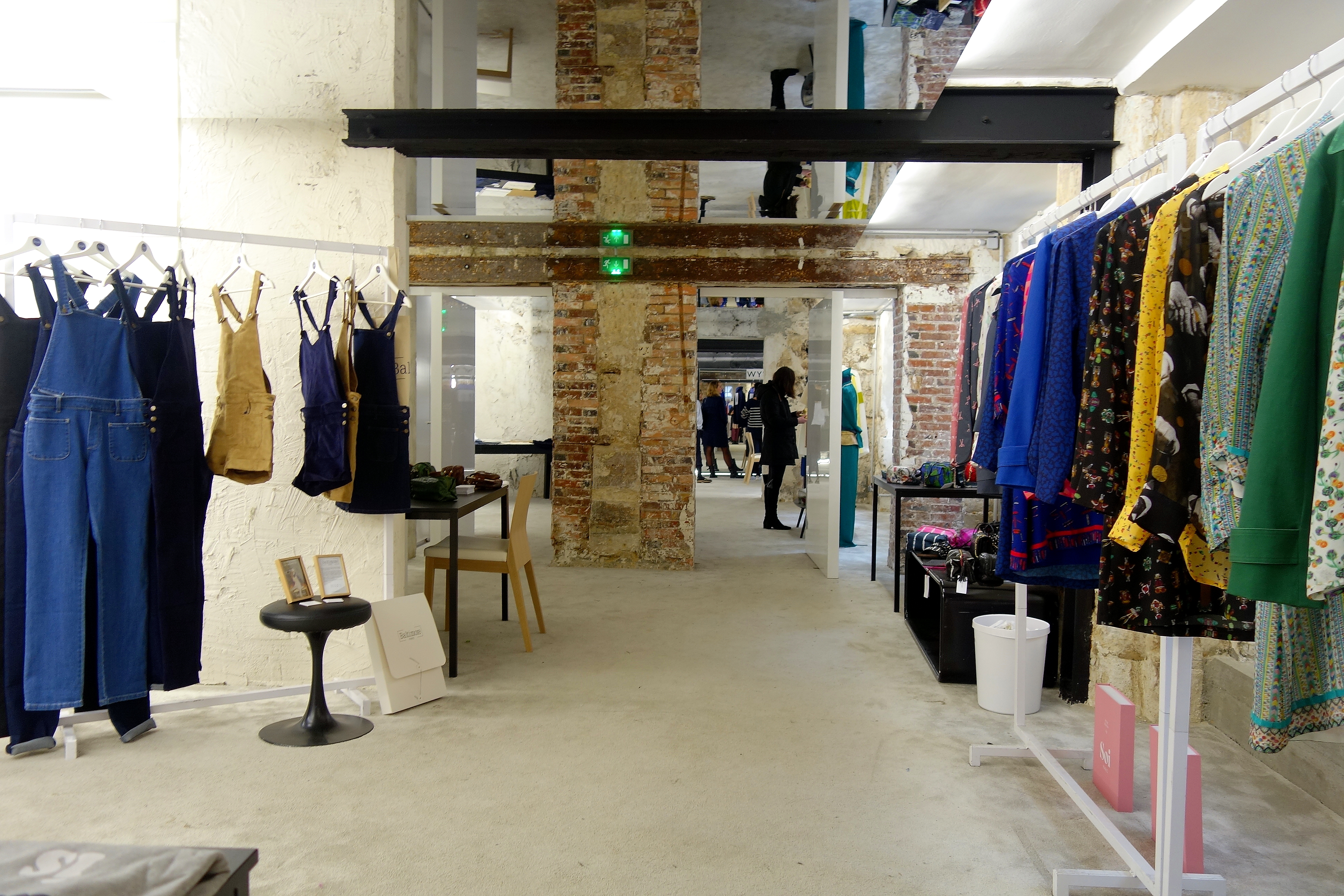