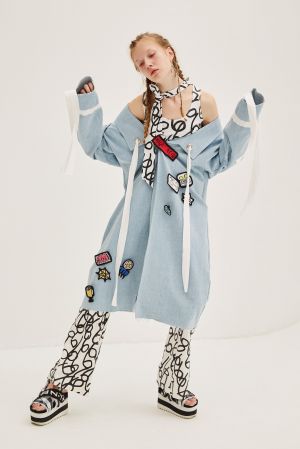 White Milano wants to be increasingly appreciated and visited by an always more international clientele. Thanks to an agreement with Confartigianato and Ice, (respectively an association representing Italian artisans and a state-owned institution aimed at promoting Italian initiatives and enterprises abroad) White will soon start a series of roadshows aimed at promoting itself and a selection of upcoming young designers internationally.

First stops of these presentations will be Shanghai on 15 October, Seoul on 20 October, Dubai on 23 October, and Berlin, inside the prestigious headquarters of the Italian Embassy, on 17 November.

“Today White is a leading show that has found its own DNA as it is supporting a specific segment as contemporary fashion. We have a specific project we are presenting in Milan and want to promote it worldwide,” commented Massimilano Bizzi, founder of White Milano. “We are one of the factors that have been contributing making Milan Fashion Week become always more appealing and successful and we want to further promote Milan all over the world thanks to this project.”

“In those years M.Seventy (the organization behind White Milano) has invested in its growth making White grow as a brand and not according to purely trade show’s strategies thanks to communication and cultural projects aimed at making White Milano grow always more international,” commented Brenda Bellei Bizzi, CEO, White. “Milan collects all novelties together in a single place. Who comes to Milan can avoid travelling all over the world,” she continues.

Among new sections there will be Whiteast hosting a selection of Chinese contemporary fashion designers and the special guest Jinnnn. Great attention will also be given to upcoming new areas including designers from Georgia, Belgium, Portugal and Argentina.