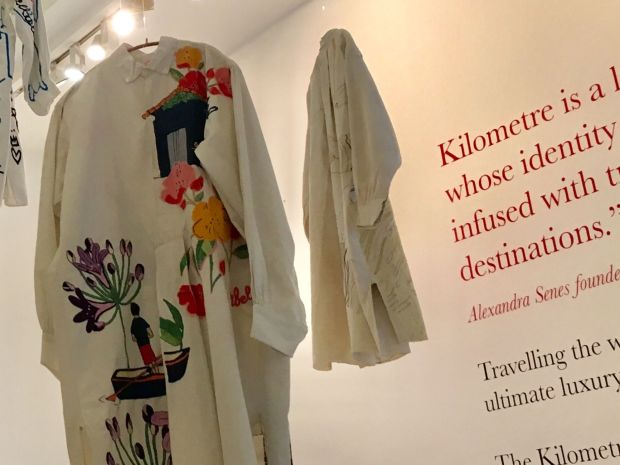 There was a celebratory air at London womenswear tradeshow Scoop (28-30 Jan.) this season – the cheerful greeters, with colorful silk shawls slung around their necks (boys and girls), set the tone. Entering the Saatchi Gallery halls, we were hit by another wave of color courtesy of Emma Greenhill and Kitty Arden – two artists turned designers of scarves and silkwear respectively. Chocaholics may know Arden as the creative behind Prestat’s distinctive boxes. Now, her almost otherworldly art has found its way onto palazzo pants, unisex shirts and halterneck tops. 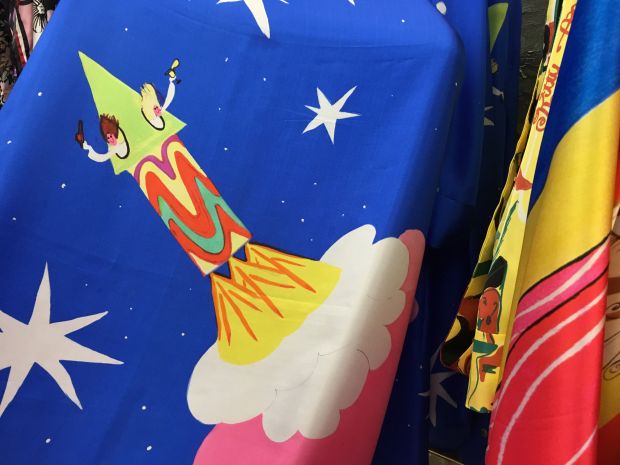 Said Kitty Arden about her first outing at Scoop: “I’ve met buyers from all over the world including Australia and China. It’s an ideal platform in which to introduce my new range of wearble art – not least since it’s set within the Saatchi gallery. The show was busy on the first day but it feels as if the crescendo is about to happen today – it’s buzzing.” 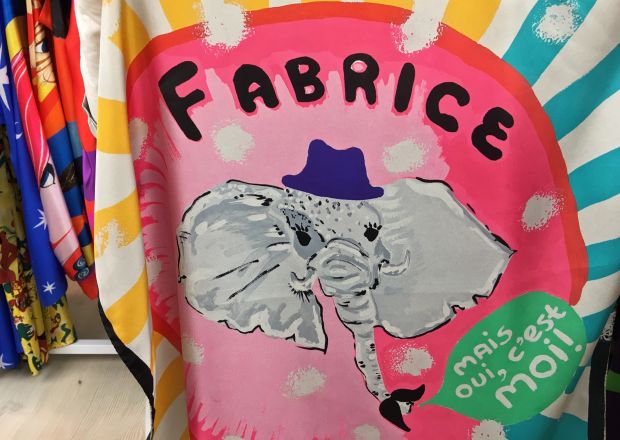 It’s evident that the printed silk scarf is a must-have for all seasons – we spotted them on the Scoop crowd (other than the greeters) worn with jeans and oversize knits. They even hung from wooden tables at the upstairs café. Emma Greenhill founded her UK-made scarf label four years ago. “The time felt right to apply my colorful paintings to scarves and each one tells a story (we loved Fabrice, the matchmaking elephant). “I have a significant following in Japan and I’ve built my brand with the help of Instagram. This is our second season at Scoop – we’ve had a really good show and a very busy one at that.” 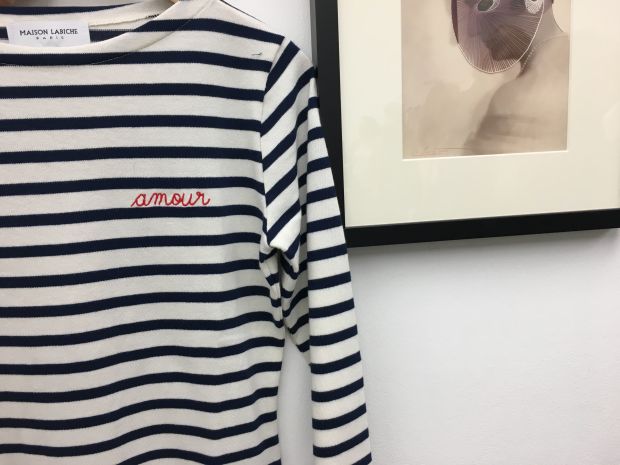 A little subtler in its approach, French label Maison Labiche focuses on cool casuals such as Breton tops and sweatshirts adorned with embroidered messages, such as “oh la la” and “amour.” Said Elena Servalli, director and co-founder of Five 0 Five, the agency representing the brand: “We do a lot of our sales appointments in our showroom, but Scoop is a good complement – also from a PR perspective.” 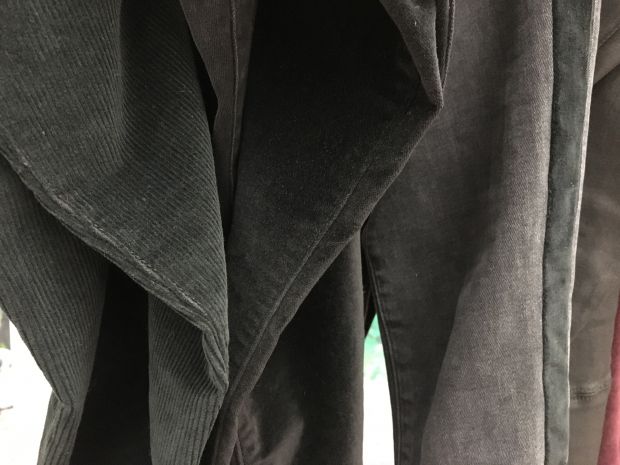 There wasn’t a great deal of denim on show this season at Scoop, but we found a varied range at DL1961. The brand makes its jeans from sustainable eucalyptus tree fiber, which makes the dye stay solid wash after wash. So which are the bestsellers this season? “Jeans with texture have sold incredibly well so far,” said Natasha Blades, account executive at London fashion agency Palladio Associates. “We’ve seen a 50% increase in sales of finishes featuring velvet, cord and wet-look finishes.” 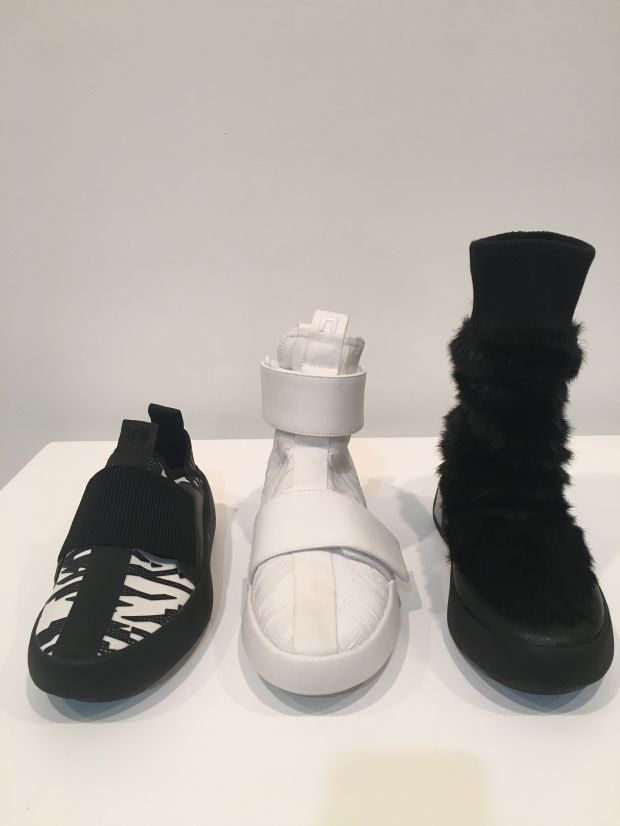 On the footwear front, United Nude’s new vegan sneakers and boots caught our eye. The range includes a high-top and slip-on – both of which are machine washable – as well as a faux fur boot. 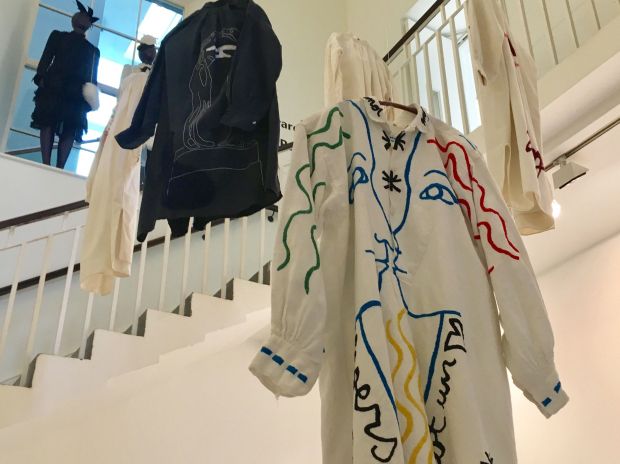 Every season, Scoop’s founder Karen Radley teams up with a designer or artist (or both) to create an installation – a feature that brings a nice community feel to the show. This time, Paris based label Kilometre Paris (founded two years ago by Alexandra Senes) impressed with fourteen hand-embroidered 19th century dress-shirts suspended from the ceiling. Each vintage piece bore an intricate travel-related motif associated with destinations as diverse as Lima and Inchmurrin.

To comment on the trade fair and its relevance for the younger end of market, Scoop is a boutique show centering on premium brands, but as we’ve noted before, denim and casualwear collections sit nicely alongside the more classic offerings. 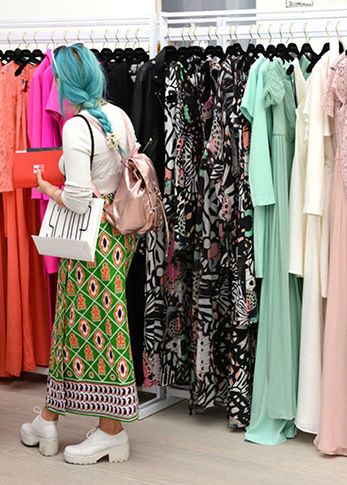