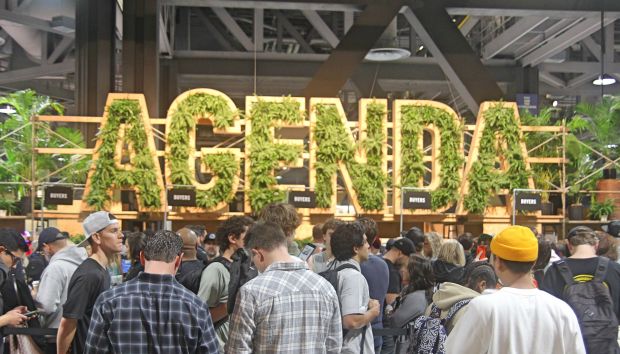 The Long Beach Agenda show is the crown jewel, the homecoming for Aaron Levant’s showcase of all things streetwear. And this particular Agenda is even more meaningful since a little birdie told us it’s a send off for founder Aaron Levant, off to more projects and successes in the future. 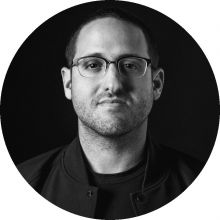 Thankfully, Levant is leaving his baby as a grown up show in its prime and this season was no exception. The newly redone entranceway replaces the tried and true light bulb encrusted Agenda sign with a new one done in fresh greenery. It appeared to be constructed of ferns. Still, one can’t help but think about the legalization of recreational marijuana that hit California on the first of the year, a notion that clearly crossed the minds of the sign’s designers and suits the skate, streetwear vibe to a tee. 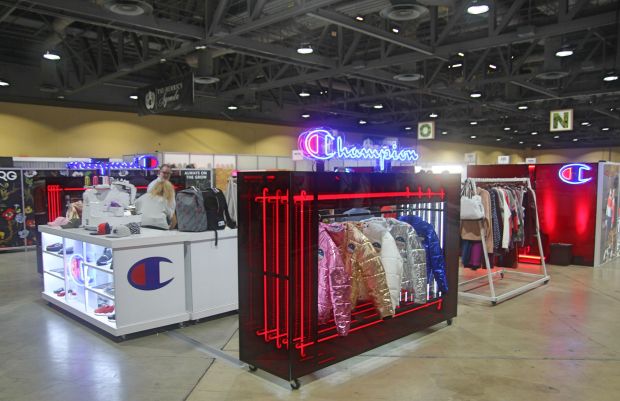 Any haze cleared away on the show floor, leaving every streetwear brand you need to know, big to small, skate to surf and so much in between. The big names showed up in force, the mainstays of this must see show. 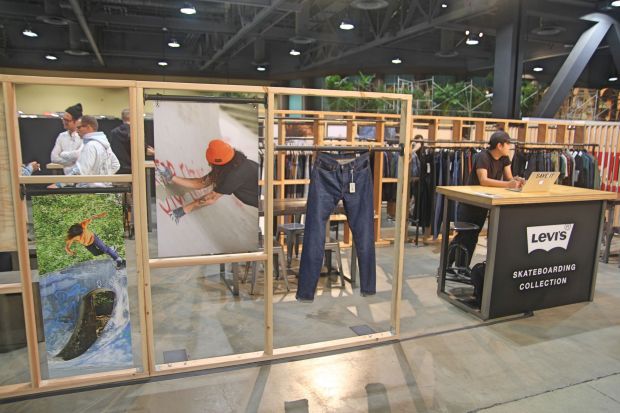 The sweet smell of breakfast batter and syrup wafted through the air of the Long Beach Convention Center. Sure enough, it was Vans, cooking up hot waffles, in celebration of their legendary waffle sole. Levi’s Skateboarding was there with its collection of White Oak denim. They were in good company alongside The Hundreds, Asics, Brixton, Fila, Lacoste and New Era to name only a handful. Good to see Dr. Martens keeping their heritage brand super relevant with a fusion collection that looks like a pair of Docs but feels like a pair of sneakers. For the retro at heart, the brand brought along their Factory Records homage with eyed boots in both New Order and Joy Division styles. 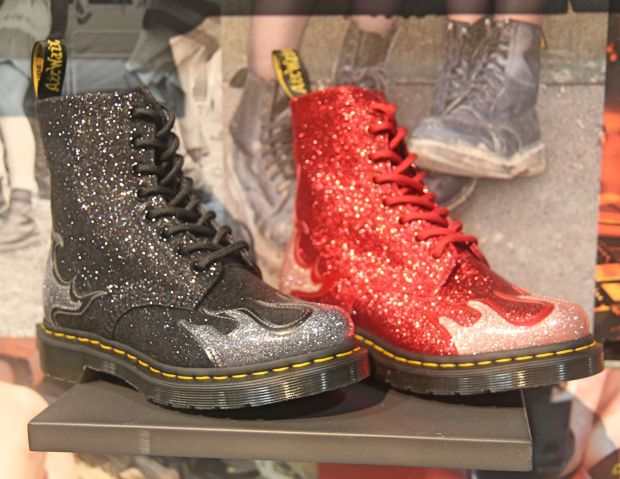 Favorite new and returning smaller brands included the likes of Tee Ink, an Aussie brand with women’s swimwear and men’s comfy tees. They brought along Maru the Dog, who appeared to be asleep in the booth but, we suspect, was ready to write orders. Fellow Down Under brand Business and Pleasure launched in the US last year with their collection of umbrellas, beach tents and cabanas. Born after the founders came upon a big collection of brand new, dead umbrella stock. It sold so well that they soon realized demand was exceeding product and so they began to produce their own wares. 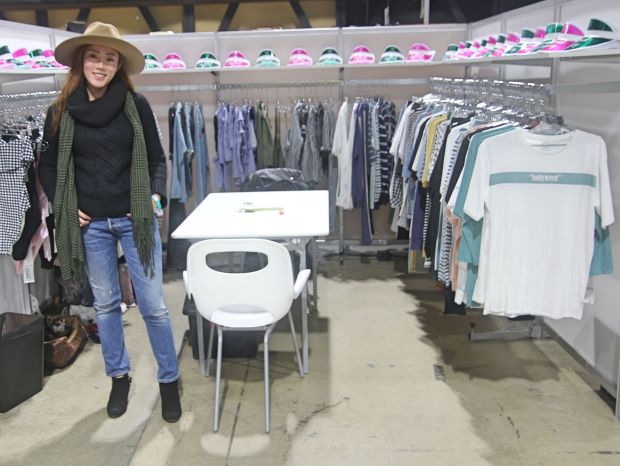 Photo: Douglas Cringean
Tee Ink with Maru the dog in the background 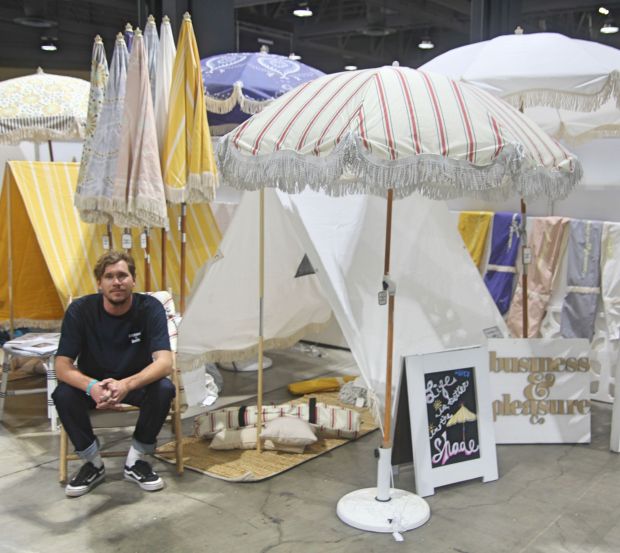 Graham Enterprises is a brother and sister team that co-sponsors Agenda, doing a lot of the signage and such for the show. But the brand also works up labels, custom goods, accessories and hang tags for other brands, all from their facilities nearby in Orange County. Rad Mfg, and Grim Squad shared a booth with their combined collections of infant, toddler and pre teen trucker hats and apparel. They say why not deck out your kids the way you, yourself, dress. 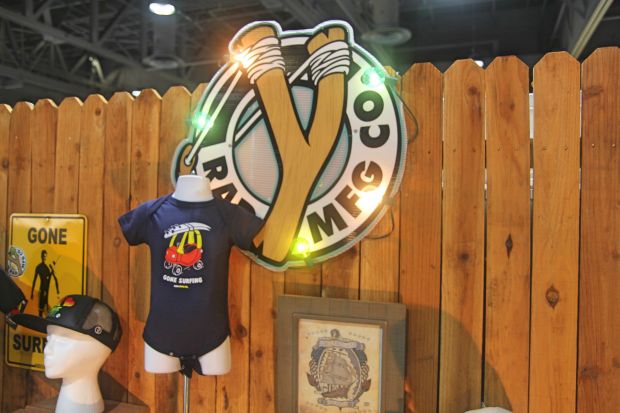 Merge4 started life making outerwear for other companies but now finds themselves in the business of creating cool socks. Collaborations with artists and athletes bring about socks celebrating bands like the Circle Jerks or Long Beach’s own Sublime. Skater Spidey De Montrond did some cool mechanical bamboo, striped selections that freed him from, as he noted, having to always buy girls socks or spend big on Paul Smith. With hand linked features, sturdy, comfortable construction and the promise of long wear, the socks also feature a little message woven inside. Sham Bags is another promising newbie. The little travel bag company is expanding to include school backpacks to their roster of TSA happy traveling packs. 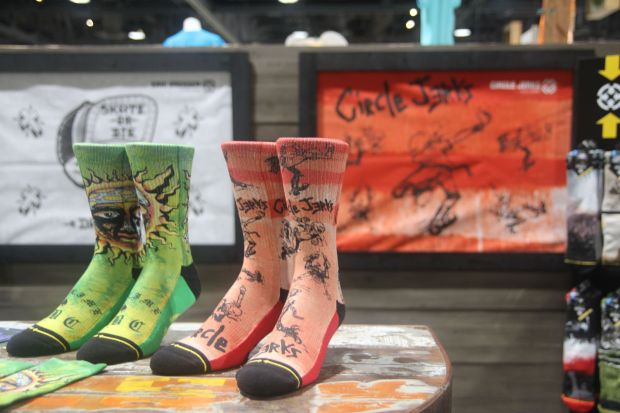 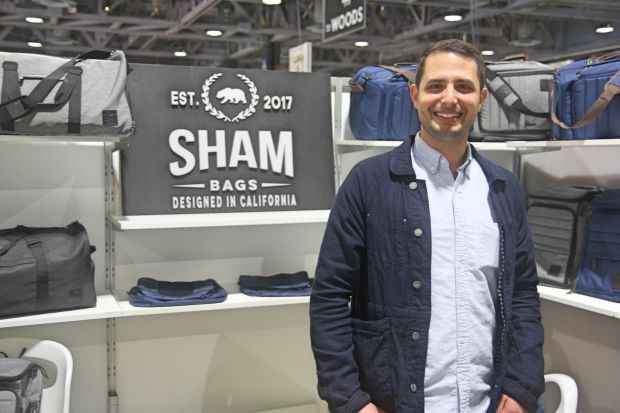 The circled assortment of hipster food trucks was still on site but there was a definite lack of the Agenda festival day this time around. We sense some changes in the air for this important, game changing show. Stay tuned. 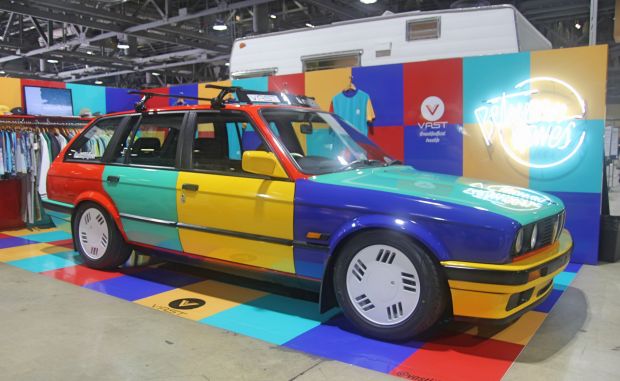 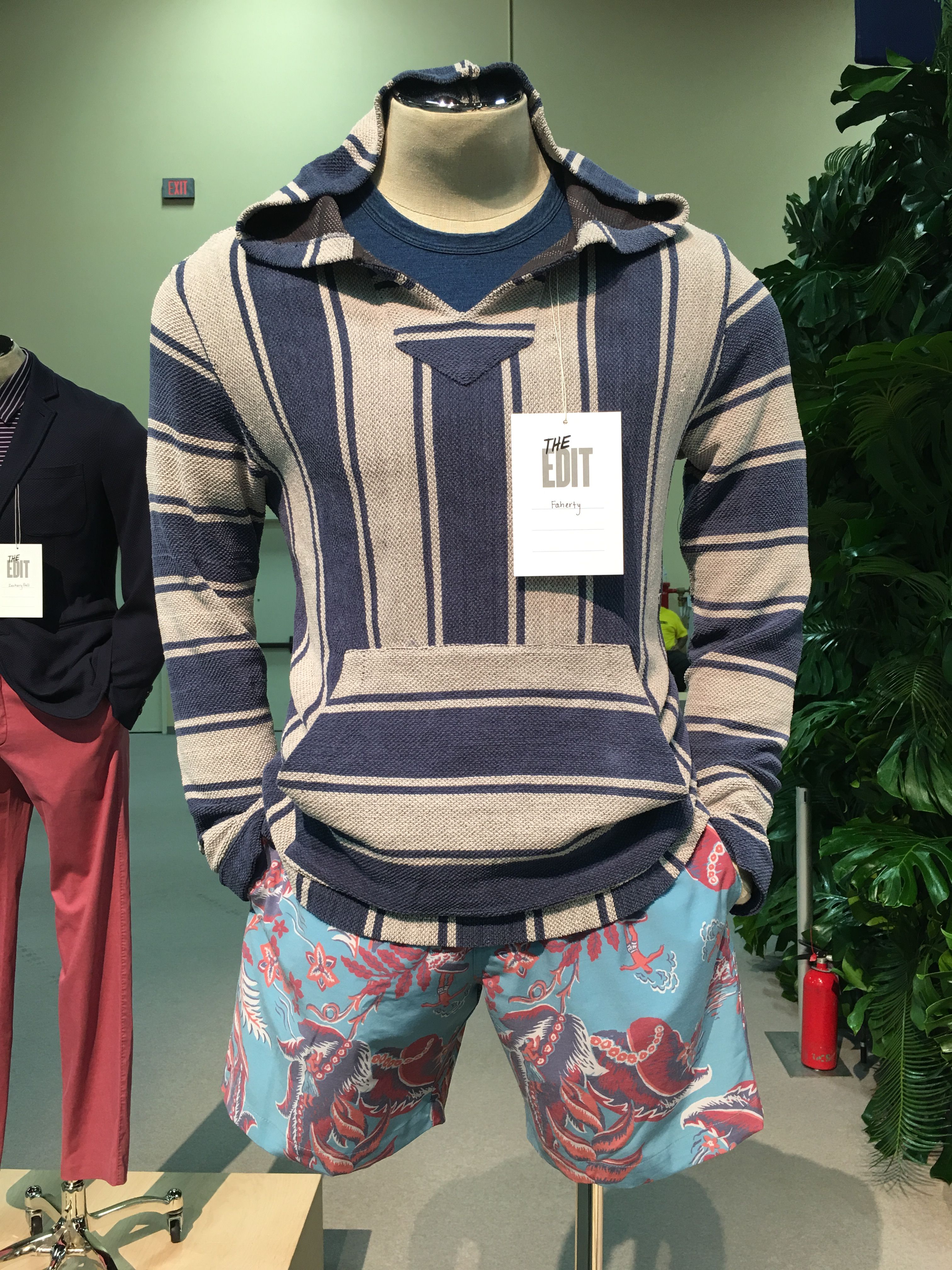 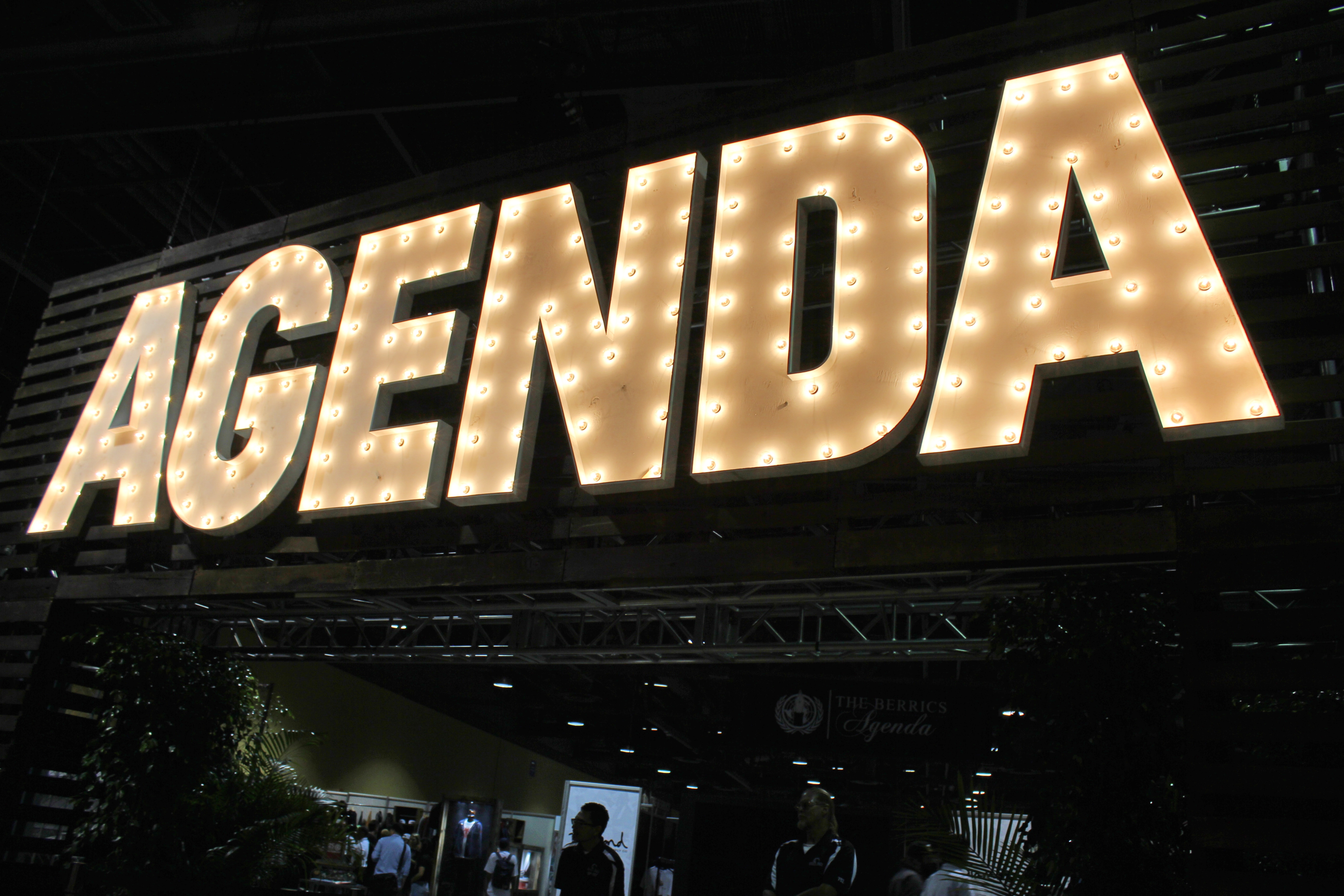 What you have missed at Agenda tradeshow 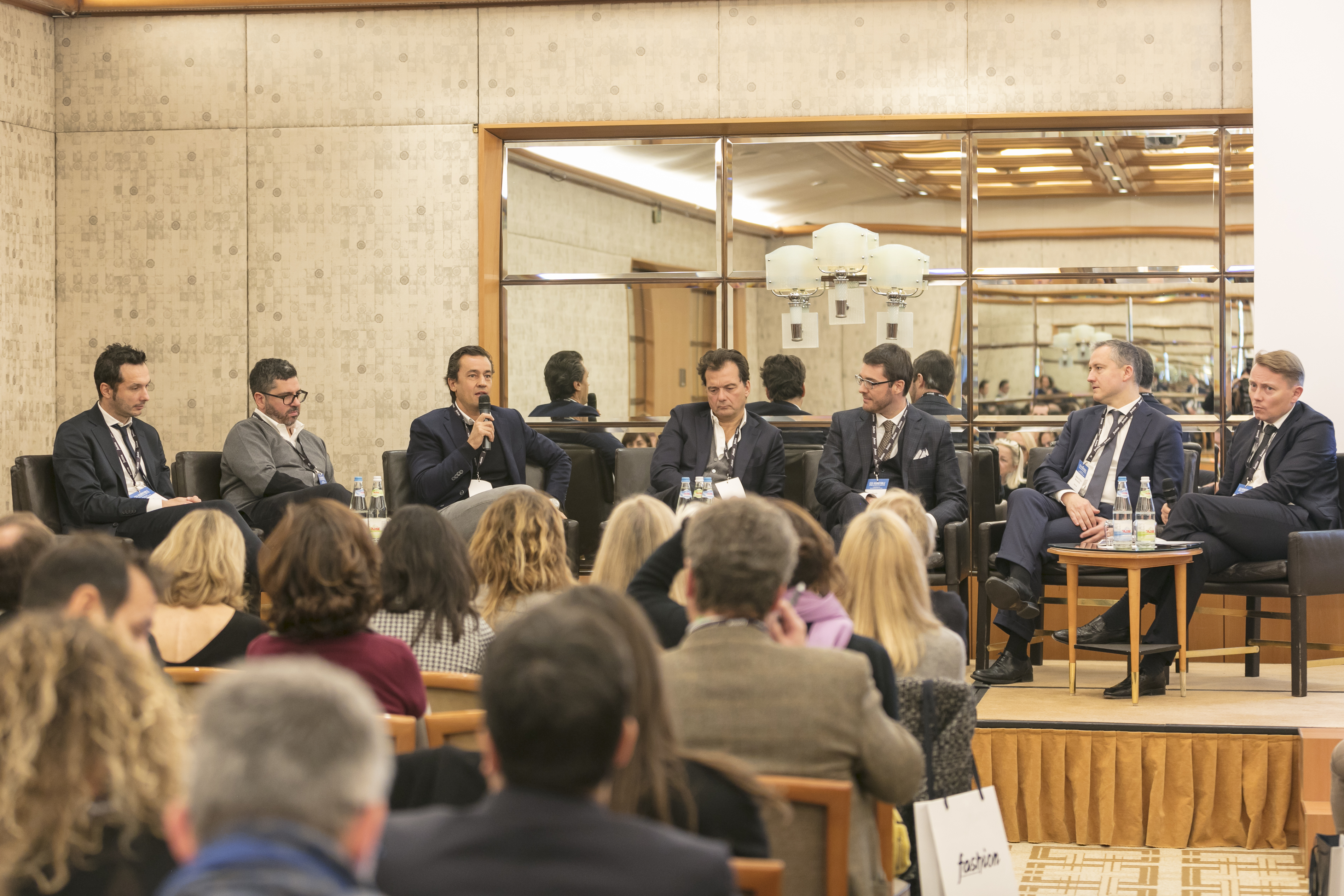