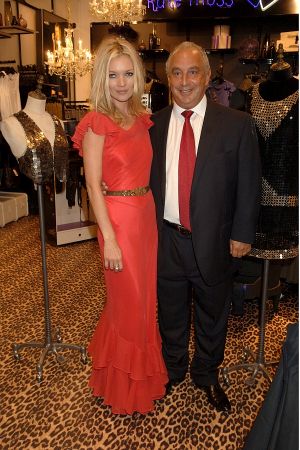 Most recently Kate Moss created a collection for Topshop three and a half years ago. Her official return is in full progress and she is currently designing the Spring/Summer 2014 collection that will be available from April 2014 at Topshop stores in 40 countries, on Topshop.com and at wholesale partners.

Sir Philip Green, founder of Topshop, comments: "I am thrilled that Kate Moss wants to work with TOPSHOP again. The very first collaboration with her was a lot of fun, and since then we have greatly missed her. Since the last collection with Kate in 2007, Topshop has expanded worldwide. It is now our aim to offer this new collection worldwide in over 40 countries where TOPSHOP is to be found, as well as in pop-up stores in selected department stores."

Kate Moss adds: “I've really missed being involved in such a design process, especially with the team at TOPSHOP. I am so excited to design a new collection that will bear my name. London is at the top of the fashion world and it feels right to me that I should return home to Topshop.”

Topshop owns 319 branches in the UK and 137 international franchise stores in more than 40 countries. The retailer has several independent flagship stores in the USA and shops in the Nordstrom department stores.