This is what you missed in Las Vegas

by N. Jayne Seward — August 24, 2015
The Las Vegas trade shows, which ran August 17 to 19, delivered an abundance of directional looks and new brands to help men get their fashion game on this Spring. Key shows including Project, MAGIC Marketplace, Pooltradeshow, Liberty Fairs, Capsule and Agenda offered everything from designer fashion to streetwear and lifestyle looks – and plenty of newness.

New territories to navigate
For attendees, there was plenty of new territory to navigate. UBM/Advanstar, who owns MAGIC Marketplace and Project, presented its shows held at the Mandalay Bay Convention Center across a more than mile long trade show floor. This season the trade show giant renamed several shows including Project Women’s (formerly ENK Vegas) and The Collective (formerly MAGIC Men’s).

In addition, its innovative Workroom space re-launched to showcase upcoming brands and Pooltradeshow returned to the main floor adjacent to Project Women’s offering buyers easier access to its artistic, emerging collections. “We accomplished what I set out to do two years ago which is to create the largest platform of men’s, women’s, designer, contemporary and advanced contemporary all under one roof and make it a seamless shopping experience,” says Tommy Fazio, President of UBM/Advanstar, Men’s. “We accomplished it for the first time this year. It’s a really exciting time,” he adds.

Vegas loves denim
Project also shined the spotlight on denim this season. The show, which includes denim brands such as Hudson Jeans, Diesel and AG Adriano Goldschmied, debuted its inspirational BLUE denim installation created in collaboration with ISKO. In addition, a panel discussion titled “Long Live Denim” provided a lively conversation about the state of the denim market.

The Tents at Project grew almost 20 percent this season and continued to offer an impressive selection of brands including Billy Reid, Faherty Brand, Tom Snyder, Matiere, Vince, Scott Langton, UDP and Costume N Costume. This season Fazio says the California lifestyle is a big trend and many brands are adding swimwear to their collections. “That’s how Californians live - always comfortable, but looking chic,” he explains. “You saw [a lot of] it on the runways this past season.” Newness, according to Fazio, is what retailers are looking for – especially for Spring. “Everyone wants what’s new, what’s happening, what’s fresh,” he says. 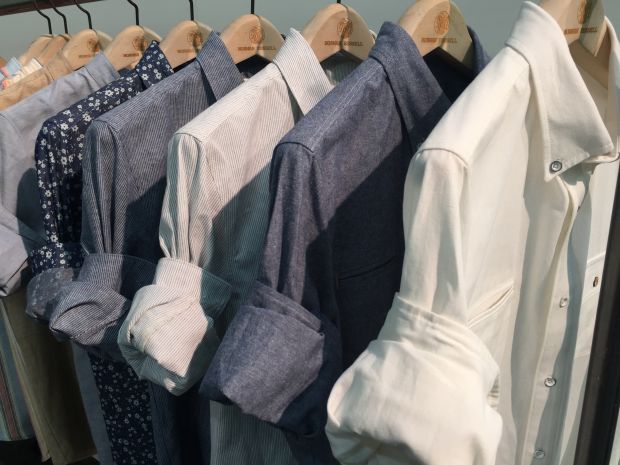 Shirtings at Norman Russell at the tents at project

Brave new menswear
At the Modern Assembly shows held at the Venetian’s Sands Expo Center, newness was also a key theme at Liberty Fairs, Capsule and Agenda. In fact, “A brave new order of menswear” is emerging according to Capsule Show Director Chris Corrado. Following a successful New York Fashion Week: Men’s and the growing popularity of fashion on social media, men are becoming more experimental, and it’s inspiring creativity in the marketplace. “We are turning a corner aesthetically as a menswear industry. Guys want to look like they know what they’re doing. They want to dress the part. They want to be creatively sophisticated. They want to look unique,” Corrado explains. “They’re more adventurous than they were before. There is edgier stuff on the market that guys are actually willing to wear,” he adds.

Capsule, which continues to evolve, offered men’s as well as a section devoted womenswear from top international and innovative upcoming brands. This season Capsule created an area called Le Nouveau to highlight those who are pushing the envelope on design and newness in the marketplace. “I think we got more aggressive this season with making sure we’re putting our own curator stamp on the market and saying, ‘hey, we’re deeply engrained in this progressive movement of menswear - we know it best,’” says Corrado. “We have the ability to promote and support and champion these brands in a way that can really benefit them.”
Within LeNouveau, the “New America” section featured upcoming L.A.-based brands 424, Second/Layer, Homme Boy, Rhude and Blackfist. An area titled “Perspective” included a selection of international innovators curated by Darren Skey who is Head of Menswear at Harvey Nichols. Capsule also devoted a section to top international showroom Tomorrow who works with many aspirational brands.

Heritage meets modernity
Liberty Fairs continued to deliver an exciting line-up and had one of its most successful seasons yet according to Sharifa Murdock and Stephanie Seeley, Partners at Liberty Fairs. “The show has been fantastic – most certainly our best yet,” says Seeley. “The energy is great. Our brand mix this season is right on. We launched some new amazing initiatives,” she adds. 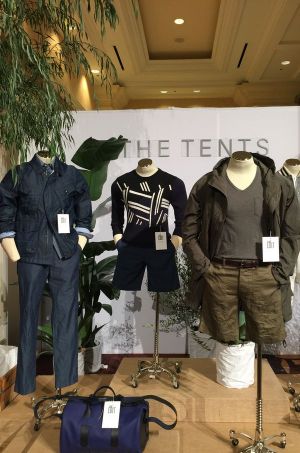 The Edit at The Tents at Project
“Our focus each season is to be better, to be servicing the industry in a better way whether it’s [offering] more of the best brands that are out there for the buyers or helping the buyers navigate the show floor.” Liberty merchandised the show to include key categories ranging from tried and true heritage brands to modern sportswear, streetwear, contemporary and lifestyle collections. The line-up included Levi’s Made & Crafted, McQ Alexander McQueen, Stone Island, Toms, G-Star RAW, John Varvatos, Rolla’s Jeans, Original Penguin, Zanerobe and CWST.

A new initiative this season called “The Studios” gave five digital creatives their own on-site studio to create original content with Liberty exhibitors. The show also added “Freedom Hall,” a section curated by Quiji Theodore of The Brooklyn Circus and “Poggy’s World,” an installation curated by United Arrows & Sons Creative Director Motofumi “Poggy” Kogi. “It’s been amazing that Poggy has been a big fan of Liberty Fairs and the aesthetic and what we’re doing here, so for him to show his picks and the United Arrows collection for the first time in the U.S. with us has been a very big honor,” says Seeley.

Streetwear went back to basic
In its sixth season, Agenda is still growing and adapting to the changing needs of the market. The show is mostly focused on street, sneaker and lifestyle brands versus its Long Beach, California show, which is more surf/skate-centric. “That [streetwear] part of the market is still exciting and growing at a rapid pace,” says Agenda Founder Aaron Levant. “It’s going a lot of different directions. There is a lot of high-end streetwear, there’s a lot of fast fashion streetwear – it’s spreading its tentacles in a million different directions.”

This season Agenda went back to basics and focused on reformatting its booths to create a standardized look. “We really wanted to bring it back to what Agenda was known for in the beginning, being very simplistic - just about product,” says Levant. “So that was a big step for us.” Key brands at the show included lifestyle collections such as Herschel Supply Co., New Balance, Reebok, LRG Clothing Co. and Diamond Supply Co. as well as directional brands such as Dope, Black Kaviar and Vie-Riche. More international brands exhibited this season including Pestle & Mortar Clothing from the Philippines and Long Clothing from the UK.

“We’re seeing some international brands trying to break into the U.S. market,” says Levant. The show is still 85-90 percent domestic brands, but he expects international exhibitors to increase over the next few years. “Every season we get hundreds and hundreds of new streetwear brands that are coming out of nowhere,” he says. “Not all of them make it, that’s a whole other story, but there is never a shortage of new exciting concepts and brands coming out on the market.”