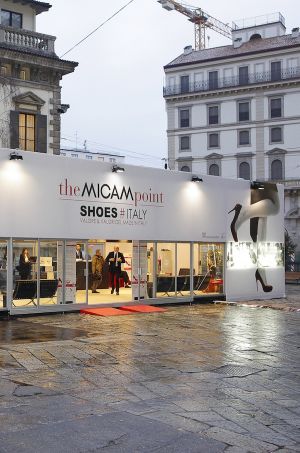 by Maria Cristina Pavarini — March 27, 2014
The third edition of theMICAMshanghai held at the Shanghai Exhibition Center from 24 to 26 March has registered 5,000 visitors, a slight increase compared to the previous edition. Chinese and international visitors, fashion professionals, buyers and media attended the around 250 booths of brands from 12 countries with a substantial increase in the number of international companies from Brazil, France, Portugal, Spain, Turkey and the UK.

The last two editions of theMICAMshanghai in April and October 2013 welcomed 500 exhibitors from 20 different countries and 11,000 visitors.

Mr. Cleto Sagripanti, Chairman of theMICAM expressed his confidence and excitement for this March show: “TheMICAMshanghai represents not only a strategic and unique business opportunity for those Italian shoe brands to enter the Chinese market, but also a consolidated platform to meet with local buyers, retailers and department stores.”

Mr. Stefano Beltrame, the newly appointed Consul General of Italy in Shanghai, attended theMICAMshanghai for the first time: “The MICAM Shanghai – now at its third edition – proves the strong commitment of its organizers towards China and the success of this format for promotion of high end quality footwear. Nearly 200 companies from Italy and other 11 countries participated in theMICAMshanghai. Made in Italy is still the core of MICAM Shanghai. Italy, in 2013, confirms itself as first exporter of footwear in China with 551.6 million dollars with an increase of +16.75% on 2012. Italy holds 28.19% share of the overall footwear market in China”.

In order to facilitate B2B opportunities, the show’s organization has launched theMICAMshanghai Matching for this edition of the show. A team of coordinators has worked to select buyers according to requisites such as type of shoes or leather accessories, selling price, distribution channels and match them with the target exhibitors. Over 500 business meetings have been pre-arranged with qualified Chinese and international buyers, who have been invited from South Korea, Australia, Singapore, Indonesia, Malaysia and the Philippines. A large delegation of local buyers came from the North of China, after the promotional show was organized at the cities of Harbin and Dalian (besides Beijing, Shanghai, Hong Kong and Chengdu) a month ago, attracting wide attention.

The third edition of theMICAMshanghai offered learning opportunities to all exhibitors, buyers and visitors, through its rich program of seminars held by professional domestic and international experts. On Tuesday, 25 March, the first international e-commerce forum on footwear was organized in collaboration with TaoBao, China’s leading e-commerce platform with around 90% market share.

E-commerce is a hot topic on the agenda at theMICAMshanghai and the organizers have shown special determination in pursuing new business opportunities for exhibiting brands in this area. During the opening ceremony, the Chairman of theMICAM signed a Memorandum of Understanding with IFG, represented by General Manager William Wong, one of the largest Chinese buyers of imported footwear and leather accessories, also winner of “Best Buyer Award” at theMICAM in Milan last September. The MoU is a strategic cooperation agreement, which sets the foundation to build up an e-commerce platform for imported shoes and leather goods in China. The brands will be selected during theMICAMshanghai.