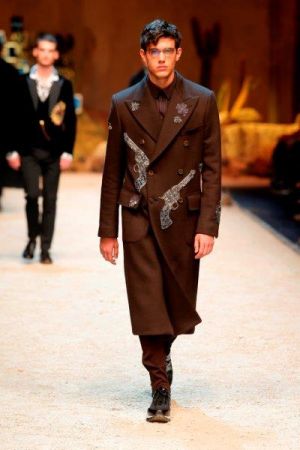 The new men in Milan: fighter or dreamer?

Milan menswear week held from 15 to 19 January 2016, presented designer collections and novelties for f/w 2016/2017. Tomorrow’s men’s wardrobe reflects an idealized, though clear vision of the present state of the art in society and fashion.

Urban guerrillas
Fighting to survive the urban jungle - and its many unknown and unpredictable menaces - is a must for contemporary men even if designers added an abundant dose of colors (Ports 1961, DSquared2), juxtaposed to loads of black and blue redesigned urban styles like bombers and leather motorbike jackets (Diesel Black Gold, Ermanno Scervino). 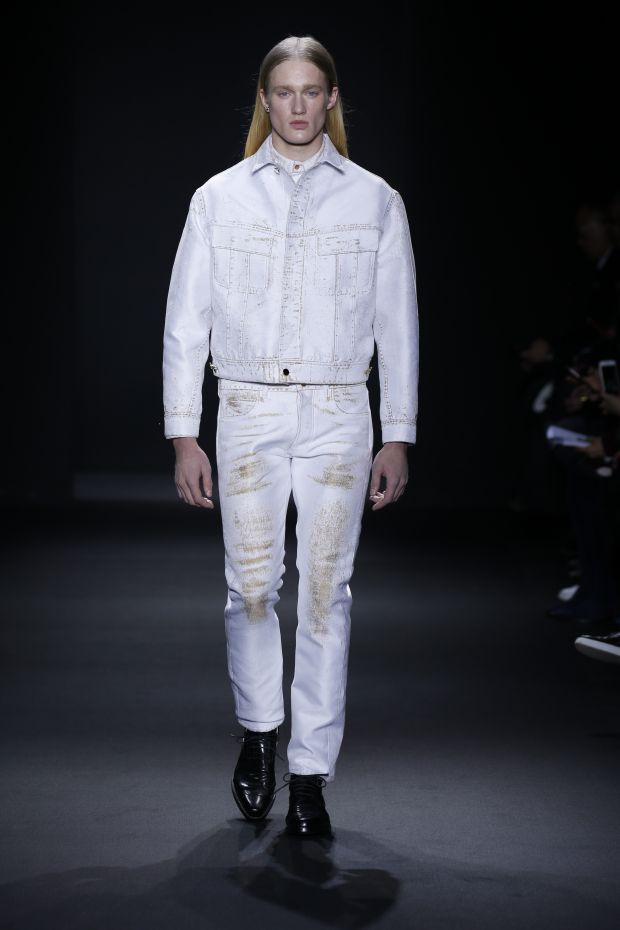 
Trendy fighters
Thom Browne’s Moncler Gamme Bleu presented a wardrobe with creative camouflage effects in colorful and light reflecting accents. Most controversial was the designer’s choice to present only masked men that at the end of the show sat inside a semitransparent cube where colorful petals exploded. His mantra might be interpreted as “make fashion not war” referring to the recent violence involving Paris. 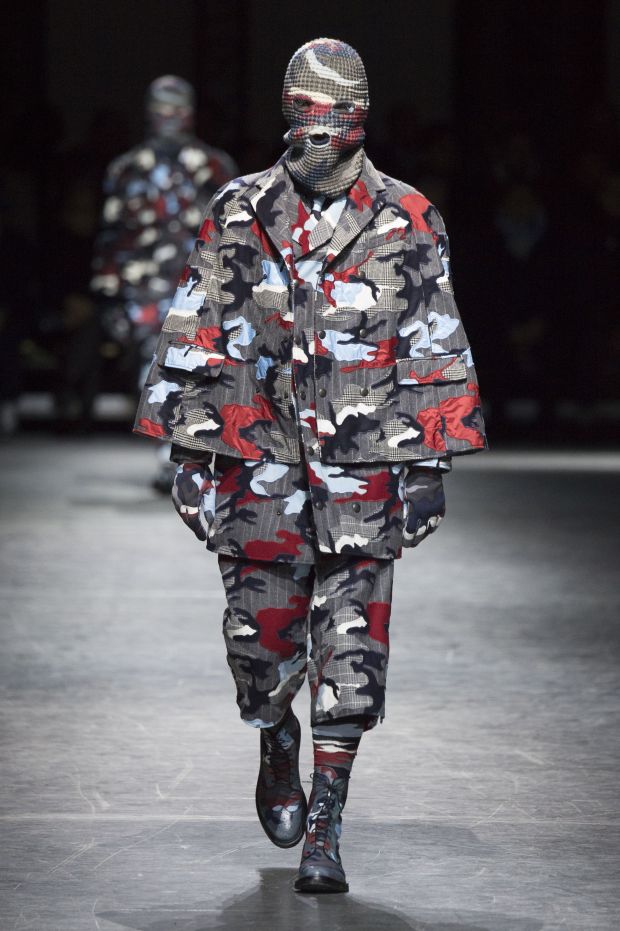 
Softer silhouettes
Silhouettes appeared mostly enlarged, softened and longer, contrasting past seasons where most outfits came in a tight-fit. A must many designers opted for were capes in different materials such as wool, nylon and leather as presented by Diesel Black Gold and DSquared2. Calvin Klein opted for coats and parkas with metallic coatings and linings, combined with aged white jeans and jackets revealing lurex yarns on their surface. 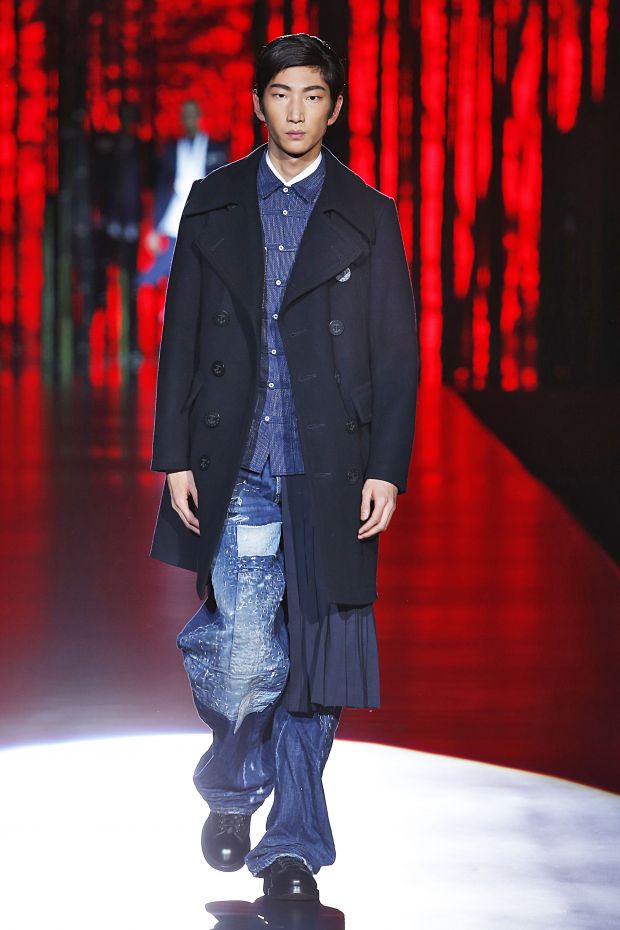 
Urban cowboys are back
Cowboy references as presented by à-la-Siciliana and by Dolce&Gabbana or by Antonio Marras reinterpreted according to his Sardinian origins with lots of patched denim trousers and overalls,  carrying embroideries and appliques of guns, all reminding of the fact that justice needs to be done – let’s hope not many will use their weapons.

Also Richmond’s collection, now designed by entrepreneur Saverio Moschillo, opted for urban warriors wearing leather perfectos, colorful bombers and crafted jeans embellished with studs, laser decors and breakings. Duvetica played with cross-over effects by mixing down jackets with woolen outer shells and knitwear items with down padding elements, still offering down jackets mimicking herringbone and Harris-tweed, reproduced in nylon jacquard fabrics. Dondup reinvented coats, bombers and blazers in new transversal material mixes. Their reversible field jacket has a velvet collar on one side and a hairy camouflage surface needled fabric made of tartan on its other side. 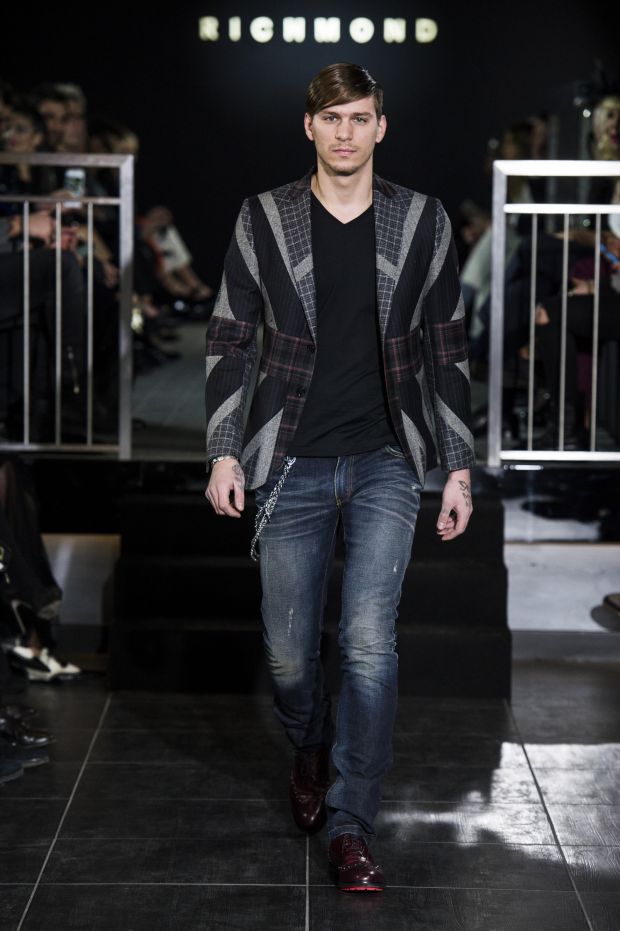 
Dreamers are back
Another attitude – and state of mind – characterizing other collections is pervaded by some sort of desire to escape reality through emotions, memories and love for nature as presented, for instance, by Etro, Gucci and Ports 1961. Despite the fact that each of them hit a different chord, they all opted for rich embellishments, prints and clashing decors. Etro took inspiration from Walt Whitman and David Thoureau reviving their sense of poetry and love for nature through vegetal element prints and comfy silhouettes. Gucci, on the other hand, returns to memories and past clichés and recreates fancy mixes made of sequined or embroidered appliques, Snoopy, Woodstock and abstract pattern prints enriched with fishes, bees and flower decors. Ports 1961 opted for China inspired silk bombers and star motives. 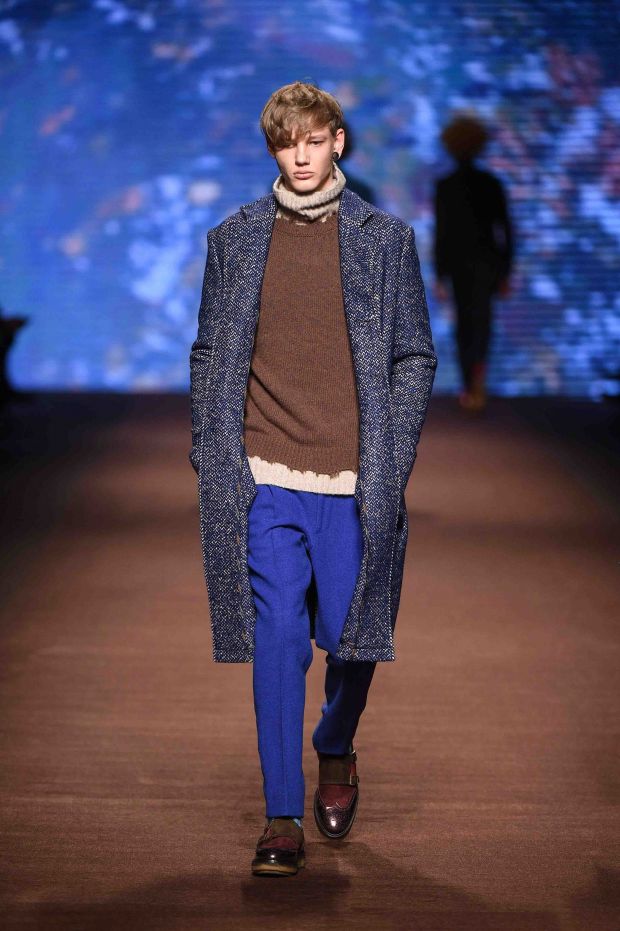 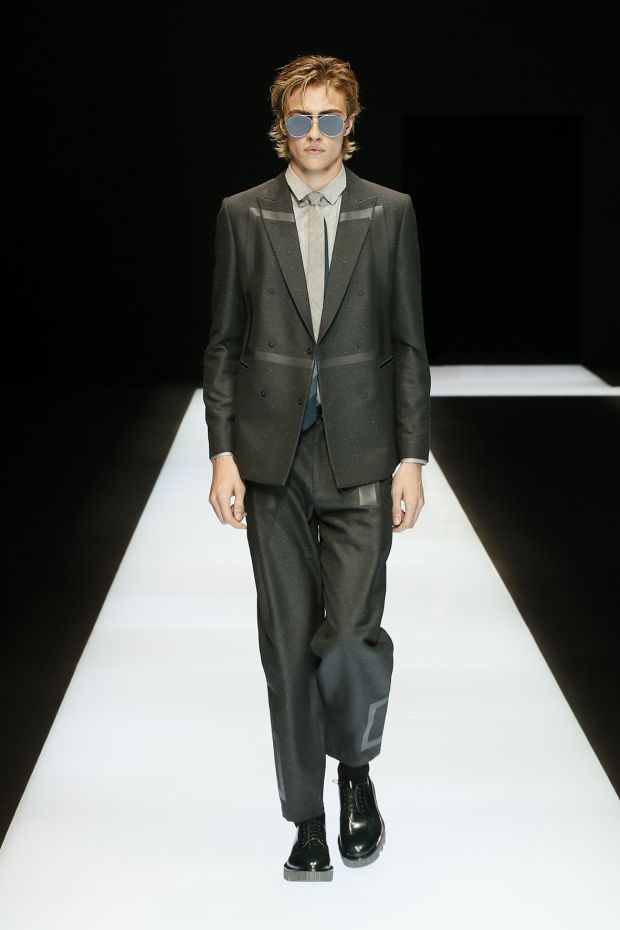 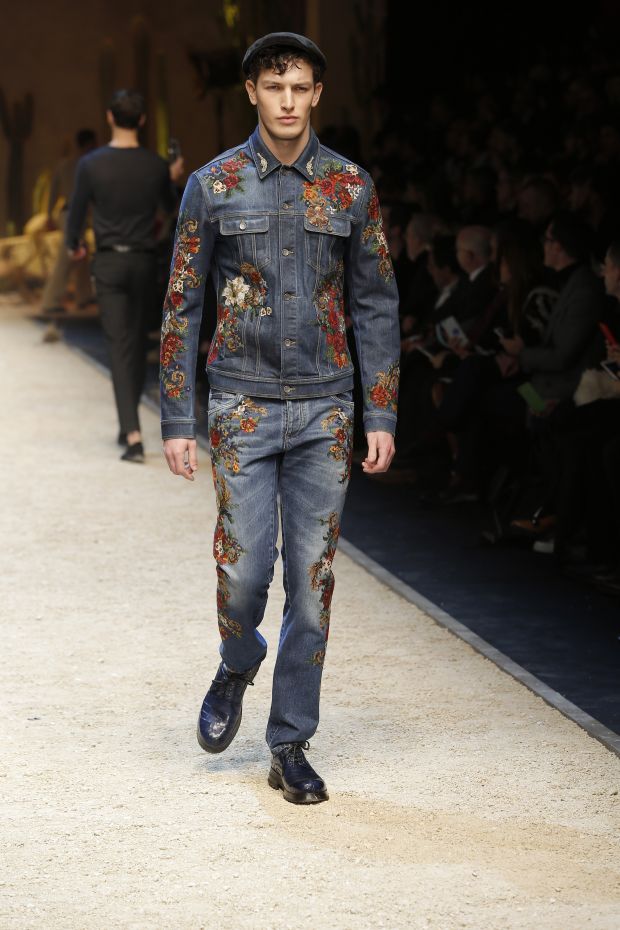 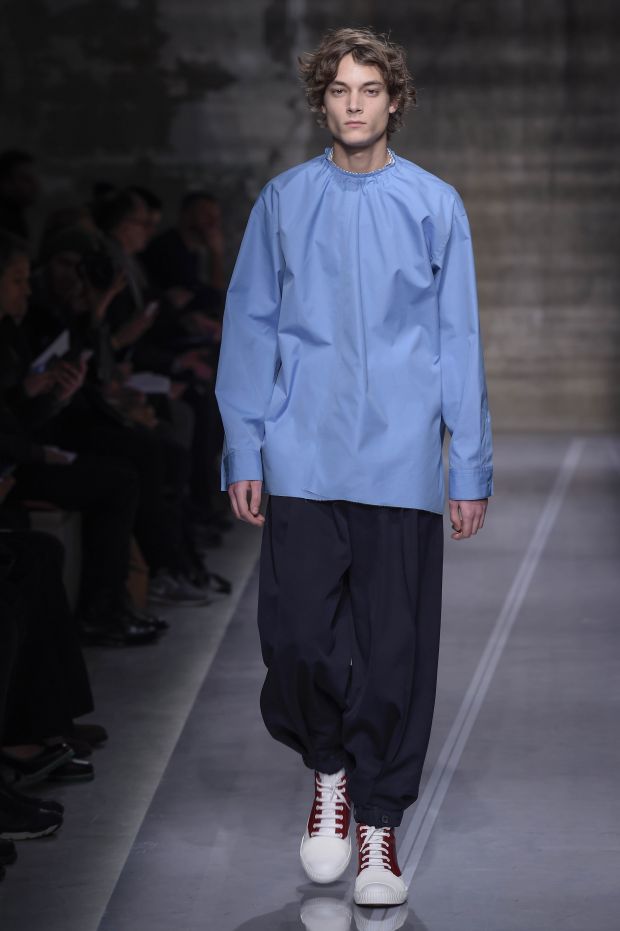 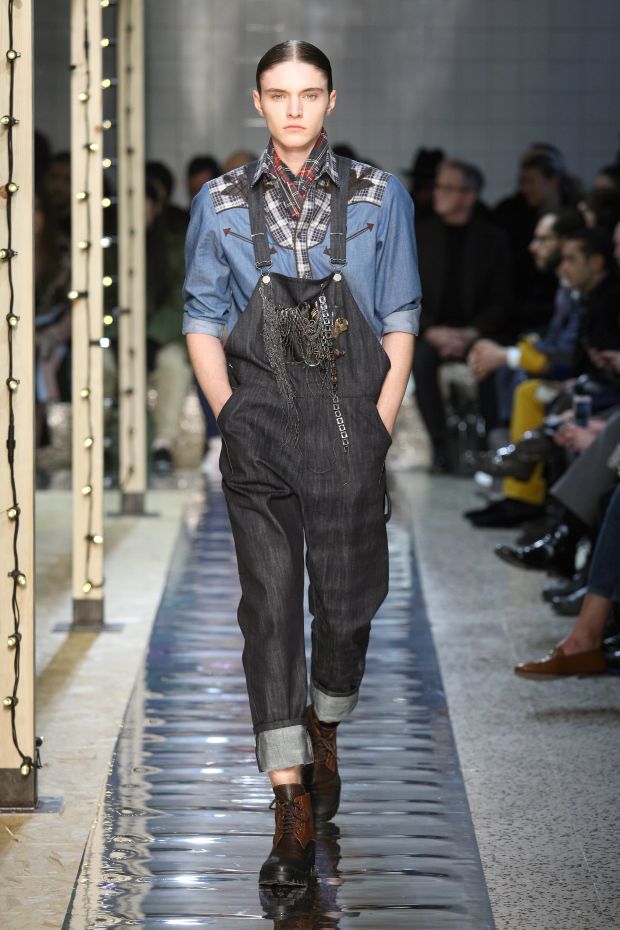 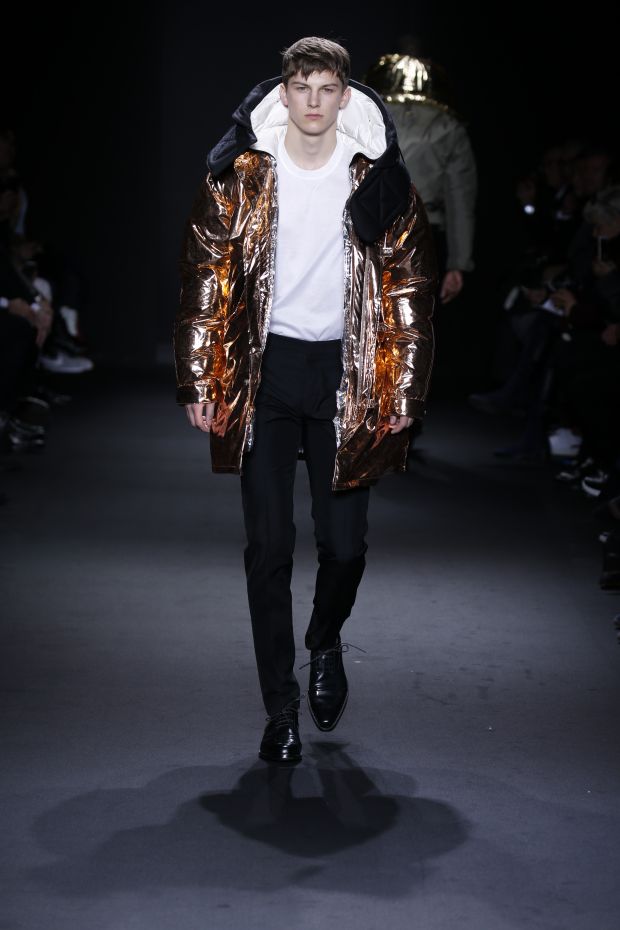