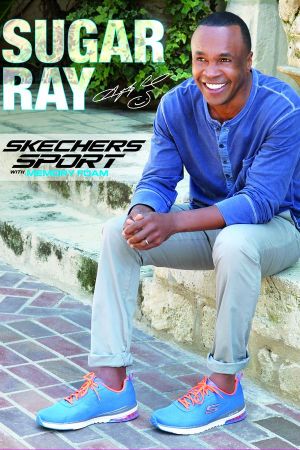 The comeback of Skechers: Oops, they did it again

— August 06, 2015
Throughout the 20th century, sneakers were decidedly un-sexy. They were seen either at step aerobics or on skirt-suit wearing businesswomen, waddling from the subway to the office where they’d immediately change into stilettos under their desks, thank you. That’s until the birth of Skechers. In 1992, the innovative new shoe brand somehow cajoled pop tarts like Britney Spears and Christina Aguilera to pair their clunky lace up Skechers sneaks with come-hither transparent shirts and schoolgirl pouts. And that’s all it took for Skechers to corner the market with much sought after sex appeal and comfort in one shoe.
And then the 21st century dawned. Britney shaved all of her hair off, companies like Crocs ran away with the comfort footwear flag and Skechers introduced the Shape-Up, an awkward, strangely designed shoe that promised weight loss and toning but was proven, alas, to do nothing of the sort. A bit later, they launched Bobs, similar to Toms except, well, actually, exactly like Toms and not in a good way.

The Skechers party might very well have been over, except that the little 23 year old company-that-could knew its royal birthright was still there, ripe for the taking. And, by hook or by crook, Skechers is back and ready to seize power once again. The brand is on to something really important. They pair reasonable pricing and brand spanking new styling with hot colors and on-point technology and, like in those bygone days, massive star power. Skechers is being touted now by Demi Lavato, Ringo Starr and Sugar Ray Leonard. 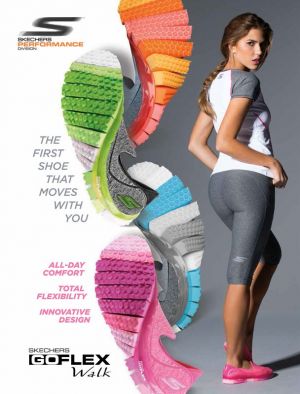 Skechers GOFlex swirl ad
“Our domestic and international growth remain strong with increases in the second quarter of 30 percent in the United States and 60 percent internationally over the same period last year,” says the brand’s proud CFO and COO David Weinberg. “Truly, at no other time have so many styles resonated with consumers. This has resulted in Skechers becoming the number one walking brand in the United States, and moving to the number two Athletic Footwear Brand in the United States, past some serious competition. And we are seeing this growth and similar styles in every market where Skechers is available across the Americas, Europe, Asia, Middle East and Africa.”

Though the aggressive introduction of styles like GOwalk, GOFlex, Sport, Star Wars for Skechers and Twinkle Toes has created double digit growth in the US during the first two quarters of 2015, Skechers now turns its attention to international sales, expecting that to soon become about half of total sales. To that end, the company is looking at new markets like the Czech Repubublic and Romania plus expanding business in Latin America.

“To keep up with the demand for our brand, we have added additional equipment upgrades within our 1.8 million square foot domestic distribution center,” Weinberg tells us. “To meet the growing demand in Europe, we’ve updated the automation of our equipment and are now undergoing our second phase of expansion, which will result in more capacity and increased efficiencies with more than one million square feet of distribution center space.”

Allow us to say it. Oops, they did it again.