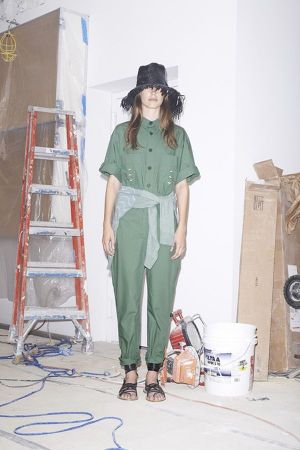 “The Fat Lady Sings” at Band of Outsiders

— July 22, 2015
In May, the beloved CFDA/Vogue Fashion Fund nominee and cult-like men’s and women’s apparel brand, Band of Outsiders, quietly, and without ceremony, closed its doors. What began as lay offs in early May led to the departure of long time higher ups like Nicole Cari, the brand’s VP of marketing and communications and soon, the cancellation of all fall wholesale orders. Now, the stores are closed, the website sits blank and, until recently, silence and refusals to comment ended up speaking volumes.

Former talent agent, turned designer, Scott Sternberg founded Band of Outsiders a little over a decade ago, developing an obsessed celebrity/fashion insider following for his men’s ties and shirting favored by the likes of Jason Schwartzman and Azaiz Ansari. Within a few years, Sternberg began a women’s line and the rest is fashion history. The preppy look has been a perennial favorite among everyday people, Hollywood costume designers and style’s elite name-droppers.

Three years after introducing womenswear, Sternberg took BoO to the next level, working on varying price points and an even wider range of products. In 2010, the brand was taking in about $12 million in sales so in 2014, Sternberg obtained an outside investment and began opening up standalone stores in Tokyo and New York.

The future seemed bright but cash flow problems soon prevented further growth and appears to have signaled the end of the much-loved brand. After a silence of quite a few weeks, finally last month, Sternberg tweeted a thank you message to his followers:

“The proverbial Fat Lady sings, at least for me and my time here at Band. I can't really comment on the future of the brand as that's out of my hands at this point, but I do want to say thanks to all of the Band fans out there who embraced and supported our brand and clothes over the years, and my employees and partners who dedicated so much energy and enthusiasm. The store should be open for at least another week so, like, go buy something cute. And enjoy it. That was the whole point of this thing after all.”