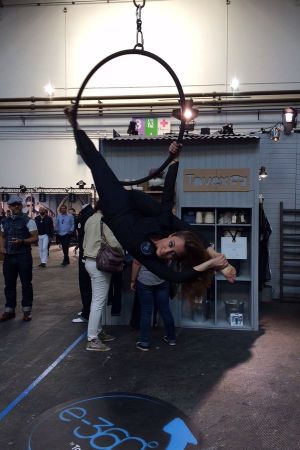 Impression of a trade show stand by Tavex
Stories

by Maria Cristina Pavarini — June 09, 2015
The former Grupo Tavex SA, global denim and workwear fabric manufacturer born from a merging of Santista and Tavex denim specialists in 2006, has recently changed its ownership assets. The group was officially split among three owners with the aim for each to focus on specific geographical market areas.

Southern American operations of the former Grupo Tavex group remain with the previous owner of the conglomerate, Camargo Correa, though the group changed its name to Santista Jeanswear.

Northern American and Mexican operations were acquired by jeanswear manufacturer Mexican Siete Leguas. They will continue producing denim fabrics and will continue to use the Tavex brand name.

The German investment company Aurelius Group acquired Tavex Group’s European operations. The acquired entity has changed name and has become Tavex Europe and will produce high-quality denim fabrics under the name Tavex for top quality jeans manufacturers in Southern and Central Europe. Focus of Tavex Europe will continue to be innovation, sustainability and new developments. All business units, previously owned by Tavex in Europe, are now under the property of Aurelius – among them are also the former group’s productive plants in Morocco.

In 2014, the European division of the group generated revenues of 45€ million through its 580 employees. The main headquarters of Tavex’s European operations are in Bergara, Spain. The central logistics center is likewise located in Spain. Their productive facility is located in Settat, Morocco, and has a productive capacity of more than 17 million meters of fabric per year.