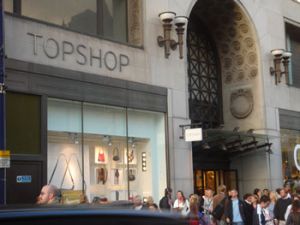 According to The Observer newspaper in the UK, this coincides with a flurry of other resignations within the company over the past few months: its finance director has recently left and the marketing director is due to leave at the end of the month. It was just last October that the store’s previous brand director, Jane Shepherdson, made her own surprise exit.

Fenn and Sheperdson dramatically altered the course of the British high-street chain - which just 15 years ago was in the fashion backwaters – pulling it to the fore as a shopping destination and major retail success renowned around the world.

However, as well as recent unrest within the company employees, Topshop was also recently forced to destroy almost 2,000 dresses and pay thousands of pounds in legal costs when they were accused of copying a design by the fashion house Chloe.

Despite a bumpy past month, trading at the store remains strong, though all eyes will remain on the company’s financial performance which is normally announced in October. Owner of Topshop Sir Phillip Green, who also counts BHS, Miss Selfridge, Dorothy Perkins and Burton in his stable, has so far refused to comment on the resignation. It is rumored that Fenn found it difficult to work with the billionaire retail mogul. Joint managing director Mary Homer will remain with the company.