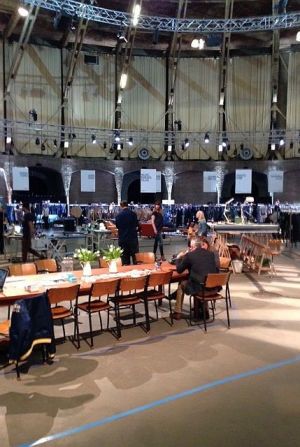 At the Kingpins show in Westergasfabriek
Stories

by Maria Cristina Pavarini — May 09, 2014
Right after the Amsterdam debut from May 7 to 8, 2014, trade show founder Andrew Olah announced that there will be a follow-up edition of Kingpins Amsterdam in October (28 to 29), once again taking place on the grounds of Westergasfabriek.

The first edition of the Kingpins show set the go for a series of events taking place in the Dutch capital from May 7-10, 2014. They are all focused on denim and jeans, and part of the Amsterdam Denim Days initiative to be held both at Westergasfabriek and through the city’s streets and shops, involving both insiders and consumers (stay tuned on our website for further reports and updates).

No final results/visitor numbers are available yet, but the Kingpins show was very lively and the atmosphere surrounding it very optimistic, creative and busy. The event presented 40 top quality denim, trimming and fiber manufacturers and finishers, among them names such as Bossa Denim, Candiani Denim, Denim Valley by Royo, Orta Anadolu, Tavex and Textil Santanderina. Other exhibitors included Invista, e3 and Martelli Lavorazioni Tessili and specialized denim and fashion schools from the Netherlands.

Visitors could only access the event upon invitation by exhibitors and after final approval of the show’s organization. Most visitors came from the Netherlands and other Northern European countries. Very few were from Southern Europe.

The Westergasfabriek, a vintage industrial circular building, provided a unique atmosphere as well as the friendly and - somehow - intimate mood, suiting the denim insiders’ attitude.

The two-day program of the show included also a series of conferences and events. One of them was the round table “WTF is Premium Denim?” focused on what’s next in the future of premium denim and how that can match the pursuit for top quality products, exclusivity, environmental issues and a modern consumer and retail approach. The round table was attended by Andrew Olah (founder Kingpins), Alberto Candiani, (global manager of Candiani Denim), Jason Denham (founder of Denham), Panos Sofianos (creative director Denim Valley by Tejidos Royo) and Maria Cristina Pavarini (senior features editor, Sportswear International).

Jean Hegedus of Invista presented the results of a new consumer study carried out by Invista, showcasing how the modern consumer evaluates jeans. A major result was how young consumers are no longer considering denim as a fashion trend, but as a regular component of their wardrobe. Also interesting was the fact that out of the 3.000 international consumers interviewed, the Dutch own the most denims per capita (about 11 pair each).

Another round table dealt with sustainable cotton and involved Patrick Laine, (Chief Executive of BCI), Naomi Stevens (Global Head of Acceptance for Seeds at Bayer CropScience and e3), and Liesl Truscott (director of Farm Engagement of Textile Exchange).

The October 2014 edition of Kingpins Amsterdam will also stage the first Global Denim Awards in collaboration with HTNK, the Amsterdam-based fashion recruitment and consultancy firm, and the House of Denim foundation, a platform for craftsmanship and innovation in the denim industry. The award event will be sponsored by e3 cotton and will involve about 7-8 young talented denim designers from around the globe who will create capsule collections in collaboration with global denim mills. Contestants shall focus on design, innovation and sustainability and will present their collections during a catwalk show. A jury of specialized denim insiders will select and award the best collections.

The Kingpins show was founded by Andrew Olah in 2004. After New York and Los Angeles, the denim trade show has held events in Hong Kong before hitting Europe with its first Amsterdam edition this May.