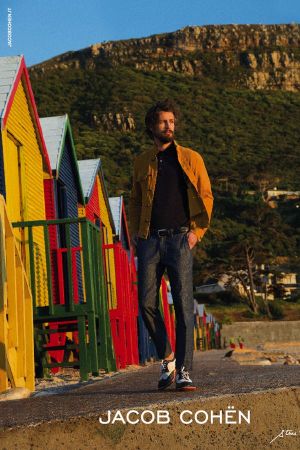 by Maria Cristina Pavarini — February 27, 2014
The latest SS14 ad campaign for Jacob Cohen was shot by the US photographer Steve McCurry, part of the Magnum agency and correspondent for the National Geographic. During his countless worldwide journeys he took images in Pakistan and Afghanistan before the Russian invasion and other international conflicts such as the war between Iran and Iraq, as well as the conflicts in Beirut, Cambodia, the Philippines, Afghanistan and the Gulf War. During this last conflict he photographed the Afghan girl, whose picture has become one of the most famous photographs in the world.

Marco Tiburzi, Marketing Manager for Jacob Cohen commented: “In Jacob Cohen’s SS14 Campaign, the voyage becomes a ‘journey’, in the most authentic meaning of the word, which effectively joins the concepts of ‘travelling’ and acquiring ‘life experiences’. For this reason, we selected Magnum’s master photographer Steve McCurry, one of few photographers in the world who has the ability to capture in a snapshot their characters’ experiences, as well as context, colours and lights. Choosing McCurry came naturally, having previously followed this path with Elliott Erwitt for the last three seasons.”

Steve Curry commented how these locations have inspired him in shooting the campaign: “When I walk through an airport, I think, ‘This is the future.’ All airports look the same. They're steel and glass. You walk through a shopping mall in India and it could be in Cleveland. There's almost no difference. I'm more fascinated by the cultural uniqueness of a place. What is it that makes Yemen unique? Why would you want to go to Burma if it looked like everywhere else? We go to these places because we want to see how they live. We want to experience the food, music, and architecture. We want to see how they work. We like that difference. We like the unique culture that they have. That difference is what has always fascinated photographers. You're transported to a different place.  You want to be inspired.”