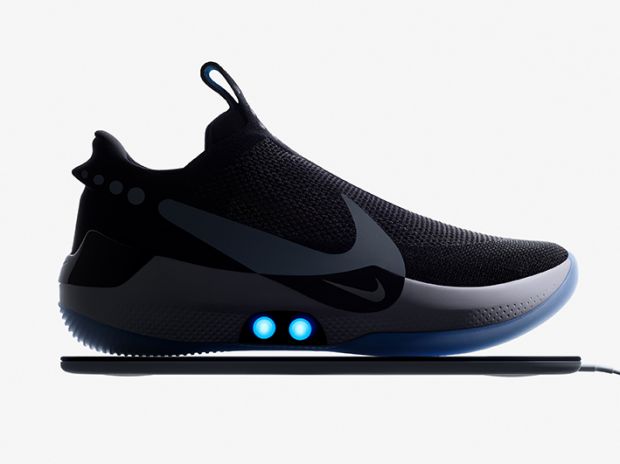 Are smart sneakers the next big thing?

Just recently two of the major sports companies introduced their new high-tech products. We had a closer look. 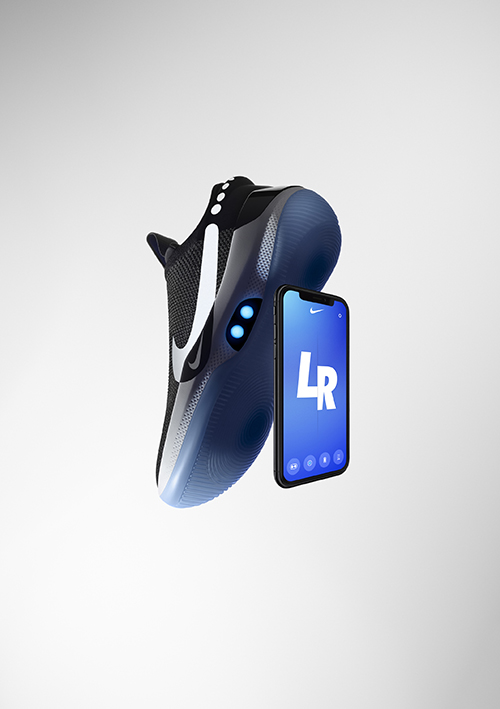 Photo: Nike
Nike Adapt, lace-free shoes that employs mechanical engineering and smartphone technology to give basketball players the perfect fit and maximum foot compression when on the court.

Nike Adapt
There’s been a lot of hype and buzz about Nike’s latest offering, Nike Adapt, which the athletic giant previewed for journalists at an elaborate press conference at its offices Manhattan earlier this month and which will be available for sale ($350 retail) for the first time during NBA All Star Weekend on February 15-17.

Futuristically modern and post-Space Age, these lace-free shoes employ mechanical engineering and smartphone technology to give basketball players (and probably other athletes down the road) the perfect fit and maximum foot compression when on the court. They then can be loosened when they are off of it. The shoes contain a motorized smart chip in the soles and their mechanical tightening or relaxing is achieved by pressing buttons in the shoe heel or via a new Nike app, which not only allows the athlete to preset and control the fit via phone but also has an option to change the color of the LED heel buttons. In coming years, this application could also be applied to sportswear and lifestyle footwear and give users the option of altering the color of their shoes’ uppers or the soles according to their fashion whim. The app can also work Fitbit-style and record the foot’s precise movements, how many jumps a player makes per game, etc.

However, smart shoes, like smartphones, need batteries and therefore recharging. Thus Nike Adapt kicks will need about a three-hour recharge every ten to 14 days, which is done via an accompanying wireless charge pad that the company also developed especially for the new series. 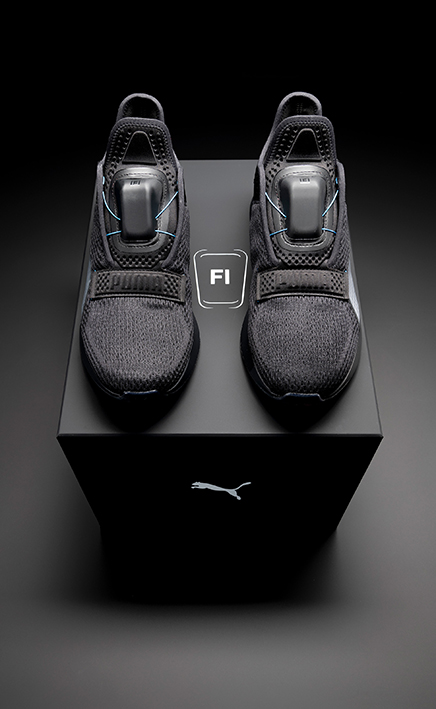 Photo: Puma
Puma's first Fi footwear style to be launched is a training shoe that is made for workouts and light running.

Puma Fi
Almost at the same time sports company Puma has introduced its technology platform Fit Intelligence (Fi) that is designed to automate and fine tune performance fit for Puma footwear.
The first Fi footwear style to be launched is a training shoe that is made for workouts and light running. It employs a micro motor to power a uniquely configured cable system that “laces” the shoe, either through simply swiping on the Fi module up or down. It comes with a smart sensing capability that learns the shape of the foot of each user and adapts the fit of the shoe to the individual. Athletes can also monitor, adjust and fine tune fit through a smartphone app. To make things even more athlete-friendly, users can make on-the-fly adjustments with their Apple watch. Through Fit Intelligence, Puma wants to make fit “intelligent and adaptive to each user”.

But Fi wants to even go beyond: Puma will allow tech-savvy people to participate in beta testing of Fi. The testers will be able to give feedback on the usability, design, engineering, and wearability of the shoe. In fact, anyone can sign up for the Fi Beta Test program through Pumatrac, Puma’s training app which is available on the App Store and on Google Play.

The Fi training shoe itself will be available for consumers in 2020.

SOME CONCERNS
While most are wowed by the new technologies, a few concerns have already been raised, which in the case of Nike were addressed at the press conference by a Smart Systems & Design Intelligence panel consisting of Jordan Rice (senior director of Nike Smart Systems Engineering), Mike McCabe (head of Design Intelligence) and Narissa Chang (lead mechanical engineer).

One was the issue of privacy. If a chip in your shoe is tracking your movements (and potentially even measuring them and sharing that data with Nike HQ) how can one be assured that he or she is not being “tracked” by the corporate giant? McCabe assured that “Nike is completely respectful of data privacy.” For Puma, it’s less tricky: “For the moment Fi has no tracking technology. The capability it has to sense is only designed to improve the functionality of the fit system. The RS Computer Shoe has tracking capability but data is captured in the user’s phone and remains private,” Charles Johnson, Puma’s global director of Innovation says.

The second was the safe environmental disposal of the shoes. In the case of Nike the company’s senior director of basketball innovation Ross Klein said: “The lifecycle is the same as any other product” meaning that if the wearer was especially hard on them that they might need replacing in just one year. Rice said that safe disposal of the electronic components in the shoe was a definite priority and that “e-waste stations” would be rolled out in Nike stores worldwide to collect – and safely dispose of – any discarded Adapt models so as not to harm the environment. At Puma there is no concern regarding the waste topic: “According to TUV, Fi is classified as an electronic product and has been measured and tested by those standards. It can be disposed of like any other electronic product. Batteries are replaceable and should be disposed of separately from the shoe.”

Finally, there was a practical point. Can the shoes – as technically electronic items – be worn through airport security checkpoints? The engineer-minded trio assured that they had worked with the TSA and other international screening agencies and guaranteed that traveling Nike Adapt wearers would not face charges of terrorism due to the cool (and wire-loaded) sneakers on their feet. Also at Puma, Charles Johnson is more than relaxed when it comes to these security control issues: “There is no problem with airport security when traveling with Fi shoes. The Fi passes all security standards. But there is no guarantee that a security officer will not respond with a smile when they discover what the shoes can do.“ 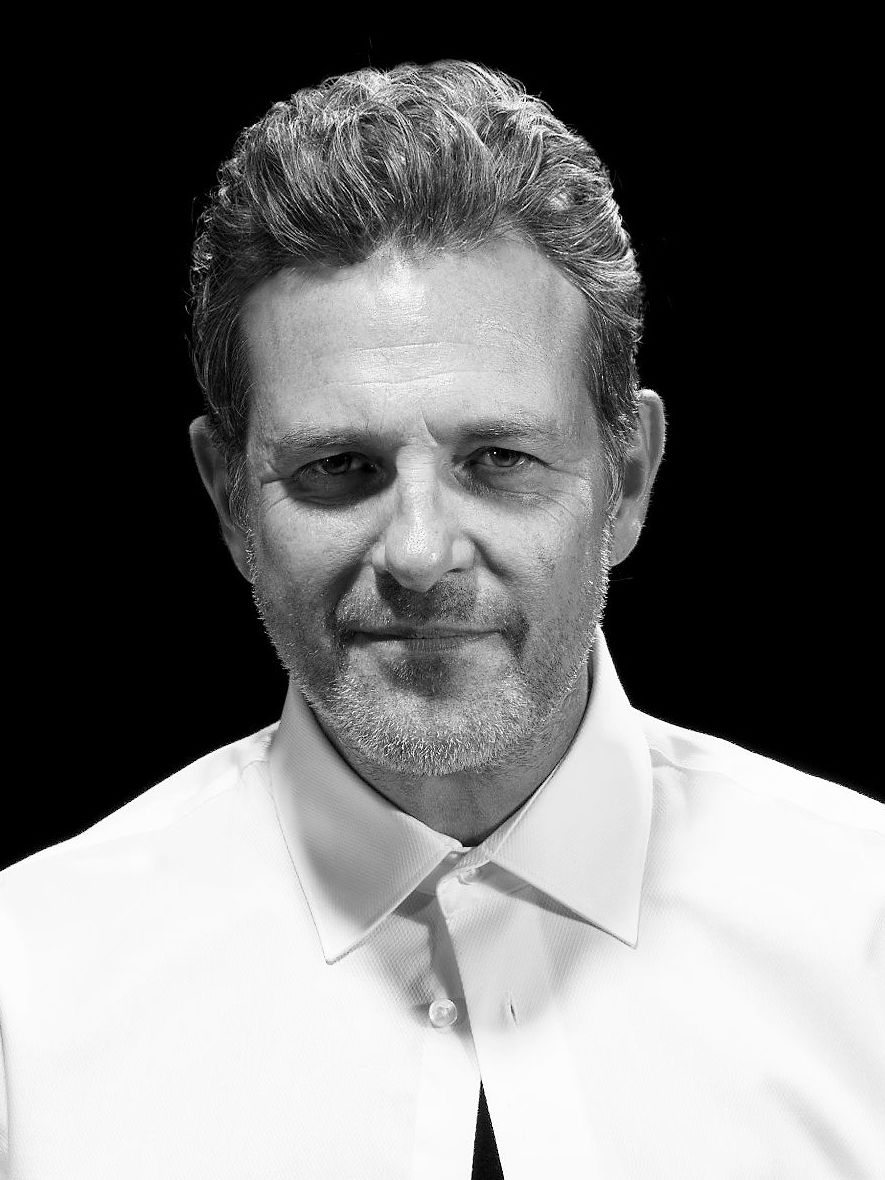 Discussing the art of sneaker innovation with Nike’s Mark Smith