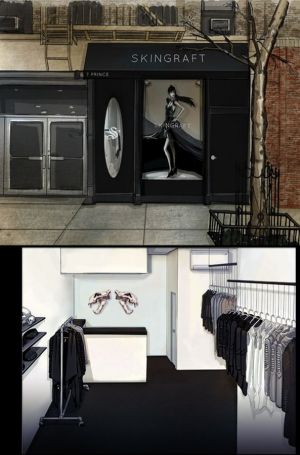 
Located at 7 Prince Street in the Nolita section of Manhattan, the 500-sq.-foot (46-sq.-meter) shop will celebrate its official grand opening a week from Tuesday, on May 7.

“This is my favorite area in New York City, it showcases many independent designers and it straddles the Bowery and SoHo which contain two very different types of people who are both our customers,” says Jonny Cota, the brand’s designer, about why the label chose Nolita for the location.

He heads the line with his brother and brand manager, Chris Cota.The new store carries Skingraft’s mens- and womenswear collections along with samples, accessories and limited edition pieces.

The brand also intends to work with local artists to include new artwork in the window displays each month. Throughout May an original Skingraft 3-D video called “Dark Light Cycles” will play in the shop.

The store is Skingraft’s second standalone in the US. Its flagship in downtown Los Angeles opened in spring 2009.