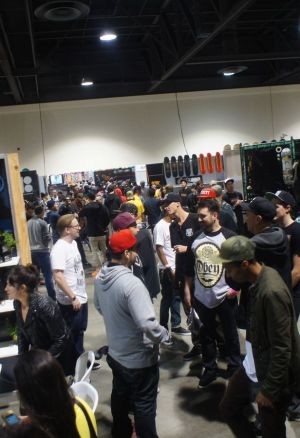 — January 09, 2013
The latest installment of Agenda Show, the go-to tradeshow for all things surf, skate and streetwear, was held Friday and Saturday January 4 and 5 in Long Beach, California. Aaron Levant’s enthusiasm reflects the influence and success of his show. “The show has grown to include almost 600 brands with a 15% increase in overall attendance,” he says. “The women's, lifestyle and accessories sections have seen the most growth with new collections including Nudie, Lucy Love, Apolis, Mutta Footwear, Komono, Sun Pocket and Topo Designs joining returning Agenda brands Volcom and Nike.

And, of course, all the other biggies were represented: from Hurley to Rusty, Obey, Stüssy, Billabong and RVCA. Even Frank’s Chop Shop was on site offering haircuts. While the big brands are important, a lot of the fun was in the smaller ones. Front and center was Shwood wooden sunglasses, a 40-year-old Oregon company that employs 35 wood workers to custom shape and cure sealed wood frames that retail anywhere from $145 to $350.

Zox straps sell colorful elastic wrist adornments that can be stacked and collected in limited edition designs of 1,000 or less. Us Versus Them was recently infused with Stüssy dollars which enables it to concentrate more on its staple line of tees, tops and bottoms with more surprise projects on the horizon for 2013.

MNWKA was founded in 2003 in Brooklyn and was at Agenda showing its alternative streetwear button-ups, fleeces and letterman jackets. Meanwhile, when Hawaiian brand Flip the Bird found that its record label’s cool tees were selling more than its albums, it switched to just apparel. It also now does limited edition sneakers with Russell Simmons and outfits everyone from Kanye to Eminem. 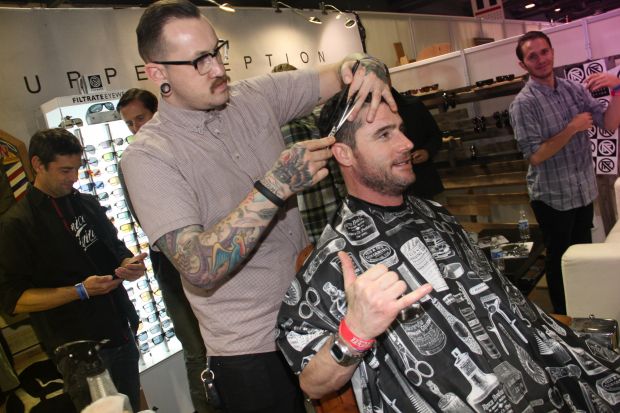 Mi-Pac came over from the UK in June, brining the substantial backing of 2,000 European retailers and affordable duffels, backpacks and iPad cases with it. Nearby, Superb showed its cut and sew spring summer 2013 items such as paisley button-ups, waxed cotton vests and flannel shirts. Ambig made the scene with checked button-ups and cool tees while Str/ke came down from Vancouver, bringing along its lightweight, unique forward-striking shoe.

Crocs continues to build on its famous plastic shoe, now offering a men’s golf line, molded boating shoes, retro sneakers and licensing for many colleges and universities to offer school colors. Street tee line Two in the Shirt, abbreviated to T.I.T.S., continues to sell shirts with its racy ads and salacious twists.

Across the way, apparel brand IRN-FST has been around since 2001 but will be introducing the brand’s first footwear line in 2013. And men’s and women’s jewelry line Uranium, from Montreal, made its third Agenda appearance in the company’s 14-year history, showing its delightful four collections of necklaces, earrings, rings and bracelets which represent beauty, strength, love and creativity.

Toes on the Nose president Richard Allred was thrilled at the brand’s first ever Agenda appearance where, he says, it started its 2013 season off right.

In another area, Recover brand was on hand. Launched three years ago, it makes real wood iPhone and iPad cases and skins which retail for around $38. Kustom footwear brought a huge display of wearable beachy flip-flops and low-profile sneakers.

Roxy showed its dependable line of short shorts and bikinis, adding a smart selection of bags and wallets that appeared quite popular with buyers. Channel Islands surfboards also was there, taking up impressive space with its collection of handcrafted boards plus apparel and sunglasses. Lost brand was found holding an enviable collection of board shorts, tees and skate decks.