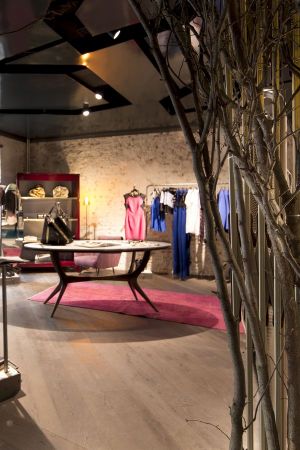 by Maria Cristina Pavarini — March 03, 2014
After the recent announcement by Benetton group regarding the restructuring its activities and focus mainly on their two major brands – United Colors of Benetton and Sisley–, Sisley has just announced its overall repositioning strategy with the opening of a brand new – and first worldwide – “rich & raw” concept store in Berlin.

“After careful studies we noticed that the Sisley brand was still strongly appreciated for its product, brand perception and impressive past ad campaigns,” commented Paolo Battacchi, head of Sisley managing the brand´s repositioning. “We thought this brand still had unexploited potential since it was still alive in consumers’ and insiders´ minds. One example above all was an interview run by SI Magazine in December 2013 with Citizen of Humanity´s Jerome Dahan who still clearly remembered when he visited the Sisley denim store in Paris that opened in 1968! We took that as a starting point.”

The 130sqm Berlin boutique opened on 27 February in one the most interesting and vital areas of the city, at 12 Neue Schönhauser Strasse, in the Mitte neighbourhood, a few steps from stores such as 14 oz. and The Kooples. Schwitzke Project was responsible for the entire direction and execution of the location's rebuilding.

The new Sisley concept is designed in order to express the same identity of the brand’s totally renovated fashion-minded identity. While maintaining the same elements that belonged to the original location – a restaurant - such as raw brick walls, narrow corridors, modern lacquered ceilings, oval shaped pieces of furniture and stylized chandelier lamps.

“In order to enhance the impact of the newly redesigned Sisley brand, each new shop will have its own distinctive nature and unique features,” explained Battacchi. “Future store openings will share the design ethos, but will always be different and will make use of distinguishing local elements.” Upcoming openings already planned include one in Padua (Italy) at the beginning of March, and Orio Center (near Bergamo, Italy), and soon after Rome, Naples, Venice and Tokyo by end 2015.

The collection focuses on a new contemporary and cosmopolitan mood, offered at a very interesting price-quality ratio. As the store concept that is hosting it, it is characterized by a contemporary-meets-bohemian spirit and is offered to women for two thirds and to men for one third of the selection. While offering a more compact selection of items, the collection will be delivered more often than in the past, by offering seven deliveries per season.

The collection offers dynamic, contemporary cuts for womenswear as is Berlin´s spirit of Berlin, as well as masculine-cut suits revisited with sleek, sexy proportions, body-hugging, colour-block dresses, waist-fitted trench coats, and Modernist jumpsuits. It also includes about 20% denim items, reflecting the brand´s origins, previously explained by Battacchi, which date back to its French debut in denim in 1968. On the other hand the men´s wardrobe has a more casual-chic attitude.

The brand´s repositioning started from Germany because it is a high performing market in terms of results, as explained by Martin Beuker, general manager for Germany, whose past experience includes ten years working for VF Group. “In Germany we closed 2013 with a +17% growth in sales on 2012. It is a great result considering that Germany is Sisley’s second most important market, counting for about 12% of the brand’s revenues after Italy (60%) and followed by Japan. This means that the strategy acted here is proving successful,” commented Beuker who joined Benetton slightly more than a year ago. “I´m proud that this relaunch is starting worldwide from Germany and from Berlin.” Further openings are also expected for this country where they aim to open in cities such as Hamburg, Düsseldorf, Cologne, Frankfurt by end 2014. This will also include some shops-in-the-shop opening in multibrand stores. Beuker adds: “With this new positioning, we see the potential for opening up to 100 stores over time in Germany.”