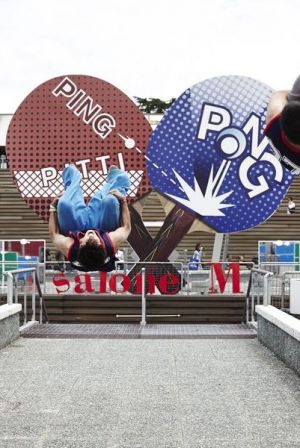 by Maria Cristina Pavarini — June 20, 2014
According to the first results collected during the first three days of the 86th edition of Pitti Uomo (until 12 am of 19 June), which started on 17 June 2014, in Florence, the international menswear show has registered almost 19,000 visitors, 4% more than a year ago. If the results remained steady, this would be the best results registered for years, especially thanks to the increased presence of foreign buyers and the gradual recovery of Italian retailers.

A positive atmosphere pervaded the first two days of Pitti Uomo, international menswear fashion event that kicked off on 17 June 2014, in Florence, Fortezza da Basso presenting novelties for the s/s 2015 season. Parallel to the show, a series of celebrations took place on the eve of Pitti Uomo, on 16 June, through a series of celebrations focused on the 60th anniversary of Italy’s Centro di Firenze per la Moda, also saluted by Italy’s premier Matteo Renzi who participated in the opening ceremony of this edition of Pitti Uomo.

The Pitti show was busy with both Italian and foreign visitors and the atmosphere positive and euphoric. Insiders recognize the high level of information at the show and its rich offer in terms of different products and segments. “Visiting Pitti Uomo has returned to be a must-go show for insiders who want to know the newest trends,” commented Roberto Ventura, owner of the Italian chain of stores Den Store. “If in the past companies brought less collections and products, now more and more are presenting their collections in order to show them to its international visitors.”

Among trends, the most transversal themes are flower prints and bold colors. Exotic plants and flowers decor outer jackets, trousers and sneakers as seen at Colmar, Gas, President’s and Add. Generally, bright hues such as Miami pinks, intense blues and most different shades of green – from emerald to bottle green – will be up-and-coming.

Another strong trend, mostly characterizing jeanswear and sportswear brands, is vintage motorcycling. Among companies that focused on this theme were 2M2W, Memory's, Roy Rogers for jeanswear and Blauer, who reinvented the biker jacket applying new materials such as perforated leather or nylon as well as a series of reinterpretations of the leather perfecto in lightweight down versions and fashion-minded interpretations.

A greater attention is devoted to Made in Italy denim as launched by Meltin Pot, who presented the special capsule collection Deep Yellow focused on 40 denim items (tops and 5-pockets) all completely made in Italy (including the denim fabric). Rifle made its debut with a completely new collection at a party held in The Cascine area, launching a modern cowboy selection of denim items.

A reborn item is the waxed coat reinvented in breathable, lightweight and highly flexible versions and – obviously - in a selection of bright colors.

A special debut was G-Star’s Raw for The Oceans designed in collaboration with singer and producer Pharrell Williams, created from innovative Bionic Yarn, a sustainable thread made of fibers from recycled plastic bottles found in oceans. (see our report).

Another novelty was Vibram’s new shoe study – Furoshiki, The Wrapping Sole, a special ergonomic sole covered with rubber applications that can be wrapped around the feet and fixed with Velcro. Its name is inspired by a special Japanese habit to wrap and carry objects with to the Furoshiki technique.

One of the show’s main inspiring trends was ping-pong and various displays and installations inside the Fortezza were characterized by this sport. Quite a few companies launched own capsule collections characterized by biking. Spiewak, for instance, collaborated with Japanese designer Kazumasa Kobayashi and his brand Narifuri. Together they reinterpreted four iconic Spiewak items with a modern and functional approach in terms of materials, details and garment design.

Among novelties in footwear, Clarks is celebrating its 60th anniversary by launching a re-edition of its original Desert Boot with orange stitching as well as a series of modern styles of its iconic boot in canvas, denim and with heels for women, redesigning a men’s sandal into a Japanese-like high-sole model for women. Crocs has just launched a special shoe model with a foldable highly flexible sole, while Reef sandals are betting on a more fashion-minded version of their surfer’s sandals, also after the recently launched special collaborations with top brands such as, for instance, Opening Ceremony.