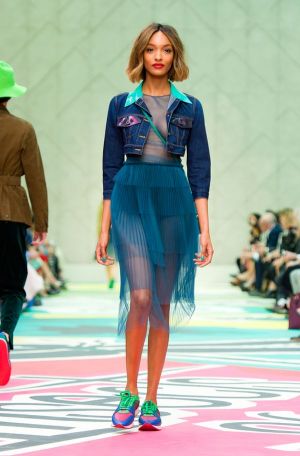 Burberry Prorsum’s take on the jean jacket, at LFW
Stories 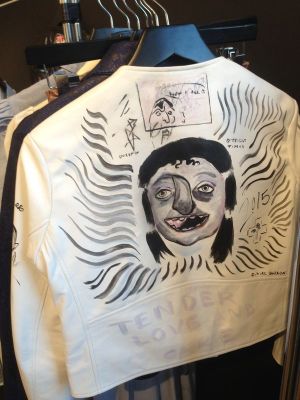 Illustrated piece by Claire Barrow
London Fashion Week’s SS15 edition bowed out on Tuesday night after ticking off 82 on-schedule showings. Some 170 names across ready-to-wear, accessories and footwear exhibited their spring offerings as part of the Designer Showroom exhibition at Somerset House. The Topshop sponsored NewGen area drew crowds as usual, partly owing to its quirky charity scheme inviting press and buyers to purchase products customized by some of London’s most intriguing young creatives. This season, the retailer commissioned Faustine Steinmetz, 1205, Ryan Lo, Claire Barrow and their fellow NewGen designers to submit an illustration each to be printed on tote bags with the help of digital printing device YR Store. All proceeds were donated to Fashion Targets Breast Cancer.

The general consensus among buyers was that London Fashion Week was in good form due to the artful inventiveness displayed by many designers. Christopher Kane dedicated his show to the recently deceased Central Saint Martins’ professor Louise Wilson by way of adding eruptions of tulle and elaborate rope embroidery – the type of embellishments he experimented with while studying under Wilson at the famous college. 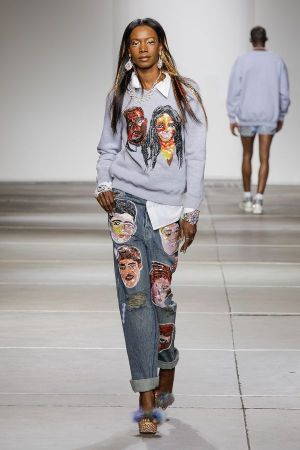 Ashish sequin embroidered tribute to One Direction, at LFW
The denim RTW trend that took hold during the men’s show circuit earlier this year made frequent appearances at LFW, too. Ashish’s proposition was one of the most entertaining. Sported by an all-black crop of models, boyfriend jeans featured heavy rips and a generous helping of the designer’s signature sequin art; one pair had been adorned with sparking portraits of the entire One Direction family. The asymmetric, frayed denim creations one has come to associate with Marques Almeida were presented alongside voluminously cut jeans with oversize turn-ups and fitted, collarless jean jackets with fraying necklines.
Meanwhile, Burberry Prorsum’s Christopher Bailey gave the classic denim jacket a makeover by cutting it above waist level and inserting contrasting materials to different elements of the garment, such as collars and pocket flaps. The juxtaposition of wildly different fabrics was a central theme throughout the Burberry Prorsum collection – think delicate silks teamed with sturdy denim or gabardine. 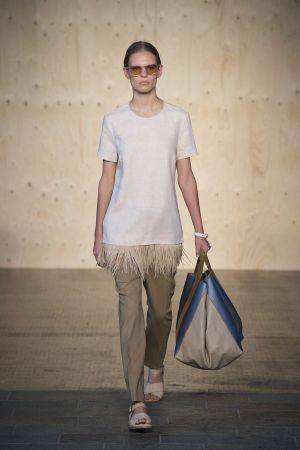 Paul Smith's playful material juxtaposition, at LFW
Paul Smith also relied on the allure of contrast by marrying crisp cotton poplin and fringing that sprouted softly from necklines and hemlines – a formula that gave the designer’s effortless signature style a tactile quality. A tendency impossible to miss as the week progressed was cuts allowing maximum collarbone exposure – Simone Rocha, Christopher Kane, Holly Fulton and J.W. Anderson all seem to agree that the shoulder is the body part to flaunt come spring ‘15. The shoe to don, meanwhile, is as flat as a pancake.

Bluesign: How to continue the roadmap towards more responsible action