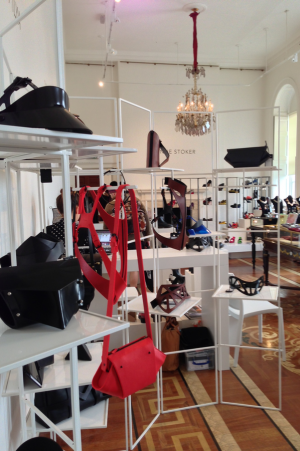 Fleet Ilya at The Exhibition at London Fashion Week
Stories

by Emma Holmqvist Deacon — February 19, 2013
The latest edition of London Fashion Week (15-19 Feb.) had undergone some changes in order to become more of a one-stop buyer’s destination. The Exhibition, which complements the catwalk schedule, had been curated by the BFI to include over 120 contemporary designers and RTW brands this season —about 60 of which were new to the event.

Divided into different sections within the LFW hub of Somerset House, the ground floor Terrace Showrooms served up all manner of footwear and accessories including bags and harnesses from label of the moment Fleet Ilya, hats by Stephen Jones and jewelry ranges by cult accessories agent Valery Demure. The Topshop sponsored BFC showcase NEWGEN is well established by now and revered for its ongoing support of emerging young London talent. This season saw the likes of Simone Rocha, J.W. Anderson and Palmer/Harding exhibit as per previous seasons, while newcomers included shoe designer Liam Fahy and Paula Gerbase’s contemporary tailoring label 1205, which focused on stark, considered cuts and an interesting array of fabrics including leather, denim and wool.

Another highlight of the event was The Scandinavian Showrooms, a new guest initiative encompassing a multi-brand showroom, a decidedly Danish looking bar area and a young designer installation in which tall and very blonde mannequins modeled progressive ensembles by the likes of Astrid Andersen and Ingvild Abrahamsen. Peter Jensen, Wood Wood, Henrik Vibskov and Altewaisaome were among the more established names who had been invited to exhibit their AW13 collections. This section could have been executed to look more inviting; in many cases, too many garments jostled for space on small rails, which made access difficult and failed to benefit the designers’ work.

To widen the general appeal of The Exhibition, the BFC had welcomed a slew of sale agencies this season. Indigofera unveiled the latest offerings by the likes of Victoria Beckham Denim and Paige, while M&L Harris exhibited Current Elliot and Equipment among others.

As for the catwalk shows and presentations, the AW13 edition of LFW had been infused with a decidedly international flavor. Flanders Fashion Institute took part by way of putting on an installation of architectural knits by Belgian talent Christian Wijnants. Receiving yet more attention during the week, Wijnant’s bagged the prestigious International Woolmark Prize with a series of pieces each created from a single yarn – a technique that wowed judges including Franca Sozzani, Donatella Versace, Diane Von Furstenberg and Tim Blanks.

LFW has a penchant for untraditional show venues and as a result London’s Tate museums diversified from art into fashion, if only for the duration of the event. Paul Smith presented his colorful collection at Tate Britain, while the Topshop catwalk space – which puts on shows by the likes of Richard Nicoll, JW Anderson and Unique down the runway– was housed within the tanks at Tate Modern. At the other side of town, Orla Kiely’s presentation was held in a vintage-style typing pool set-up, in which models clad in the Irish designer’s dainty ensembles dutifully went about their business. More rebellious in style, Fred Butler’s pop up shop showcase was a riotously colorful affair both in terms of interior design and product direction; the maverick’s exuberantly designed shoes, hats, jewelry and scarves were presented against a vivid backdrop of cyber cubist wall-art. London Fashion Week is known for its eclectic and creative nature, and although the BFI is clearly attempting to make the event more commercially relevant, it has done so without eradicating is most treasured assets.