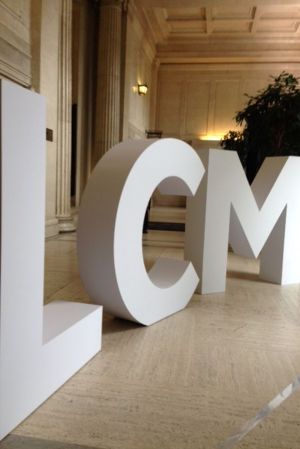 by Juliette Tafreschi — June 19, 2014
The fifth edition of London Collections:Men ended yesterday. From the 15th till 17th June, 68 designers participated in shows and presentations and the Designer Showrooms exhibited collections of 71 designers. The three official venues for catwalks and showcase spaces were The Hospital Club, The Old Sorting Office and Victoria House in Bloomsbury.

On the main floor of Victoria House accessories and shoe brands like Campbell Cole, Finlay & Co, ohw? and Tom Davies showcased their products. The overall style: clean, classic and simple, using a lot of natural fabrics and materials like wooden frames for sunglasses and soft leather for bags and purses.

Designer Paul Smith welcomed his guests at an offsite location at the Hauser & Wirth gallery in Savile Row for his spring/summer 2015 shoe presentation. “I’m very happy to be presenting my shoe collection at LC:M. Featuring both men’s and women’s Oxford shoes, the presentation demonstrates my love of simplicity and androgyny in women’s style. For the purposes of the presentation, 20 pairs of the same shoe have been created, each in different shade, nodding to the palette of s/s 2015 men’s catwalk collections. A digitally printed leather sole also offers a reference to the new season men’s collection which will debut in Paris on the 29th of June.

Menswear brand Kit Neale presented an installation at Victoria House showing their S/S 2015 collection ‘Kit Neale goes on holiday’. Colorful pastels, flashy greens and yellow tones as well as graphic prints like airliners, fruits, plants and comic symbols were printed on pants, jackets, dungarees, shirts and sweaters. As a part of the collection Kit Neale has incorporated an exclusive Coca Cola range. The designers have reworked some of the Coca Cola iconic imagery into fun, bright and vibrant prints.

Speaking of bold prints – this fashion topic was also one of the strongest one could see at The Hospital Club, where more than 44 brands like 3.Paradis, palmer//harding, Indefinitely Wild, Laurence Airline, Griffin, Christopher Raeburn and Vinti Andrews presented their spring/summer 2015 collections. Next to camouflage, shark prints or any other fantasy prints – camou and military influences mixed with sporty elements like mesh, leather and sporty tech fabrics were the second biggest trend.

The silhouettes in menswear in general stay slim for the next summer season but get mixed up with some strong basketball influences. Agi & Sam, Griffin, Christopher Raeburn and Astrid Andersen for example showed basketball shorts, raglan shirts, mesh tops and in contrary to the very slim silhouettes that were propagated by most of the brands set an emphasize on voluminous styles like the joggpants or bomber jacket.

New additions to the LC: M catwalk schedule this season included DKNY, Moschino, Joseph, Maharishi, Ede & Ravenscroft, Turnbull and Asser, Tiger of Sweden and Nicholas Kirkwood. Maharishi hosted the catwalk show in the basement of The Edition hotel. The dark and mysterious setting was the perfect surrounding for the Maharishi show. Hardy Blechman, head designer of Maharishi, took his inspiration from the Middle East showing alienated camou prints in sandy and dusty colors on cargo pants, shorts, jackets and sweaters. Best described as a strong sport performance influence mixed up with the layer look of a modern urban nomad.

A very different setting expected the visitors at Pringle of Scotland fashion show that was hosted in the Two Temple Place, one of London's hidden architectural gems, an extraordinary late Victorian mansion building.Massimo Nicosia, Head of Design Menswear at Pringle of Scotland took his inspiration from golf wear in the 1960’s and 80’s, Edwardian Dandy style and British underground sub cultures. The British tattersall check was one of the main features of the collection. Key piece was the cricket jumper.

Burberry Prorsum invited their guests to Kensington Gardens. Under a large tent and accompanied by British singer-songwriter, Benjamin Clementine, the Burberry Prorsum collection for S/S 2015 presented a very rich but darker color palette from deep-purple and bottle-green velvets and suedes to warmer tones like camel, turquoise and bright red. Even though the look and style was very sartorially, designer Christopher Bailey managed to give them a very laissez-faire and urban style look. Coats, pants and shirts were combined with flappy hats, sneakers and denim jackets which gave the whole look a lot of effortless.