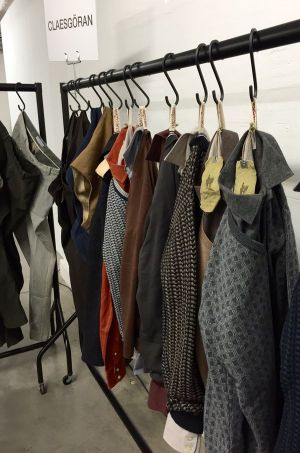 by Emma Holmqvist Deacon — February 09, 2015
An unusually busy edition of London menswear trade show Jacket Required (4-5 Feb.) closed its doors on Thursday night. Long queues formed outside The Old Truman Brewery and at certain times buyers had to wait for up to half an hour to enter. Inside, some 250 menswear labels had gathered to present their fall/winter ’15 ranges.

Noteworthy first-time exhibitors included Claes Göran, a new Swedish name that started out in the field of sneakers and has now branched into a full collection – a good move indeed. The feel is tactile and slightly rumpled– in other words, not typically Swedish at all – and detailing is as important to the concept as the choice of materials. Knitted grandpa style cardigans, loose fit trousers and reverse terry cloth tees were grouped together, casually hanging from hooks. Butter-soft flannel pajamas good enough to wear outside of the bedroom also featured. Accessories startup Wilberforce is another promising newcomer that served up a considered range of small leather goods, two-tone knitted beanies and tweed caps. CAT Footwear is having a moment; the Colorado boot is climbing ever higher on the trend barometer. Debuting at the fair this season, the brand presented its mainline, which has recently been picked up by the likes of Asos and Topshop, as well two separate ranges created in collaboration with young London designers Christopher Shannon and Alex Mattsson. The team-up between Californian sock purveyor Stance and Harley Davidson also stirred interest at the show; classic biker emblems gave the socks a rebellious and fun edge. 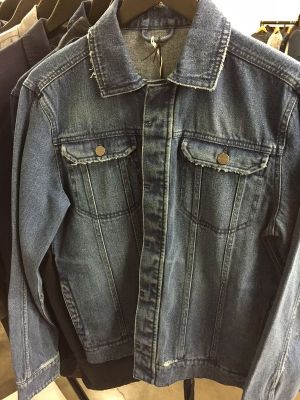 Wåven
On the denim front, gray and black formed the basis of many collections. Lee 101 achieved an interesting misty effect by sulfur dyeing its black denim, while Wåven added depth to its palette by incorporating tints of teal and khaki. The Scandi inspired UK based young label is developing with confidence– its outerwear was strong this season, particularly so the painter’s jacket interpretation and the slimline jean jacket with hidden button placket and gently fraying pocket edges. Amsterdam based Duel Denim is also progressing well. Its tightly edited range, which made for an attractive, uncluttered stand, reflected “the cycle of denim”. The spectrum started with a pair of dry denim jeans, and the styles that sat alongside it gradually took on a more faded and worn look, ending in soft gray shades and subtle distressing. Contrast knit sweaters and brushed cotton tees with raw-edged pockets complemented the denim offering.

Jacket Required has come a long way since presenting a cluster of indie labels at the Rochelle School in 2011. How do longstanding exhibitors perceive the expansion? Said Sandqvist co-founder Sebastian Westin, who’s been part of the Jacket Required brand-line up since the very first outing: ”The show has developed dramatically. Major growth usually spells the end of a fair since expansion often dilutes the DNA, but Jacket Required has managed to retain its identity and consistent brand-mix. It takes a while for a brand to establish a loyal following at a fair; we’re now at a point where buyers seek us out at Jacket Required season after season.”

Exhibitor statement seemingly on repeat: “The show is so busy, it just hasn’t stopped.”

The footwear colour of F/W ’15: cool gray – as spotted within Ohw? and CAT Footwear’s collections, among others.

The most fabulously skin-crawling print: Cheap Monday’s lifesize, natural-looking black flies printed on white tees in literal reference to the season’s theme – Lord of the Flies.