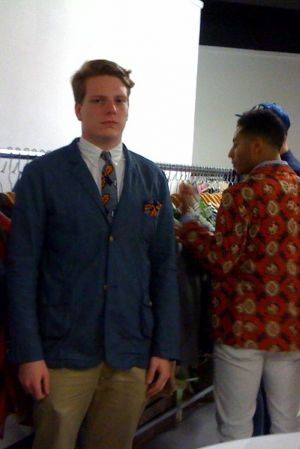 by Emma Holmqvist Deacon — July 16, 2012
London menswear show Jacket Required (July 13-14) came to a close on Saturday. This season, the fair attracted 107 labels across the categories of apparel, accessories and footwear. Many of the names on the list made their JR debut, including Denham, Levi’s Made and Crafted, Cold Method, and Lee 101. Danish contender Wood Wood also counted among the newcomers and the label presented a new variant of its perennial bestseller- the men’s legging. This time the comfy classic came in superfine merino wool that is softer than cashmere. Other Wood Wood news included a line of sneakers and a small selection of tailored garments.

Outdoor goods purveyor William Fox & Sons caught our eye last season when it extended its repertoire with a small selection of knitted sweaters in bright colors. This time round, the British heritage label introduced a full line of menswear that stood out for miles, but for all the right reasons. The core of the offering was jackets, shirts and shorts in exotic prints sourced from the South Pacific islands. While the aesthetic is slightly bonkers, it is still commercially viable and judging by the strength of the label’s last two seasons, it is one to keep an eye on.

Other strong entries included the wares of Common People, which showed a collection of 50s inspired leather biker jackets, selvedge denim, and nifty shirts with reversible collars. D.S. Dundee, meanwhile, served up a covetable range of outerwear as per most seasons. Other key pieces included sweaters in different guises, such as a reverse bird’s eye knit in blue and cream.

Swedish label Elvine’s international expansion continues apace and it recently appointed a new distributor in the UK, Self Service Showroom. Outerwear is considered to be Elvine’s strength, and this season the jacket expert teamed up with Sweden’s most respected rainwear purveyor, Grundén. The collaboration resulted in a mid-length hooded raincoat available in canary yellow and navy. Fellow Swede Our Legacy also showed at the fair, presenting an eclectic mix of wares that encompassed everything from double breasted jackets and 40s style trousers to cotton paisley tunics.

Our overall reflection on the show’s third outing: it has retained its direction and the brand line-up is consistent although the show has expanded considerably since it first launched three seasons ago. The atmosphere was relaxed and there was certainly a buzz in the air. Most exhibitors were positive and seemed pleased with the turnout of press and buyers in attendance. “This is the first time we’ve exhibited Levi’s Made and Crafted and Levi’s Vintage Clothing at Jacket Required and it has definitely been a success,” said Carlos Williams, UK Sales manager at Levi’s XX. “It is a well organised show with a local feel; and it is a particularly good haunt for UK buyers who might not have made it to BB.”