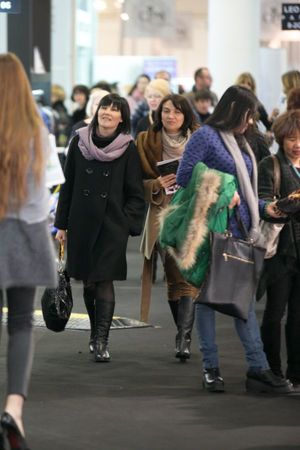 by Juliette Tafreschi — February 28, 2014
The 22nd edition of the Première Collection Moscow (CPM), which took place at the Expocentre Fairgrounds in Moscow (25th - 28th of February) ended today. In comparison with the other editions this was the first time the opening event was not framed by speeches, but instead with a short welcome introduction by former top-model and entrepreneur Marcus Schenkenberg, who also presented his casual men’s outerwear collection for the first time in the fashion & denim hall. Philipp Kronen, Managing Partner of the Igedo Company: “We didn’t want to make a long speech, so we just thought an introduction by Marcus Schenkenberg, followed by a catwalk show would be a good new way to hold an opening ceremony.” On the catwalk international and national brands like Blacky Dress Berlin, Hauber, Monari, Couture by Barbara Schwarzer and Bizuu presented their f/w collection 2014/15.

Another premiere was the CPM-Style segment, which featured casualwear as well as designer and evening gowns from international smaller brands in hall 8.3. “The CPM Style segment is our new baby. In this segment we also want to support young Russian and Eastern European designers and give them a chance to display their collections to a wider audience”, said Igedo Company project director Christian Kasch. Five designers are given the possibility to show their collections free of charge for two tradeshow editions.

Tamara Leschner, Head of International Sales, Timezone: “This is our third time at the CPM, but the other times we had our booth at the Forum segment and we were really happy about this. We really don’t like it here because you can hardly see it from outside. But the Russian market is important for us, so is the tradeshow. The Russian buyers are writing dream orders and Timezone is represented in the best department stores and boutiques in Russia.”

Dimitris Stokkos from the Greek brand BSB: “There are no people here and we are really thinking that this might be the last time for us. There used to be a much younger brand environment, but without Gas and Desigual it might be that the strong magnets are missing. We also don’t feel happy with the brands surrounding us; not every brand here belongs in this hall.” Ferdinando Baldini, Napapijiri: “We are asking ourselves why there are less visitors, and one reason might be that big brands like Diesel, Desigual and Gas are not here anymore – this is like a domino effect, but we hope that it will improve.” Besides the lack of visitors during the first two days, another problem was pointed out by Greta Meier, Head of Sales, Jette: “At the former edition the entrance was at a different place and visitors could go directly into the Fashion & Denim hall, but for this edition the entrance is connected with another hall and is kind of hidden, so people are not passing by.”

Even though there are some things that can be improved in the eyes of some brands for the upcoming Fashion & Denim hall segment, other brands like Mavi, Bench and Ben Sherman were optimistic and satisfied with the outcome of the tradeshow.