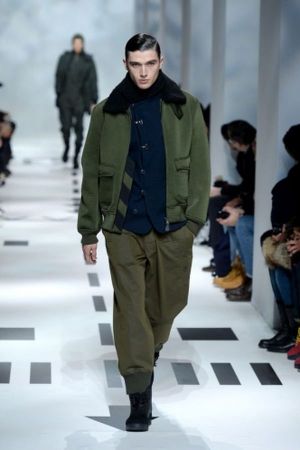 by Barbara Markert — February 03, 2015
The menswear Fashion Week in Paris closed last week after a crowded schedule of over 50 shows and nearly the same number of presentations on the  – so called –  “Off” calendar. Generally the French shows confirmed the trends seen before in London or Milan.  The color shades are mostly neutral and dark with hues like black, grey, aubergine, dark petrol, khaki and night blue. The trendy color “china blue”, as seen at many Italian and British fashion shows, was less adopted in Paris, but had a strong presents on the catwalks of Etudes, Y-3, Dior Homme, Y-Project or Umit Benan. Knitted pullovers in fancy colors and full of patterns replaced the sweater hype of the last seasons. Even Kenzo, the sweater trend setter, showed a new, knitted direction. 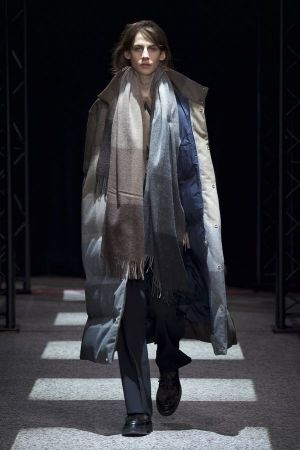 Paul Smith
Shearling leather is a big theme for winter 2015-16 also in Paris, as a result of a seventies revival in women- and menswear.  Even if the French, Belgian and Asian designers showing in Paris were less aware of this style revival and put more attention on a modern sporty and casual look instead of repeating 70’s stiffness.

With this focus on an easy-wear goes a fluid and loose-fit line, which we could already discover for summer 2015. A lot of floating and loose-cut coats walked over the runways. In consequence the materials are soft with fabrics out of wool, corduroy, velvet, silk, soft denim and knitted textures.

Besides these general fashion developments, Paris showed a couple of specific Parisian trends, which could play an important role for next season:

Layering
Layering is more a type of styling than a real fashion trend. But the art directors designed the clothes in a way that layering became an obvious style characteristic. Jackets are cropped, shirts stretched, pants shorted, pullovers and cardigans extended.  For winter man can wear two pants, one over the other, but one must be shorter than the other.  A skater-, boxer short or Bermuda can be styled over a normal pant. As seen on the catwalks of Dries Van Noten, Thom Browne, Rick Owens. Designers like Damir Doma, Givenchy, Kenzo, Boros Bidjan Saberi, Juun J., Miharayasuhiro, Y-3 or 22/4, who stretched pullovers and shirts in such an extreme way that they seemed to be a pinafore or skirt. Coats are no longer the last layer of an outfit; instead classical jackets or bomber jackets were worn over coats.

Vests
Vests are a big womenswear must-have in this upcoming summer season. In Paris the trend is extended to menswear. The vests are combined with suits or casual urban wear.  Raf Simons put it even in the center of the look: the model only wears a vest over a T-shirt. 22/4 Designer Stephanie Hahn produced vests in mohair fake fur worn over classic pants and pullovers.  Dior Homme used the vest as styling object over suits either in classical suit fabric or denim.  Givenchy transferred this trend into leather and into a shorter version. 3.1. Phillip Lim used the vest as coat in a parka styling.

Overall
Overalls and jumpsuits for men are not a very frequent trend, but in Paris the designers opt for this item. Even very classic orientated and luxury houses like Hermès, Juun J. and Dior Homme have models in their collection.  Etudes transformed it into dungarees; Umit Benan’s overall is a fisherman’s standard outfit. 3.1 Phillip Lim voted for a worker styling. 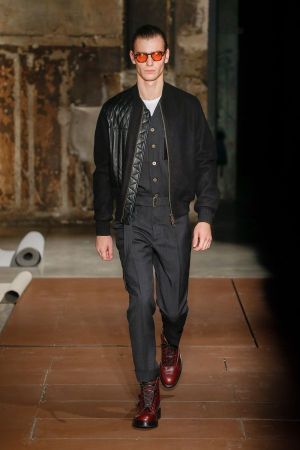 Cerruti
Big scarves
The casual movement goes together with a sentiment of cocooning. This demand of soft and cuddly clothes was responded by the designer with very big and long scarves out of cashmere, wool, fur or fake fur (like made by Paul Smith). On the catwalk you will find these scarves in a woven or a knitted version. Wonderful looks for this trend can be found at Hermès, Lanvin, Officine Generale, Wooyoungmi and Haider Ackermann.
Sometime the shawls are as big as ponchos or mantles. Seen on the catwalk of Issey Miyake, 22/4, Kolor, Miharayasuhiro, Christophe Lemaire or Walter Van Beirendonck.

Intarsia fabrics and material mix
As bright colors are rare this season and flashy patterns are missing, the designers play with material mixes on the clothes. Jackets, coats and even pants (Hermès) are constructed out of different materials and fabrics.  Or the designers used the same fabric in different color shades, i.e. grey, blue-grey and dark-grey.  Mixed together into a jacket, it looks like a mosaic or an intarsia, as seen at Givenchy, Thom Browne, Andrea Crews or Rick Owens. The most beautiful pieces of these trends showed Kris Van Assche, Kolor and Dries van Noten with very sophisticated and unique jackets and knitwear. Valentino brought this trend to perfection and created wonderful parkas and duffle-coats out of denim, wool and leather. In a more classic way, Yohji Yamamoto and Dior showed wonderful worked pieces mixing wool and leather. Miharayasuhiro mixed different denim shades and pullovers made out of patch-worked pieces.