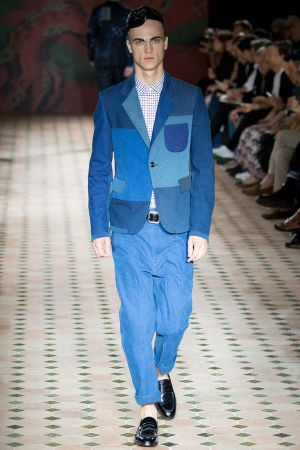 by Barbara Markert — July 04, 2014
The French capital revives jeans, street- and sportswear in a couture way.

The menswear fashion week in Paris closed Sunday night, traditionally with the show of Saint Laurent by Hedi Slimane. This season the schedule was packed as never before. At least eleven shows a day were on the official calendar of the Chambre Syndicale, which were accompanied by many off-side shows, presentations and showrooms.

New trends and movements in menswear already seen at the Milanese fashion week were confirmed in Paris. In general, the silhouette becomes more casual and relaxed. Pants are cut wider, t-shirts and pullovers are worn in a loose fit and often oversized, and layers are used in nearly every collection.

The revival of jeans
As the classy and conservative high-class brand Christian Dior and the avant-gardist Yohji Yamamoto showed in their collections, different looks in denim might be a clear sign that jeans are back in designer fashion. The audience even discussed the revival of the designer jeans. But the styling of denim couldn’t be more different. Hedi Slimane remained faithful to his super skinny, rock ’n’ roll cuts. Kris Van Assche, for Dior, showed a thick and mostly bleached denim in a very 80’s style: straight cuts and rolled-up cuffs combined with striped tees and pull-overs. A flair of the 80’s could also be seen in the collections of Kenzo and AMI by Alexandre Mattiussi, who send out jeans in familiar destroyed looks and presented some vests and shirts. Christophe Lemaire et Agnès B. went for a more sophisticated and stiff styling in a total look in different dark denim qualities. Junya Watanabe transferred the trend in funny patchwork-jackets, which he combined with very loose fit jeans in a ¾ length. Maison Martin Margiela played with the material in the brand’s typical avant-garde way: The design team matched together one denim and one cotton leg. Surely the most fashionable and newest style of denim was presented by the Japanese designer Mihara Yasuhiro, who worked the material in a very couture way of well-cut jackets and trousers with a lot of artisanal details with open edges as decorative elements. 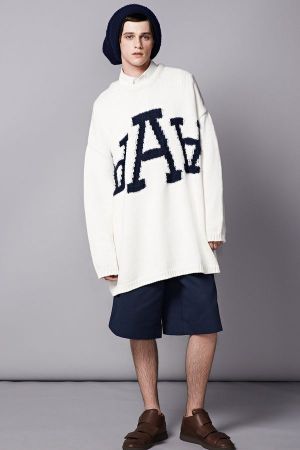 Acne Studios ss'15
Streetwear goes designer fashion
Details of streetwear entered many collections and were a characteristic element of the looks. Layers were a leitmotiv of this fashion week in Paris. Oversized tees and pullovers with colored prints as worn by street performers and rappers were seen on the catwalks of Henrik Vibskov, Andrea Crews, Acne Studio, Givenchy, Juun J. and most surprising in the collection of Cerruti 1881, which rejuvenated the style of the house in a younger modern way. The typical wide baseball pants with Bermuda length, worn by street kids, emerged in collections of Rick Owens, Paul Smith, Kolor and Julien David. These designers often styled this streetwear-element in a surprising way, combined with formal jackets or super-long, slender shirts.

Sporty elements for a new look
Sports are an important inspiration for the womenswear in this summer season. For the summer 2015 the trend idea flows into menswear. Never have we seen so many jogging trousers on the catwalks in Paris.  The pure cotton-sweat-pants walked over the catwalk at Lanvin, Dries van Noten, No editions, Gosha Rubchinsky and Y-3. In a modified form with a high-waist elastic band the jogging pants was presented in cotton, summer wool or in synthesis as seen by Carven, Cerruti, Dior, Juun J. or Kolor. Nylon jackets were copied from sportswear by designers like Sacai, Mihara Yasuhiro, Junya Watanabe, Agnès B. and Acne, contributing a sporty touch to formal outfits. 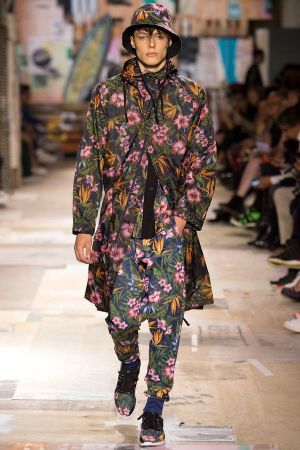 Y-3 ss'15
Like in Milan and Florence, floral prints and artistic prints could be observed in Paris, but not in the same extend as seen on the Italian catwalks. Besides a lot of stripes in various forms, the Parisian designers pit on mixing up uni-colors. Apart from the trend colors red and yellow, they set a focus on different blues: from the Klein blue to the navy blue. Another strong design message from Paris is: The low waist for pants disappeared and was replaced by a high-waist going up to midriff.

Surely one of the most important designer-items for next summer, which can be found in nearly every collection in Paris, is a trench, parka or summer coat. Mostly in floating materials like nylon or linen with a length reaching down to the knees.  This trend could be observed on the catwalks of Boris Bidjan Saberi, Carven, Cerruti, Issey Miyake, Kenzo, Lanvin, Louis Vuitton, Rick Owens, Sacai and Valentino, amongst others.