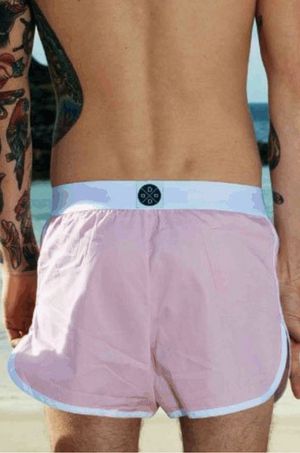 by Emma Holmqvist Deacon — February 13, 2013
Margin (10-11 Feb.) returned to the London trade show circuit after a season’s absence, a break brought about by the awkward timing of the summer Olympics. Held at The Music Room on South Molton Lane in central London, the comeback event focused on young labels exclusively.  “Margin’s main premise has always been to offer start-up labels an affordable platform, but as from this season we will set out to introduce buyers to even fresher names, many of which present their first ever collections,” said show organiser Odysseas Constantine.

Newbie DaDa Underwear was conceived to make the process of buying boxers fun, as opposed to a tedious chore. Crafted from ethically produced bamboo fibre, the briefs and trunks that form part of the collection come in an array of fresh colours, often with contrasting waistbands. Equally light-hearted in style, Netty Ratti offered a selection of tops featuring motifs fashioned from expertly applied cross-stitching. Korean streetwear label Drink Beer Save Water also focused its efforts on less traditional tee adornments – each print has been fitted with an extra little feature; the simple “Pen” print, for instance, doubles up as a penholder, while another top transforms entirely with a few tugs to become a tote bag.

Young in feel but high-end in execution, Mona Mara’s British-made jewellery line impressed. Pedant motifs ranged from London cityscapes to cats and keys, and the designs are available in either solid sterling silver or gold plated varieties. London Based name Klushka presented its third collection this season, focusing on hand-printed pieces such as oversized tees and slouchy dresses.

Margin is a small-scale show, but despite its far from sprawling format, it fills an important gap in the trade show landscape. Its renewed focus to only showcase the youngest of the young will allow for a new mix of labels every season.